We use cookies to provide you with a better experience. By continuing to browse the site you are agreeing to our use of cookies in accordance with our Privacy Policy.
Home » II-VI completes acquisition of ANADIGICS. Finally.
Industry News RFIC Channel

Culminating a surprisingly prolonged auction that began last November, II-VI completed the acquisition of ANADIGICS on March 15. II-VI is paying approximately $78.2 million in cash for ANADIGICS' 6-inch wafer fab, which it will use to produce vertical cavity surface emitting lasers (VCSEL).

II-VI, self-described as a "leader in semiconductor lasers," is adding capacity to support the projected demand for VCSELs, being driven by expected growth in hyperscale data centers. Complementing the ANADIGICS purchase, II-VI acquired EpiWorks for $43 million to add capacity for 6-inch epitaxial growth.

In a press release, II-VI said it has begun its evaluation of the respective assets and integration plans with the leadership teams at ANADIGICS and EpiWorks. Since II-VI is not a player in RF, its intention for ANADIGICS' RF products — which had been ANADIGICS' focus — is a major question.

Without the scale and capability to compete in mobile, in June 2014, ANADIGICS pivoted to products for CATV, Wi-Fi and small cell infrastructure, building on a strong legacy and position in CATV. The transition from mobile to infrastructure was slower than expected, and ANADIGICS' revenue and cash continued to decline. This led the company to agree to be acquired by GaAs Labs for approximately $32 million. The deal, announced on November 12, 2015, allowed ANADIGICS to explore "superior" offers. On December 16, the company said it had received a better offer, which led to several rounds of bidding between GaAs Labs and unnamed competitors. By January 19, GaAs Labs had dropped out, and ANADIGICS announced it had reached a deal with II-VI for approximately $61 million.

However, that deal did not stand. A Chinese company, referred to as Party B, submitted a "superior" offer that led to more rounds of bidding. Although unlikely that the U.S. government would approve a Chinese buyer, the ANADIGICS board continued negotiations and the back-and-forth auction between II-VI and Party B. With the company's cash and market position dangerously eroding, the board defined a last round of bidding. II-VI prevailed, buying ANADIGICS for $0.85 per share, 2.4 times higher than the original GaAs Lab price of $0.35 per share. 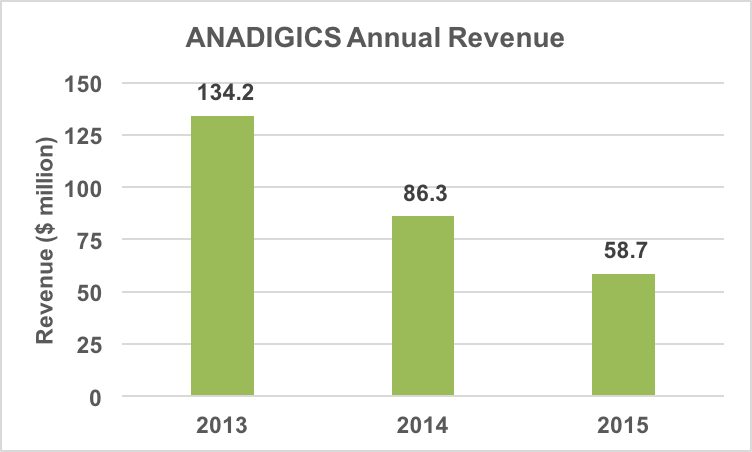 II-VI Inc. to acquire EpiWorks Inc. and ANADIGICS Inc. for a combined $110M