We use cookies to provide you with a better experience. By continuing to browse the site you are agreeing to our use of cookies in accordance with our Privacy Policy.
Home » Fujitsu develops GaN PA with world's highest output performance for W-Band wireless transmissions
Cellular 4G/LTE Channel Industry News 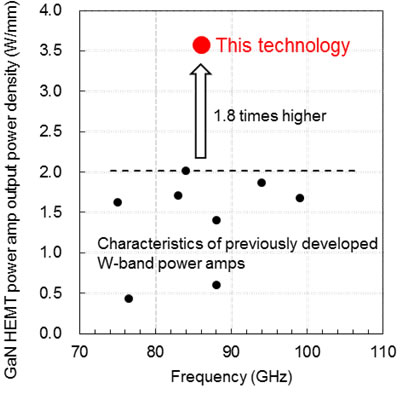 Fujitsu Ltd. and Fujitsu Laboratories Ltd. (collectively "Fujitsu") announced the development of a gallium-nitride (GaN) high-electron mobility transistor (HEMT) power amplifier for use in W-band (75 to 110 GHz) transmissions. This can be used in a high-capacity wireless network with coverage over a radius of several kilometers.

In areas where fiber-optic cable is difficult to lay, to achieve high-speed wireless communications of several gigabits per second, one promising approach is to use high-frequency bands, such as the W band, which uses a wide frequency band. In order to get good long-distance coverage in these frequencies, however, it is necessary to increase the output power of the power amplifier to the scale of watts.

Fujitsu succeeded in developing a power amplifier for W-band transmissions using GaN-HEMT technology capable of high output at 100 GHz. Evaluations of the newly developed power amplifier confirmed it to have 1.8 times increased output performance than before, which would translate to an increase of over 30% in transmission range when used in a high-speed wireless network.

A portion of this research was conducted as part of a project of the National Institute of Information and Communications Technology (NICT) on "Agile Deployment Capability of Highly Resilient Optical and Radio Seamless Communication Systems."

The newly developed power amplifier achieved a 1.8 times increase in power-amplifier output over previous W-band power amplifiers, with the world's highest output performance (Figure 4). This translates to an improvement of over 30 percent in terms of range for wireless communications at speeds of several gigabits per second.