We use cookies to provide you with a better experience. By continuing to browse the site you are agreeing to our use of cookies in accordance with our Privacy Policy.
×
Stay Connected :
Home » Anritsu's new software supports manufacturing tests of IoT and M2M devices
European Industry News Industry News IoT/M2M/V2V Channel Software/EDA Channel Test and Measurement Channel 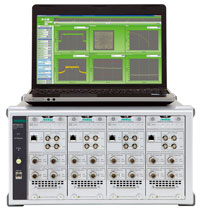 Anritsu Corp. has announced the availability of three new measurement software packages expanding the functions of the MT8870A Universal Wireless Test Set to support manufacturing tests of IoT/M2M applications. With these new releases, Anritsu the company has added support for 802.11p, Bluetooth DLE, and Z-Wave to its measurement software product line for the MT8870A, covering a frequency range from 10 MHz to 6 GHz.

The rapid expansion of the IoT/M2M applications market is increasing the need for wireless testing of communications terminals and modules. The majority of these products support both mobile wireless systems, such as LTE and W-CDMA, as well as short-range 802.11a/b/g/n/ac and Bluetooth in one unit, requiring a fast, all-in-one, test set for measuring multiple wireless systems.

The MT8870A Universal Wireless Test Set has been specifically designed for the high volume manufacturing test of all common cellular and short range wireless technologies. An MT8870A instrument mainframe can contain up to four MU887000A/01A TRX Test Modules each capable of independent control by an external PC. Each module has an integrated Vector Signal Generator (VSG) and Vector Signal Analyzer (VSA) to perform both transmitter and receiver RF tests.

The new MX887032A/MV887032A software package supports 802.11p RF tests for the 700 MHz and 5.9 GHz bands to be used for automotive roadside and vehicle-to-vehicle wireless communications. When used in combination with the MT8870A PC application software, it supports RF tests of 802.11p compliant chipsets, modules, dashboard equipment, and can also be used to configure a fully automated test environment with control of device chipsets.

The new MX887040A-001/MV887040A-001 software package supports wireless tests for the latest Bluetooth Core Specification version 4.2, which expands the Bluetooth low energy data length from 37 octets to 255 octets to improve system throughput by reducing the data transmission overhead and speeding-up communications between a host device, such as a smartphone, and a nearby sensing device, such as a wearable.

The new MX887061A/MV887061A software package supports ITU-T G.9959 Z-Wave RF tests. Z-Wave is a low-power wireless technology using the 900 MHz band and targeting the home-automation market, such as home security and remote control of home appliances. It incorporates both Wi-Fi, enabling connection between a smart-home router functioning as the home-automation hub, smartphones and PCs, as well as mobile communications like LTE to connect with public networks and the Internet.