We use cookies to provide you with a better experience. By continuing to browse the site you are agreeing to our use of cookies in accordance with our Privacy Policy.
Home » First 50 GHz Handheld Analyzer Speeds Field Work

The engineers and technicians who install, maintain and troubleshoot radar and satellite systems face difficult challenges and compromises. The challenges are usually logistical and often environmental, as they work in remote locations, perhaps aboard a ship or aircraft, and deal with potentially harsh weather conditions. Many of the compromises involve the equipment they carry into the field. Getting sufficient accuracy often means using benchtop-caliber tools, and making the full range of necessary measurements means transporting more than one bulky instrument.

Today’s alternative is Keysight’s family of FieldFox handheld analyzers. This month, the company released six millimeter wave models. Among these, the flagship is the industry’s first 50 GHz handheld microwave (combination) analyzer. The new models expand a lineup that already included RF units and microwave models, introduced in 2008 and 2012, respectively. The new models provide laboratory-grade spectrum analysis, vector network analysis and cable and antenna test (CAT) in a rugged, portable unit that weighs 7.1 lbs, including the internal battery. With these capabilities, FieldFox can replace three or four single-function instruments — benchtop or handheld — that are typically used for maintenance and troubleshooting of systems that operate at or above Ka-Band. It provides unprecedented functionality and convenience at about half the cost of each equivalent benchtop instrument.

FieldFox analyzers are optimized for field testing. With its fully sealed enclosure — no fans or vents — FieldFox is compliant with US MIL-PRF-28800F Class 2 standards and also type tested meeting MIL-STD-810G requirements for operation in explosive environments (Method 511.5, Procedure 1). The analyzers are also type tested to meet IEC/EN 60529 IP53 requirements for protection from dust and water.

The new models include three combination analyzers that cover 32, 44 or 50 GHz. The other three are spectrum analyzer models that cover the same frequency range. In all six new analyzers, spectrum measurements are up to eight times faster than those made with comparable units. Displayed average noise level (DANL) is -135 dBm/Hz at 50 GHz, and amplitude accuracy is ±0.6 dB from 9 kHz to 50 GHz. In vector network analysis mode, dynamic range is 90 dB, and trace noise is ±0.008 dB, both at 50 GHz.

Radar is used in applications as diverse as traffic enforcement, weather prediction, civilian air traffic control and military air defense. To enhance system uptime and ensure favorable outcomes, routine maintenance, impromptu troubleshooting and occasional repairs are essential. When working on radar components and systems in the field, it is often necessary to measure time and frequency domain performance over a range of test conditions. Given the complexity of today’s systems, maintainers must also coordinate and compare waveforms in both domains. They may even need to test and tune the various functional blocks or line-replaceable units (LRU) within the radar system.

Covering all of the necessary measurements often requires three or four separate instruments. For example, a peak power meter is used to measure the absolute amplitude of a transmitter as a function of time, and a spectrum analyzer is needed to measure absolute amplitude as a function of frequency. When performing relative measurements, the peak power meter can measure the relative time and amplitude of a waveform, but a vector network analyzer (VNA) or vector voltmeter is needed to measure amplitude and phase as a function of frequency. FieldFox combination analyzers provide the same measurement capabilities of the four instruments described above. With the addition of a peak power sensor, FieldFox provides a solution that can easily be carried to a test site for measurements of the time and frequency performance of a radar system. A combination analyzer also has the functionality needed to test to the LRU level. Supported measurements include full pulse analysis capability to 40 GHz with a USB peak power sensor and relative timing measurements of the transmitter main versus auxiliary pulses. FieldFox analyzers also support stable local oscillator (STALO) phase alignment through the vector voltmeter mode.

Fast, accurate characterization of cables, waveguides and components helps increase system uptime and reduce mission risk. The ability to use a single instrument improves personnel efficiency and reduces the cost of ownership with just one instrument to purchase, learn and maintain.

Satellite systems are used for broadcast, bi-directional data, navigation, remote sensing and mobile communications. Every system has space and ground segments. A typical ground segment has at least three sub-segments: satellite control system, gateways and hubs and user terminals. The control system provides tracking, telemetry and command (TT&C). Communications, including voice, video and data are carried between the gateways, hubs and user terminals. 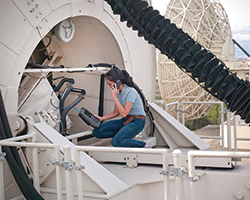 The highest performance benchtop VNAs and signal analyzers tend to have high-end prices. An R&D lab may only have one or two of each, and these will be shared by engineering staff. Limited access can mean delays in characterization, debug and troubleshooting of new designs or the latest board turns. FieldFox makes it possible to affordably equip engineers to make a variety of must-have measurements up to 50 GHz. This helps designers and developers stay productive when someone else is using the shared high performance benchtop instruments. Users can measure with confidence, because FieldFox measurement results agree with those from trusted Keysight, Agilent and HP instruments. Also helpful, an engineer can easily carry the analyzer to a unique or stationary device to be tested, thanks to its portable form factor and battery operation.