We use cookies to provide you with a better experience. By continuing to browse the site you are agreeing to our use of cookies in accordance with our Privacy Policy.
Home » Nuhertz Technologies introduces FilterSolutions 2015 at IMS
Industry News MTT-S IMS Software/EDA Channel 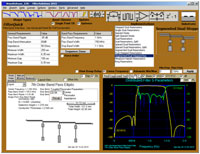 Nuhertz Technologies is pleased to introduce FilterSolutions 2015 edition as Version 14 at IMS2015 in Phoenix, Ariz.

Among the new capabilities incorporated in this release are new ways of using FilterSolutions with National Instruments/AWR simulators. The automated Fast EM Port Tuning feature is extended to also allow the use of Sonnet Software's electromagnetic simulation in addition to the existing Axiem automated port tuning capability.

Fully supported FilterSolutions term licenses can be purchased for periods as short as three months. For further information, please refer to the Nuhertz website www.nuhertz.com.