We use cookies to provide you with a better experience. By continuing to browse the site you are agreeing to our use of cookies in accordance with our Privacy Policy.
Home » Compact and Portable Antenna Measurement Tool 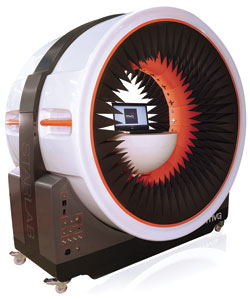 A large anechoic chamber traditionally represents a dedicated infrastructure, with extensive real estate and building expenses. Add to that temperature and humidity control driving up power costs and a dedicated crew operating the chamber with one or more specialists. This is why Microwave Vision Group (MVG) created StarLab as a compact and portable, all-in-one antenna measurement tool.

StarLab is a multi-capability product that performs 3D passive measurements in spherical and cylindrical geometries. It can also characterize antennas in 3D OTA (spherical measurements). The system is based on patented probe array technology. The StarLab system offers the speed advantages of a probe array, while the mechanical rotations in azimuth and elevation allows for unlimited angular resolution over the full 3D sphere. By adding a linear positioner, the StarLab system can be converted to a compact cylindrical near field measurement system. This system is particularly well-suited for measurements of base stations and other sectorial type array antennas often used in radar applications.

Because StarLab is compact and portable, it can perform measurements inside a shielded chamber, but can also perform passive measurements without the necessity of a test chamber. The StarLab doesn’t require special power or temperature control.

StarLab has recently undergone a complete transformation to give it extended capabilities, as well as a new look for an improved user experience.

The StarLab system is a compact, near field measurement system, with field sampling performed by a wideband probe array. The array is composed of a number of evenly spaced elements along the circumference of the support structure.

In the spherical near field configuration, the antenna under test (AUT) is positioned in the centre of the system on top of a very low dielectric column. The full-sphere measurement is performed by electronically scanning the probe array in elevation and rotating the DUT 180° in azimuth (seeFigure 1). This enables a full 3D measurement to be performed rapidly (seeFigure 2).

The probes are dual-polarized, wideband printed elements specifically designed and optimized for probe array applications. The probe array elements are mounted on a circular arch and embedded in multi-layer conformal absorbers, keeping the reflectivity of the probe array at a minimum. The internal diameter of the StarLab probe array is 90 cm, measured from the tip of one probe to the tip of the probe on the opposite side. The probe array can rotate mechanically 11.5 degrees in either direction, thereby increasing the number of measurement points by an integer factor (oversampling factor). This feature enables the user to perform measurements with an unlimited number of sample points (seeFigure 3). 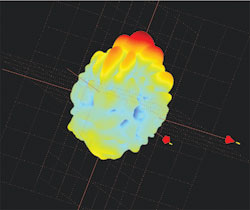 In spherical near field configuration, StarLab usage is targeted at the characterization of electrically small antennas and wireless terminals for development, pre-qualification or pass/fail production purposes. By adding a linear positioner to the system, StarLab can be converted to a compact cylindrical near field measurement range, ideally suited for measuring fan-beam antennas that concentrate the radiation in primarily one plane. The number of near field samples in the azimuth plane can be adjusted by the rotation of the probe array and the sampling along the AUT can be adjusted independently according to the frequency and dimension of the AUT.

The StarLab system in cylindrical configuration validated the radiation performance of the Consilium Selesmar X-Band radar. These kinds of aerials are slotted-waveguide, flare based, aerials built to sustain the high peak power of a magnetron. The microwave radiator under test was 9 feet long (2.74 meters) and emitted fields were vertically polarized, thus the waveguide was slotted on the narrow edge.

IEC 62388, which defines marine navigation radar characteristics, requires that azimuth side lobes of antennas must be under 28 dB between ± 10° from maximum gain direction and under -30 dB elsewhere. The radar antenna was tested in the 9.3 to 9.5 GHz frequency range. The measurement of the radiation pattern confirmed the compliance of the antenna performance with the antenna specifications in terms of side lobe level at 9340 MHz.