We use cookies to provide you with a better experience. By continuing to browse the site you are agreeing to our use of cookies in accordance with our Privacy Policy.
Home » 6 in 1 Oscilloscope Instrument 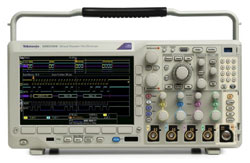 The Tektronix MDO3000 Series of mixed domain oscilloscopes offers the convenience of six integrated instruments in a single compact package, including a spectrum analyzer, logic analyzer, protocol analyzer, arbitrary/function generator and digital voltmeter/frequency counter. With this level of integration, the MDO3000 clears the design bench of costly, specialized equipment and provides the tools needed to test and debug virtually any embedded design, even those involving time and frequency domains. The MDO3000 is highly customizable, enabling designers to select the functionality and performance needed now, and then increase capabilities as their measurement needs change or budgets allow.

With the complexity of modern embedded designs increasing, coupled with the growth of wireless, it has become challenging for many organizations to give designers all the tools they need for efficient debug and troubleshooting. By offering the functionality of six independent instruments without the significant cost of separate units, the MDO3000 lowers capital costs while saving space and improving usability. It also reduces the time engineers have to spend tracking down test instruments from around the lab as the need arises.

The MDO3000 Series oscilloscopes provide two or four analog input channels with bandwidth ranging from 100 MHz to 1 GHz, 16 digital channels and one RF input channel matching the bandwidth of the oscilloscope (9 kHz up to analog bandwidth). The RF input frequency on any model can be extended to 3 GHz.

The MDO3000 instruments are offered with 3.9 pF passive voltage probing. For higher speed applications, 1 GHz passive voltage probes are offered standard with 1 GHz instruments. These low capacitance probes minimize the impact on devices under test while reducing signal distortion and cleanly passing the signal to the oscilloscope for measurement. 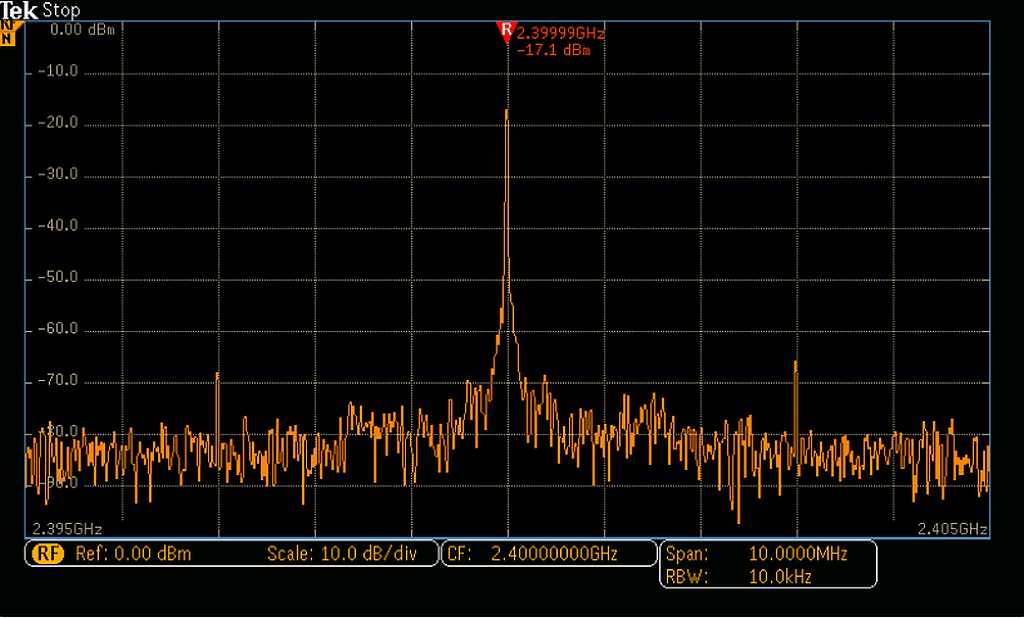 With the MDO3000 Series, engineers can start with the minimum performance and functional levels they need to accomplish the project at hand with the knowledge that their test platform can be upgraded in the field. Performance upgrades include analog bandwidth of the oscilloscope and input frequency of the spectrum analyzer. Functional upgrades include the addition of digital channels, protocol analysis, arbitrary function generation or digital voltmeter measurements.

When using the spectrum analyzer input, the MDO3000 Series display becomes a full-screen frequency domain view as shown in Figure 1. Key spectral parameters such as center frequency, span, reference level and resolution bandwidth are all adjusted using the dedicated front-panel menus and keypad.

In a traditional spectrum analyzer, it can be a tedious task to turn on and place enough markers to identify all the peaks of interest. The MDO3000 Series improves this process by automatically placing markers on peaks that indicate both the frequency and the amplitude of each peak. The user can adjust the criteria that the oscilloscope uses to automatically find the peaks. 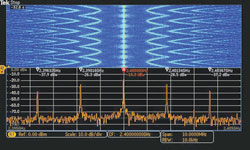 Figure 2 The MDO3000's spectrogram display illustrates slowly changing RF phenomena such as a signal that has multiple peaks which is being monitored here.

The instrument also includes a spectrogram display as shown in Figure 2 for monitoring slowly changing RF phenomena. The x-axis represents frequency, just like a typical spectrum display. However, the y-axis represents time, and color is used to indicate amplitude. Modern wireless communications vary significantly with time, using sophisticated digital modulation schemes and, often, transmission techniques that involve bursting the output. These modulation schemes can have very wide bandwidth as well. The MDO3000 Series addresses these challenges with up to 3 GHz of capture bandwidth. The spectrum is generated from a single acquisition, thus guaranteeing the user will see targeted events in the frequency domain.

Signal input methods on spectrum analyzers are typically limited to cabled connections or antennas. But with the optional TPA-N-VPI adapter, any active, 50 Ω
TekVPI probe can be used with the spectrum analyzer on the MDO3000. This enables additional flexibility when hunting for noise sources and enables easier spectral analysis by using true signal browsing on a spectrum analyzer input. In addition, an optional preamplifier accessory assists in the investigation of lower-amplitude signals. The TPA-N-PRE preamplifier provides 10 dB nominal gain across the 9 kHz to 3 GHz frequency range.