We use cookies to provide you with a better experience. By continuing to browse the site you are agreeing to our use of cookies in accordance with our Privacy Policy.
×
Home » Connector System for Mobile Communications Market 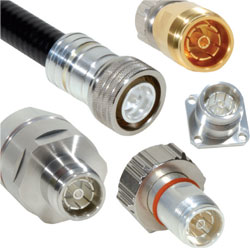 With the new 4.3-10 connector family, the industry is responding to the changing demands for modern mobile communications infrastructure and addressing the fact that as base stations and antennas become more compact, the large size of existing connectors can be a restricting factor. In particular, as more and more frequencies are released for mobile communication carriers, the problem of passive intermodulation (PIM) is increasing. And in the field, the connectors that would normally be used often resulted in problems if they were not mated with the correct torque.

When designing the new connector, the most important requirement was to decrease size and weight compared to the 7-16 connectors used previously but without losing the possibility of feeding the signals of several mobile carriers over a single line. With a maximum 500 W CW transmission power at 2 GHz, the 4.3-10 connector system has more than enough power capability for today’s and even future demands. An inner diameter of 4.3 mm combined with a 10 mm outer conductor are more than adequate for this kind of power. Furthermore, the footprint of the fixed socket has been reduced from 1.26 × 1.26 inch in the 7-16 system to 1 × 1 inch, and the weight reduced by 60 percent.

A totally new connector design was required because of the well-known PIM problems of existing connectors. The PIM performance of all currently used systems relies on the torque applied to the coupling nut. If the nut is accidentally not tightened correctly, poor intermodulation values are the result – a nightmare in today’s multi-carrier and multi-frequency mobile networks. 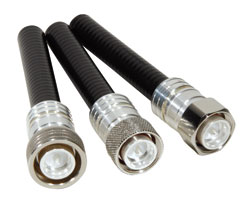 Figure 1 The three coupling mechanisms include the existing screw type and two new ones: a hand screw version and a push-pull type.

The 4.3-10 connector system separates the mechanical and electrical reference planes, which was not the case in previous systems. Instead of a direct contact dependant on the torque of the coupling nut, a spring loaded radial bushing is used for the outer conductor. This means that no additional coupling force is needed and the connector is immune to PIM. PIM is excellent even when mechanical force is applied to the connection, which is also a requirement of IEC 62037.

The concept of the separated mechanical and electrical reference planes has some other advantages too. Since mechanical pressure was no longer an issue, besides the existing screw type, it was possible to design two new coupling mechanisms that do not require any installation tools: one hand screw and a push-pull type. All three (shown in Figure 1) have excellent PIM performance even under mechanical stress, allow for a very high packaging density of one inch and use the same universal socket.

With these characteristics, the new connector system is very versatile and allows for installation in confined conditions where tools cannot be used. In effect, the 4.3-10 connector system opens the door for a new and more compact generation of mobile communication components.

The 4.3-10 connector system is designed for frequencies up to 6 GHz, which covers all the current mobile communication standards. All contacts and seals are protected against mechanical damage, which gives the system excellent mechanical properties and ensures its role as a modern alternative to the established connector systems in mobile communications.

The new system is currently in the standardization process at DKE (German Commission for Electrical, Electronic & Information Technologies of DIN and VDE) and the International Electrotechnical Commission (IEC). Connectors, test and measurement equipment as well as jumpers will be available by the end of 2013.