We use cookies to provide you with a better experience. By continuing to browse the site you are agreeing to our use of cookies in accordance with our Privacy Policy.
Home » RF Simulators for Next Gen Phased Array Radar
Aerospace and Defense Channel 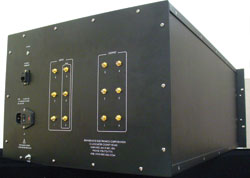 The next generation of phased array radar systems currently being developed by military research laboratories and major defense contractors is expected to eliminate shortcomings in older systems for faster target detection, higher detection sensitivity and clutter mitigation. As a result, this research and development is concurrently driving demand for commercial testing and quality assurance products designed to simulate RF signals as they would appear in the field at varying distances and in more crowded urban environments.

With more sophisticated receivers comes the need to test them during the research and development phase. Although custom one-off testing units are a possibility, the market is beginning to respond with commercial testing devices that simulate an RF signal as it travels and bounces off objects. Renaissance Electronics Corp., a manufacturer of RF and microwave subsystems and components, is now offering a 6 × 6 (REC part number 18A6NAD) and 12 × 12 (REC part number 18A6NAC) matrix with programmable delay lines (PDL) and attenuators designed to simulate RF signals for next generation systems.

The units synthesize both amplitude and phase to replicate a variety of phase array RF signals at different distances. Each of the available inputs can be programmed to synthesize a 30 to 2500 MHz RF signal that is electronically attenuated up to 91 dB in 1 dB steps and to simulate signal propagation and absorption loss, along with delays up to 5 ns to simulate the natural effects of distance. Armed with such RF signal simulators, military research laboratories and defense contractors will be able to move past the “proof of concept” phase and verify the sensitivity and accuracy of the next generation of receivers.