We use cookies to provide you with a better experience. By continuing to browse the site you are agreeing to our use of cookies in accordance with our Privacy Policy.
×
Stay Connected :
Home » Healthy Defense Industry Activity Marred by Lackluster Revenues
Aerospace and Defense Channel 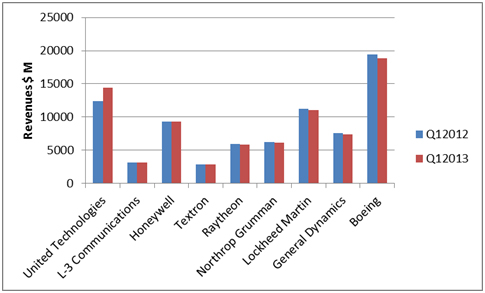 Taking a snapshot of financials from companies including Boeing, Lockheed Martin, Northrop Grumman, Raytheon and United Technologies, revenues were by and large flat for most companies for the first quarter of 2013. The defense industry continues to focus on streamlining operations and ensuring profitability as revenue growth slows, stagnates or declines. While revenues stayed on a par with the prior year, most company outlooks point to full-year revenues declines as purchases are offset and uncertainty around future expenditure remains. 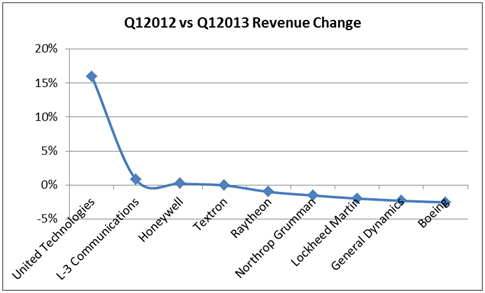 However, revenues are not the whole story and activity around contracts, business tie-ups, product launches and milestones remained robust over March and April. March saw several key systems passing tests such as the Northrop Grumman AN/TPS-80 Ground/Air Task Oriented Radar (G/ATOR) and Raytheon testing a dual-band datalink with a Thales Nederland Advanced Phased Array Radar (APAR). The competition to upgrade fourth generation fast-jet platforms with fifth generation capabilities such as active electronically scanned array (AESA) radar is also starting to heat up with offerings from Raytheon and Northrop Grumman targeted at the F-16 platform. While the competition for the US fleet is yet to be initiated, the first skirmish between the solutions has gone the way of Raytheon’s "Raytheon Advanced Combat Radar" (RACR) AESA radar selected by the Republic of Korea to upgrade the country's KF-16C/D Block 52 Fighting Falcon fleet.

There were a number of new semiconductor products released over March and April targeted for use in defense systems and platforms. TriQuint was announcing products in conjunction with GOMACTech 2013 with the release of broadband integrated packaged solutions that combine a limiter with LNA for use in radar and electronic warfare as well as a 25W Ku-band GaN RF power amplifier for satellite communications. Comtech Xicom Technology also focused on GaN with the introduction of a compact and highly efficient GaN-based amplifier for X-band MILSATCOM service in March and followed this with a GaN 6-to-18 GHz RF amplifier for electronic warfare, radar transmitters, and communications applications in April. API Technologies also expanded its GaN power amplifier line targeting electronic warfare, RCIED countermeasures, and national security jammer applications. GaAs-based products were also in the offing with OMMIC announcing sampling of three new production ready X-band power amplifiers as well as GaAs-based products from Custom MMIC and M/A-COM Tech.