We use cookies to provide you with a better experience. By continuing to browse the site you are agreeing to our use of cookies in accordance with our Privacy Policy.
Home » Device Characterization Methods for Advanced RF/Microwave Design
Software/EDA Channel 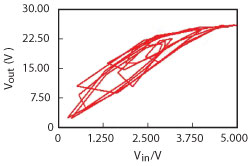 Figure 1 Nonlinear memory effects cause the current operation condition to be a function of the previous operating conditions.

The second option is that of system-level simulation, which usually involves a fixed time step time-domain simulator that commonly relies upon an underlying technology known as “data flow.” A more practical way of thinking about system-level simulation is to associate it with the creation and analysis of modulated signals or to think about the typical system-level simulation results such as error vector magnitude (EVM) — important for quantifying the performance of a digital radio transmitter or receiver — and adjacent channel power ratio (ACPR) — for determining the amount of spectral spreading. 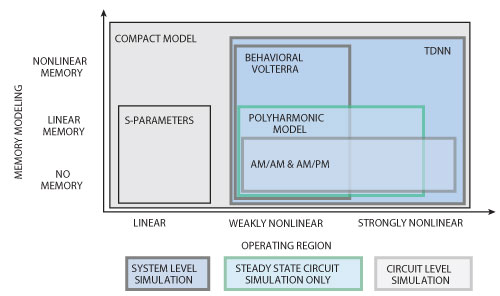 Figure 2 Types of models, including memory range and operating region range, and the relevant simulator technology.

It is important to understand the different kinds of models that exist, the effects that they are capable of capturing and the simulators in which they work. The y-axis in Figure 2 shows model memory and ranges from those without memory effects — or a model that does not even capture frequency dependence — to those with fully nonlinear memory effects.  The x-axis in Figure 2 describes the operating region of the device and spans from purely linear to strongly nonlinear, or in other words, very deep into compression for an amplifier. The different box colors indicate the simulator engines in which the models are most appropriate (converge to a timely and accurate solution).

S-parameter models are well known and widely used by almost all RF and microwave engineers. From the color and position of the S-parameter box in Figure 2, it can be seen that S-parameter models can be used with all circuit-level simulation engines, that they support linear memory or frequency-dependent behavior, and that they only model a linear device-operating region. This should be of no surprise to the RF and microwave engineer.

Compact models include Materka, VBIC, Angelov, BSIM3 and others. As shown in Figure 2, these models work with all of the circuit-level simulation engines and have the capability to capture all memory effects and cover all device operating regions. One important caveat is that an individual compact model will only be as good as the data from which it was extracted and the data ranges in which it was extracted over. Thus, the theoretical capability of a compact model might not be reflected in the ones that designers work with on a regular basis.

On the circuit-level simulation front, polyharmonic distortion (PHD) models include Agilent’s X-parameters®, S-functions, the Cardiff model and others. These nonlinear behavioral models are interesting in that from a user perspective, they seem to be S-parameters that also capture nonlinearities. In doing so, they cover an expanded device-operating region when compared to S-parameters. Presently, however, they are still limited to linear memory effects, or frequency-dependent behavior. In addition, they only really support steady-state or harmonic balance circuit-level simulation.

A standard way to represent an active device in a system simulator is with AM to AM and AM to PM curves. This approach is good in that it captures all the operating point nonlinearities, but it has limited linear memory effect capability and no nonlinear memory effect capability. The behavioral Volterra model, on the other hand, can capture all of the memory effects, including the nonlinear ones, but is somewhat constrained with regard to device operating region because of the practical limits on the number of model coefficients. Time delay neural network (TDNN) models, as Figure 2 shows, have the capability to handle all memory effects and all device operating regions, which makes these models very exciting from a system-level simulation perspective. 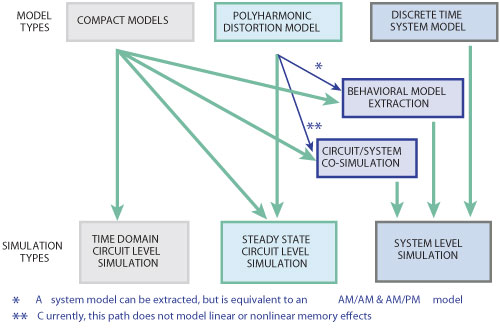 PHD models, on the other hand, are slightly more constrained. They only work directly in steady-state circuit-level simulators, and, while there are paths to use them with system-level simulators, there are a couple of issues to consider. The first is that when they are extracted as system-level behavioral models, the resulting behavioral model will always have the same model fidelity as the model from which it was extracted, regardless of its potential capability. Since PHD models do not model nonlinear memory effects, the resulting system models do not contain nonlinear memory effects. Another consideration is that when used in a co-simulation mode between circuit-level simulation and system-level simulation, neither linear nor nonlinear memory effects are considered due to the model formulation and the co-simulation engine characteristics. 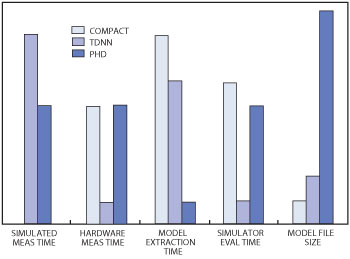 So how do the models mentioned previously compare to one another with regard to extraction and distribution? The comparison chart in Figure 4 shows the relative performance of the compact model, TDNN and PHD models, including the time to gather enough simulation data to make the model, the time to measure enough data on the test bench to make the model, the time required to extract the model from the input data, the average target simulator evaluation time and model file size. With reference to both time and file size, it goes without saying that shorter and smaller are always better.

With test bench hardware, however, things are a little different. The compact model and the PHD model require a fair number of measurements so they take relatively more time to measure than the TDNN model, which simply needs to capture modulated waveforms on a vector signal analyzer (VSA).

Once the data is gathered for model extraction, compact models usually employ an iterative series of calculations and optimizations, which are relatively time consuming. The TDNN has a neural network that needs to be trained, which means there is some time investment involved, but overall it’s simpler than compact model development. The PHD model has a very low extraction time, in part because it is calculated as the data is being gathered so there are no explicit extraction steps that the model creator needs to run.

With regard to simulator performance, there is some apples-to-oranges comparison here, but in general compact models and PHD models run at the same speed, assuming that poorly formulated or poorly written compact models are not considered. The TDNN runs nearly instantaneously in system-level simulation (i.e., it runs at the same speed as any system level model).

For model file size, compact models are as good as it gets. They only require the storage of tens or hundreds of numbers. The TDNN model is also relatively compact, often generating files that are only tens of kilobytes. The PHD model, on the other hand, can quickly grow to become quite large. A model with 40 load and source impedance points, 10 input power points, 20 frequency points, three harmonics, and five source and drain bias points is approximately 2 GB. To make matters worse, for many devices, that number of points might not be sufficient.

The world of nonlinear behavioral modeling is fluid, complicated and, at least today, there is not a-one-size-fits-all solution to the problem. In a way, it could be compared to the Beta versus VHS debate of decades ago, but with a lot more options and a lot less capability overlap. Despite the confusion, however, there are still some important conclusions that can be drawn.

First, simulation tool support is very important. With all the model choices, designers need to be able to choose the model with the best availability and capability and know that their design tools will support it. Some companies support all of the models and the breadth of simulation engines as shown in Figure 2.

Second, PHD models, generally speaking, are in light demand at present as component-level simulation blocks, but not for discrete parts. Industry feedback is that this is due to file size issues, as previously mentioned, and the measurement and extraction complexity for adequate device models. Even for component-level simulation blocks, the lack of model fidelity when co-simulated with a system simulator presents an issue to designers trying to work with modulated signals or analyze system-level impairments. Compact models, although complex to create and not always formulated to maximize performance in a simulator, are very much the dominant model for circuit-level simulation.

Lastly, it appears feasible to have a relatively simple test bench setup in a single PXI chassis that would allow any user to extract a TDNN model that handles all device operating regions and accounts for all nonlinear memory effects in a very reasonable amount of time and without any specialty model development knowledge. The advantage of a TDNN approach is not only a robust model but also an efficient model/solution within this domain.

While several solutions exist today that link RF and microwave design tools with test and measurement equipment, enabling engineers to produce a simulation model of their active device and providing the ability to build, test and validate design cases earlier in the product design cycle, more are surely on the way.