We use cookies to provide you with a better experience. By continuing to browse the site you are agreeing to our use of cookies in accordance with our Privacy Policy.
Home » PIM Test Power Levels For Mobile Communication Systems
Cellular 4G/LTE Channel

In 1999, the International Electro-technical Commission (IEC) released Standard 62037 providing the wireless industry a consistent test method for measuring Passive Intermodulation (PIM) in RF components and systems. Over the next 12 years, wireless technology evolved from 2G systems serving primarily voice traffic to 4G systems serving high-speed data users. These 4G systems require new network architectures with broadband modulation schemes to achieve the required increase in network capacity. This article reviews the applicability of IEC 62037 for qualifying components, subsystems and systems used in today’s commercial telecommunications infrastructure and specifically addresses whether or not there is technical merit in increasing PIM test power levels from 20 to 40 W.

Why Do We Measure PIM?

PIM occurs when two or more high power RF signals encounter nonlinear electrical junctions or materials in an RF path. These nonlinear junctions behave like a mixer causing new signals to be generated at mathematical combinations of the original RF inputs. If these signals fall in a network operator’s receive band, the noise floor rises causing reduced data rates and decreased service quality.

PIM is often caused by inconsistent metal-to-metal contacts in high current density regions such as inside transmission lines, inside RF components, or outside the system but in the main beam of an antenna. Common sources of PIM are:

PIM testing identifies the presence of these defects using RF transmission as the stimulus and highly sensitive receivers to detect and measure the response. PIM testing is the ultimate measure of construction quality of RF components, subsystems and systems. It will identify mechanical, as well as material defects in workmanship that may go undetected by more conventional techniques such as visual inspection or S-parameter measurement.

In the early days of commercial telecom, it was understood, based upon experiences of other communications systems and most particularly satellite communications, that PIM could produce interference conditions that were performance impacting. Recognizing this, mobile operators and OEMs impressed upon their component suppliers (manufacturers of antennas, cables, connectors, filters, lightning protectors, etc.) the need to provide “Low PIM” solutions. However, there was very little guidance of what “Low PIM” meant.

Left to their own devices, component manufacturers around the world began specifying the PIM performance of their products using varying and inconsistent parameters. Some manufactures only conducted PIM tests in their engineering laboratories claiming that their products were “Low PIM” by design. Others conducted PIM tests on each unit produced to verify not only the design but also assembly workmanship. Some certified higher order PIM products such as IM5 or IM7 depending on theend-user’s band of operation. Finally, some manufacturers specified peak PIM while applying mechanical stimulus (dynamic testing) while others measured the best case PIM achieved with the DUT at rest (static testing).

This arbitrary and haphazard approachmade it impossible to compare products and performance. To establish consistency, IEC Technical Committee 46, Working Group 6 was formed to create an industry standard for Passive Intermodulation testing. The PIM Working Group was comprised of OEMs, component manufacturers, universities and national standards organizations.

There were many energized debates among the working group constituents that ranged from academic, to practical, to sometimes political. There were arguments about how many carriers should be used, how much power was needed, what IM products to measure, how to define repeatable and meaningful dynamic tests, and whether PIM testing was even necessary since only high order IM products could land in the operator’s own receive band. 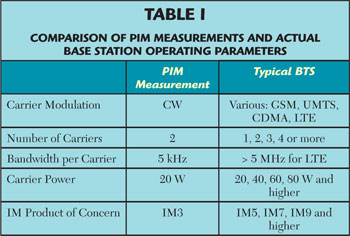 An update to IEC-62037 was published in May 2012 with more specific instructions for testing of antennas, connectors, cables, cable assemblies and filters. This new revision contains the same fundamental recommendations as the original specification: measure IM3 using 2 × 20 W test tones and adds clarity regarding a third key requirement for PIM tests:

Some PIM test equipment manufacturers have claimed that PIM testing should be conducted at 40 W rather than the IEC recommended 20 W level in order to “spot problems that cannot be seen on a 20 W PIM tester.” Further claims are made that 40 W is the correct power level to use since it is more representative of “real world” BTS operating conditions.

To determine whether or not there is validity to these arguments, first consider the claim that PIM testing should represent “real world” BTS conditions. As seen in Table 1, PIM test parameters have very little to do with the particular air interface, number of carriers, or power level deployed at a site. Rather, the test parameters were selected to define an accurate method to measure the degree of nonlinearity present in an RF path. Presented further in this document, 20 W is more than enough power to accurately measure nonlinearity in RF components as well as in completed feed systems. 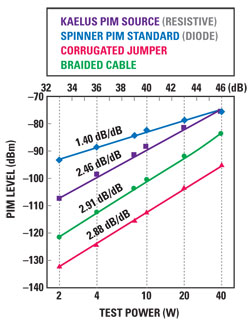 These are exactly the same issues that the IEC working group faced back in 1999. Their challenge was to develop a test that was “fit for purpose” and not constantly changing based on individual manufacturer’s claims. The IEC team analyzed this problem over several years and produced the test specification that the industry has relied on ever since.

To address the claim that higher test power will unveil PIM problems that cannot be seen using the industry standard 20 W test, one must understand how PIM behaves with increasing test power as well as consider the test as a whole rather than by its individual components. The magnitude of PIM produced by a given defect is dependent on the physical characteristics of that defect. Looking at the data in Figure 1, one can conclude that the Spinner PIM standard (produced using a diode in its construction) creates the highest level of PIM and that the corrugated jumper cable (constructed with solid copper conductors with soldered connections) produces the lowest level of PIM at any given test power. Some observations from Figure 1 are themore severe the defect, the higher the PIM for a given test power, the PIM level increases linearly on a dB scale with increasing test power and the rate of PIM level increase versus test power is different for each PIM source. One will also notice that as the test power changes over the range of 2 to 40 W, the magnitude of the PIM produced by each defect also changes. In theory, IM3 is expected to change 3 dB for every 1 dB change in test power and is expected to be linear over a wide range of test powers. In practice, this rate of change is typically lower and varies based on the physical characteristics of the defect causing the PIM. In the example, the “PIM slope” varies between 1.4 and 2.9 dB/dB for the components tested and, as expected, remains very consistent over the full range of powers tested. 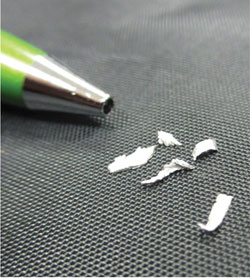 In order for the claim to be true that 40 W PIM testing will “spot problems that cannot be seen on a 20 W PIM tester,” either the test instrument does not have sufficient receiver sensitivity to yield a 10 dB signal to noise ratio for the PIM signal being measured or the PIM level increases in a nonlinear fashion (on a dB scale) as the test power level increases. High quality PIM test instruments manufactured today typically achieve a receiver noise floor level on the order of –130 dBm. Since the IM3 level that is required to measure is on the order of –150 dBc (–107 dBm) for factory tests and –140 dBc –97 dBm) for field tests, the typical signal-to-noise ratio achieved is between 23 and 33 dB. This means the PIM signal level is already 20 to 200 times stronger than the 10 dB minimum signal to noise ratio required for an accurate measurement. Increasing the test power does not create a useful benefit in measurement accuracy and may increase the personal safety risk to test personnel.

The data presented in this paper shows that IM3 increases linearly on a dB scale with increasing test power. This is true for the vast majority of defects found in RF components and in typical cell site installations. Similar results have been demonstrated across a wide range of test powers and test frequencies by other investigators.1,2

The Importance of Dynamic Testing

It is important to emphasize that all elements of a PIM test are important and must be used together to ensure the quality of the system under test. Accurately controlling the test power alone does not ensure a trouble free system, regardless of the test power level used.

To demonstrate the importance of dynamic testing, metal flakes (see Figure 2) were inserted inside an RF connection and the system was tested using the required 20 W power level. Without mechanical movement (static testing) the PIM performance appeared to be very good. When the connection was lightly tapped (dynamic testing) the PIM level jumped more than 50 dB clearly indicating that a problem exists (see Figure 3). 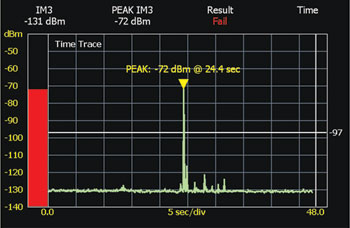 Dynamic testing identifies loose metal-to-metal connections as well as contact surface defects that might cause arcing at higher power levels. Without dynamic testing, these defects could go unnoticed until activated by wind loading, tower vibration or stresses caused by temperature changes.

Claims have been made by test equipment manufacturers that using 40 W of power rather than 20 W eliminates the need for dynamic testing. There is no single test power that by itself will sufficiently stress a system to identify defects. Applying mechanical stress while the PIM test is in process is the only way to ensure that the system is robust. If simply increasing the test power would have eliminated the need for dynamic testing, the IEC working group would not have spent the last 10 years fine tuning dynamic PIM test requirements for RF components such as jumper cable assemblies, RF connectors, filters and antennas. Details of this work can be found in the newly released versions of the IEC 62037 PIM test specification.

The existing PIM test standard was developed through a lengthy process of analysis, measurement and debate by a respected group of engineers, scientists and managers from the commercial telecommunications market: OEMs, component manufacturers and standards organizations. The test standard produced has been used globally for more than a decade. Component manufacturers, OEMs and network operators have built their quality procedures and performance requirements around measuring IM3 with 2 × 20 W test tones while applying dynamic stimulus. As shown by the example of the metal flakes inside a connector, dynamic stimulus is a critical component of the PIM testing process for identifying faults that are not visible under static conditions. There is no technical justification for changing the power level used for PIM tests to 40 W or any other power level (higher or lower). Nothing has changed since the specification was first released in 1999 to invalidate the IEC’s original, well considered recommendations.

NEC center for development of mobile communication systems in India