We use cookies to provide you with a better experience. By continuing to browse the site you are agreeing to our use of cookies in accordance with our Privacy Policy.
Home » Extremely Rugged UHF 600 W LDMOS Transistors 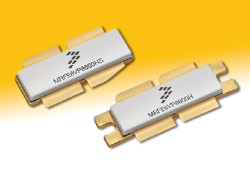 Recently, Freescale Semiconductor developed two new LDMOS power transistors that are setting new standards for ruggedness in the UHF broadcast transmitter industry and ISM applications. The MRFE6VP8600H and MRFE6VP8600HS are push-pull power transistors, which provide enhanced RF performance while operating over the entire 470 to 860 MHz UHF frequency band. When used in digital UHF TV applications (such as DVB-T), these devices will deliver highly linear, 125 W average signal output power at 30 percent efficiency. In addition, these two transistors are fully capable of sustained power output (CW) greater than 600 W (P1dB). More importantly, at full-rated output power the devices will not degrade in performance even while withstanding a nearly 100 percent mismatched load (greater than 65:1 VSWR) at all phase angles. This unmatched ruggedness specification holds true even when the transistors are over-driven at up to twice their rated input power, as can often be encountered with digital pre-distortion (DPD) systems. Finally, with over 19 dB of gain across the band, the MRFE6VP8600H and MRFE6VP8600HS provide a combination of excellent linear power amplification, high efficiency and ruggedness for the broadcast transmitter industry.

Taken together, the high output power and high gain capabilities of the MRFE6VP8600H will mean a reduction in the total number of splitters, transistors and combiner stages needed for a given output power level. This helps to simplify the transmitter design and improve reliability when compared to previous generation solid-state UHF amplifier systems. In Figure 1, a representative UHF amplifier consists of four MRFE6VP8600H transistors driven by a single MRF6VP3091NB amplifier, resulting in 450 W average DVB-T output power at a combined 26 percent power-added-efficiency (PAE) – including all five devices.

Each MRFE6VP8600H transistor by itself is capable of around 30 percent output power efficiency, so less overall current is required and less power is wasted as heat (for a given power output), translating directly into monthly utility cost savings for the UHF broadcaster. At 30 percent output-stage efficiency, a solid-state transmitter design based on the MRFE6VP8600H can use up to 15 percent less power than previous generations. When used in Doherty amplifier configurations, the overall output-stage efficiency can increase to approximately 45 percent, saving additional monthly utility costs. Still further PAE improvements are possible using amplifier drain modulation schemes (such as envelope tracking).

The MRFE6VP8600H includes an extended negative gate-source voltage range from −6 to +10 V. This unique feature allows improved Class C operation, such as when the device is used as the peaking stage of a Doherty amplifier. This feature can also be used to provide an easy way to safely, quickly and completely shut down the amplifier.

The broadband internal input matching circuit included within the MRFE6VP8600H reduces the external component count, simplifies circuit design and results in better power distribution across multi-stage amplifiers (see Figure 1). In addition, the enhanced ruggedness characteristics of the MRFE6VP8600H make it possible to design an amplifier with more simplified transmitter protection circuitry, even eliminating the need for isolators and/or circulators in many applications.

Given their enhanced ruggedness, the MRFE6VP8600H/HS devices can tolerate the out-of-band reflective load conditions caused by highly selective channel filters and the high peak-to-average (PAR) of the newest digital transmission schemes. This is especially true for higher-order modulation techniques such as the DVB-T and DVB-T2 standards. In addition, the enhanced ruggedness makes the MRFE6VP8600H/HS far more reliable under adverse conditions (such as operator error, transmission line failure, antenna icing), even with the higher drive peaks normally associated with today's pre-distortion systems. Table 1 summarizes the key features of these devices. 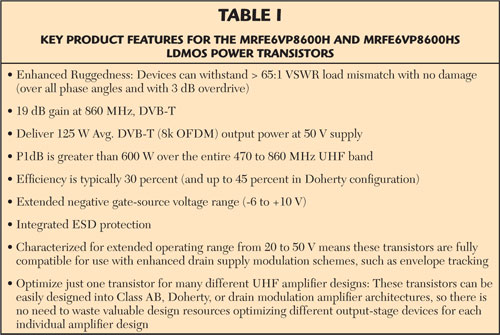 Typical applications for the MRFE6VP8600H/HS include all digital UHF television transmitters, translators and gap fillers employing DVB-T, DVB-T2, ATSC, or ISDB-T standard modulation schemes. The devices are also well-suited for use in analog UHF television transmitter designs. In addition, the MRFE6VP8600H and MRFE6VP8600HS can be used for many Industrial, Scientific and Medical (ISM) applications over the entire frequency range of 450 to 900 MHz.

Finally, these rugged LDMOS transistors have been designed and tested to provide high reliability, and either device is capable of providing an extended working life even in the most demanding environments. RF amplifier designers can choose either air-cavity ceramic package – the bolt-down NI-1230 or the solder-attach NI-1230S.