We use cookies to provide you with a better experience. By continuing to browse the site you are agreeing to our use of cookies in accordance with our Privacy Policy.
×
Home » Blogs » David Vye, MWJ Editor » Comparing Active and Passive Mixers with Besser Associates

David Vye
One Comment
In a recent webinar, one of the attendees commented that Besser Instructor Allen Podell was presenting results based on "rather wimpy performance assumptions" for his active mixer versus passive mixer comparison (see below) and suggested using newer active mixers such as ADL5801 or LT5557 from ADI or LTC? This attendee asserted that mixers based on these particular devices compete very well with the best passive mixers­. Allen took up this challenge and did a little investigation. His response is below. 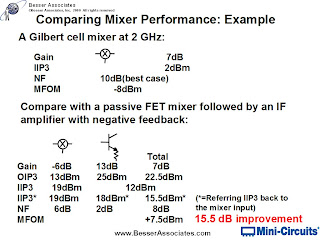 First of all, I must admit that it is true that the ADL5801 and the LT5557 mixers mentioned were quite comparable in performance to the combination of the passive mixer and IF amplifier given as an example. Let me point out that the power consumed by the amplifier in the example was about 10% of the example HDR mixers. My statement was that Gilbert Cell active mixers were inferior in dynamic range, based on their figure of merit. Even 10 of the Avago mixers would not have been as good as the course example, at a much high dc power consumption. Are the ADL and LT active HDR mixers truly Gilbert Cell mixers, as the Avago part is?

I tried to research the Analog Devices and Linear Technology recent patents to determine the design used in these mixers, but could not find an answer. Eliminating the common emitter amplifier stages and replacing them with a transformer would improve the performance of the active mixer, but it would no longer be a Gilbert Cell mixer. Had I used in my example a feedback IF amplifier running 80 mA and a Peregrine FET mixer together, we could have built an HDR mixer about 10 dB better than that of the example.

We could then re-start the mixer war.

To view the original webinar go to: http://www.mwjournal.com/WebinarBesser_May17