We use cookies to provide you with a better experience. By continuing to browse the site you are agreeing to our use of cookies in accordance with our Privacy Policy.
×
Home » Blogs » APITech Insights » Digitization of Satellite RF Systems

The APITech Insights blog from experts in the fields of EMI/EMC, EW, Space, RF/Microwave Hardware, Integrated Microwave Assembly, and other areas.

A traditional satellite communications payload consisted of the digital data and networking traffic being handled by external systems while the modem, transceiver, and RF Front-end (RFFE) handled analog communication signals from the digital controllers and the antenna system. Much of a satellite modem has long been replaced by digital hardware that processes the modulation and demodulation of communications signals at baseband frequency. Hence, more recent satellite communication systems use modems with Analog-to-digital Converters (ADCs) and Digital-to-analog Converters (DACs) that can operate to baseband frequencies, with the modulation, demodulation, and signal processing being handled in the digital plane by Application Specific Integrated Circuits (ASICs), General Purpose Processors (GPPs) or Field-programmable Gate Arrays (FPGAs). 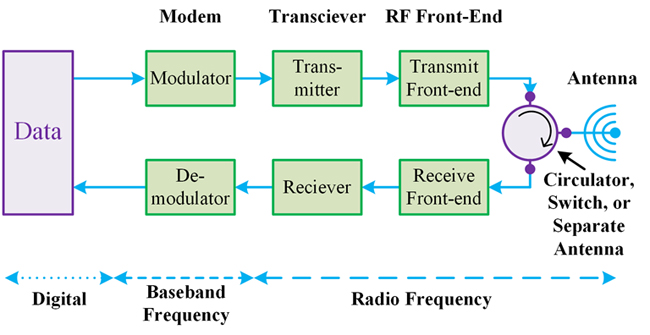 This led to the integration of digital hardware into the transmit and receive chain of satellite communications payload, but only to baseband frequencies. This left RFFE, Intermediate Frequency (IF), and baseband frequency (baseband) analog hardware remaining, even with the move from highly directional, discrete antenna to phased array antenna. This move merely required more RF, IF, and baseband hardware as well as digital controllers and amplitude/phase shifters in the RF section to handle the phase shifting for each antenna element or group.

Recent advances in direct digital synthesis, direct digital sampling, and digital upconversion/downconversion have led to increasing digitization of the satellite communication signal chain. An enabling factor for this digitization are higher frequency ADCs and DACs that can reach upper microwave and millimeter-wave frequencies and more powerful ASICs, GPPS, DPSs, and FPGAs that can handle the signal processing and data conversion requirements of modern satellite communications protocols have become available.

The result of the advancements in RF digitization is the replacement of the baseband and IF sections of the satellite communication signal chain, leaving only the RFFE and antenna system as analog. This digitization may also include the channelization hardware, and that process can now be done in the digital realm, no longer requiring analog multiplexers or digital switches. Namely, the low noise amplifiers, power amplifiers, circulators/switches, antenna, limiters, front-end filters, pre-amplifiers, and interconnect remain the only analog hardware in this chain for the latest satellites. With digitized modem and transceiver functions, the limiting performance factors for communications is now placed on the ADCs and DACs synthesizing and sampling the RF signals, as well as the RFFE presenting the most pristine signals to and from the antenna.

To further accommodate greater communication system flexibility, RF bandwidth has also increased. This means that wider bandwidth RF components and devices are now needed to pair with the wide bandwidth digital communications hardware. Moreover the new Digital Front-end (DFE) hardware presents its own new design challenges. For instance, the sample rate conversion (SRC) and channelization can have significant impact on the waveform with certain modulations requiring specific sampling rates. Moreover the DFE hardware also introduces its own distortions and noise, which must then be handled by the RF hardware to ensure high signal quality. These factors may result in additional filtering, such as antialiasing filters and channel selection filtering to reduce the burden of channelization on the digital hardware.

Satellite communication systems have now essentially become extremely high throughput software-defined radios (SDRs) coupled with Advanced Antenna Systems (AAS) that use new technologies to deliver the most flexible and highest performance communication link to as many consumers as possible. To meet these requirements a satellite communication payload that may have once consisted of a multitude of analog components, is now built with DACs, ADCS, FPGAs, ASICs, DSPs, and GPPs in highly integrated assemblies.