We use cookies to provide you with a better experience. By continuing to browse the site you are agreeing to our use of cookies in accordance with our Privacy Policy.
Home » Blogs » Gary Lerude, MWJ Technical Editor » Field Measurements Confirm 5G Is Working

In these early days of 5G, I find myself torn between two narratives.

First, the dream: 5G will revolutionize our lives in unimaginable ways, just as electricity erased the line between day and night and enabled so many technologies: radio, TV, integrated circuits, computers, the internet.

Or, the failure: mmWave propagation is limited and won’t provide continuous connections in real life. It won’t turn corners or get through windows and can’t provide rural coverage. Your hand will attenuate the signal so much that the already bad propagation will be unusable. The phone batteries won’t last and the phones will run hot.

I hope for the first case and fear the second. I’m heartened by the cheerleaders — Verizon, Ericsson, Qualcomm — yet early reports from the field seem disappointing, heightening my concern that the revenue growth plans of many companies will disappear like a mirage in the desert.

Signals Research Group, a consulting firm focused on the wireless industry, has been in the field testing the actual performance of 5G, based on measurements of networks in Korea, Switzerland, the U.K. and the U.S., operating at 3.5 and 28 GHz. The company released a report of its findings this week, and Michael Thelander, the founder and CEO, summarized the results in a webinar Wednesday afternoon.

Qualcomm reached out to us mid-summer and asked us to write a paper which highlights 5G network performance. One reason, we suspect, is that our testing and analysis provide credible information that we can back up with supporting data. Frequently, casual “testers,” such as media and bloggers, publish results and analysis from their experiences in a 5G network that misrepresents how the networks are really performing.

The data used for the report was limited to a few operators and locations; nonetheless, it provides a credible view of the early performance of the non-standalone 5G networks, i.e., where 5G provides the radio link and uses the operator’s existing LTE network. We can expect these results will improve as the networks are optimized, incorporating the industry’s experience with propagation, link performance, traffic and how to manage handoffs among the cells.

I’ll highlight a few conclusions from Thelander’s presentation which I found heartening. Given the complexity and nuances of how these 5G networks operate, I recommend you read the report. You can download it here.

Signals Research evaluated Verizon’s mmWave 5G network in downtown Minneapolis, right as the service was being launched in April. Verizon has 400 MHz bandwidth at 28 GHz. Using a Motorola Moto Z3 with the 5G module, Thelander and his team measured signal strength and quality (BSINR) to assess network quality and coverage, as they determine the achievable download speeds.

In these tests, the median download speed was around 380 Mbps, with peak rates approaching 1.5 Gbps.

In several cases, the tests confirmed the surprising propagation characteristics of mmWave signals, which they saw by mapping which cell sites attached to the phone as the phone moved along the test route. In one case,

“our smartphone connected to four different 5G radios during the one-block walk, even though we were walking toward a radio that was directly facing us.”

Turning and moving back down the same route, the phone attached to two radios more than a block away, one pointed away from the phone. The signal from the beam pointing away from the phone likely bounced off a nearby glass building or glass skybridge or both, and the reflection had sufficient strength for the phone to attach. This confirms what we’ve heard: multipath will aid mmWave coverage.

Recently, Signals Research evaluated Verizon’s indoor coverage at the US Bank stadium in Minneapolis. The mmWave radios are mounted near the ceiling, along a catwalk running the length of the field. Thelander said the coverage extended to “virtually all areas within the stadium” and achieved a physical layer throughput of almost 1.9 Gbps at a typical seat in the empty stadium.

“With two hands placed on the backside of the smartphone, there can be some minor degradation to performance. However, it takes two hands fully covering the smartphone and squeezing tightly to have a major impact — with considerable effort, it is possible for the smartphone to lose the 5G connection, at which point it reverts to LTE.”

Thelander notes the “death grip” also reduces LTE signal strength at the phone, although not as dramatically, since the frequency is lower.

No surprises with sub-6 GHz 5G

Signals Research ran tests on 5G networks in Seoul, London and Bern, all operating at 3.5 GHz.

Along a 4.6 km route in Seoul, an LG V50 5G phone achieved good coverage and 1.9x the download throughput of an LG G8 LTE phone, normalizing for resource blocks. The median 5G throughput was 512 Mbps, using 100 MHz bandwidth, compared to 268 Mbps for LTE.

In a walk test in Bern, covering an 8 km2 area, an OPPO Reno 5G smartphone had 1.5x faster downloads than an LTE-only phone, achieving a median download of 234 Mbps, compared to 156 Mbps for LTE.

None of these results is surprising, as we would expect higher data rates than LTE and good coverage, since the frequency band is not significantly higher than existing LTE bands. 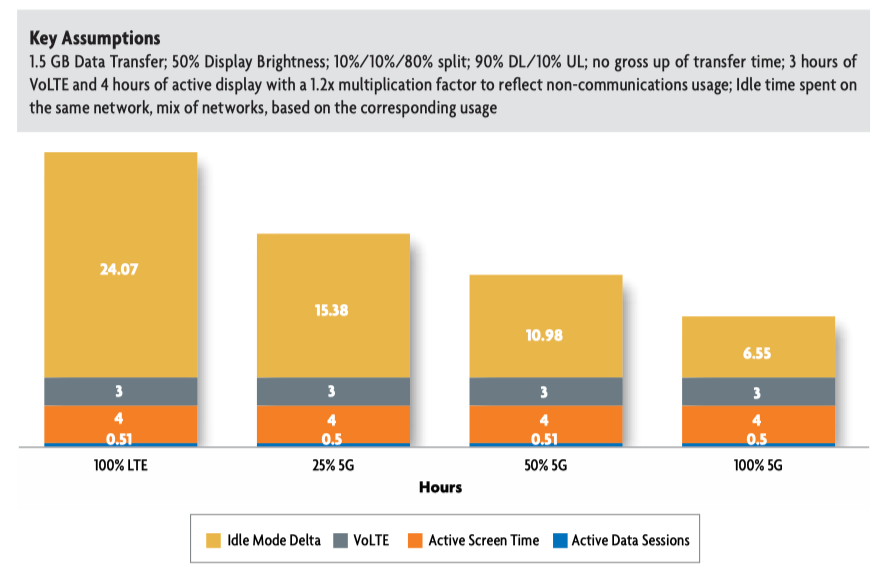 The glass is more than half full

The Signals Research data and report convey positive performance results for these initial deployments of 5G. We can expect performance to improve as operators fill in coverage gaps and optimize their networks, including the complex interactions between 5G and LTE.

I feel much better.