We use cookies to provide you with a better experience. By continuing to browse the site you are agreeing to our use of cookies in accordance with our Privacy Policy.
Home » Blogs » Gary Lerude, MWJ Technical Editor » MACOM’s New Management Team Outlines Path to Profitability

MACOM’s new management team, Steve Daly as CEO and Jack (John) Kober as CFO, held their first earnings call earlier this month and outlined their management philosophy and the path to improve MACOM’s profitability and grow the business.

Daly took the reins from John Croteau in mid-May, stepping into the leadership role from a seat on the board. Kober, who had been MACOM’s corporate controller since 2015, assumed the CFO role at the end of May. Daly said the two share a common philosophy about creating shareholder value.

Their first priority is to improve profitability by trimming costs across all areas of the company, which led to a 20 percent cut in staff — some 250 people — in mid-June. The restructuring aims to achieve $50 million savings per year.

To foster growth, Daly sees the need to streamline MACOM’s organization so “engineers are empowered to design products quickly and release them to the market efficiently.” Drawing from his experience as CEO of Hittite, known for its prolific product development process, Daly wants to improve MACOM’s process, saying growth will come from “compelling” products.

However, Daly affirmed MACOM has targeted the “right” markets and has the “right” technologies to support them. He outlined MACOM’s product-technology portfolio, which he classified as mature and emerging:

Responding to a question from an analyst, Daly elaborated on his view of MACOM’s strategy to develop GaN on Si technology for base station infrastructure, a major bet made by his predecessor. Daly said MACOM is targeting the massive MIMO architecture, which will consume “tens of millions” of power amplifiers. He said GaN on Si “fits very nicely between LDMOS and GaN on SiC” and has a cost advantage if produced on a high volume silicon fab.

In February 2018, MACOM announced a manufacturing relationship with ST Microeletcronics, and the two companies have been developing an RF GaN on Si process compatible with ST’s CMOS technology. Daly said he is encouraged by “working prototypes in the lab,” although he cautioned there’s “still a lot of work to do.” He did not estimate the timing for completing process development and qualification; however, he seems committed to the development after thoroughly reviewing the program.

“We are certainly excited about the opportunity and it is very large,” he said. Listen to his full remarks:

A subsequent question from another analyst asked if MACOM might miss the market window, given the uncertain timeline for qualifying the GaN on Si process. Daly responded

”We may miss some of it, but we certainly recognize that it's a big opportunity, it's a multi-year opportunity. And when we're ready to enter the market with our partners, we believe we’ll be successful.”

Daly identified data centers as another growth opportunity. MACOM first pivoted toward optical networking in 2011, with the acquisition of Optomai, a fabless IC company focused on the microwave/optical interface for the highest data rate long haul and metro networks.

MACOM subsequently made a series of acquisitions, including Mindspeed, Applied Micro Circuits, BinOptics and FiBest, which expanded the portfolio of optical networking and silicon photonics IC technology and positioned the company to play in the emerging, high volume data center market.

In the second fiscal quarter of fiscal 2017 (ending March 2017), the optical markets contributed some 64 percent of total revenue. That was the high water mark, as optical revenue suffered a nine quarter decline — with weakness in China a major contributor — and hasn’t recovered. The projected growth in data centers hasn’t materialized; after several flat quarters, revenue declined the past two quarters. 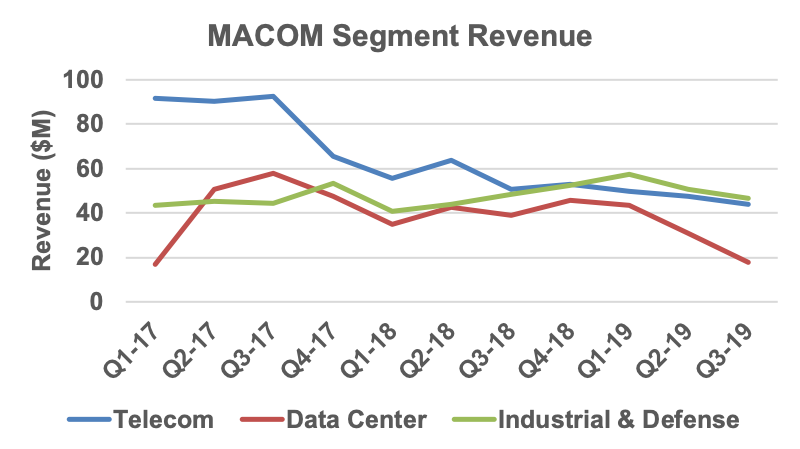 For the third fiscal quarter (Q3), MACOM reported $108 million in GAAP revenue, which was down 16 percent from the prior quarter and 21 percent below the prior year’s quarter. 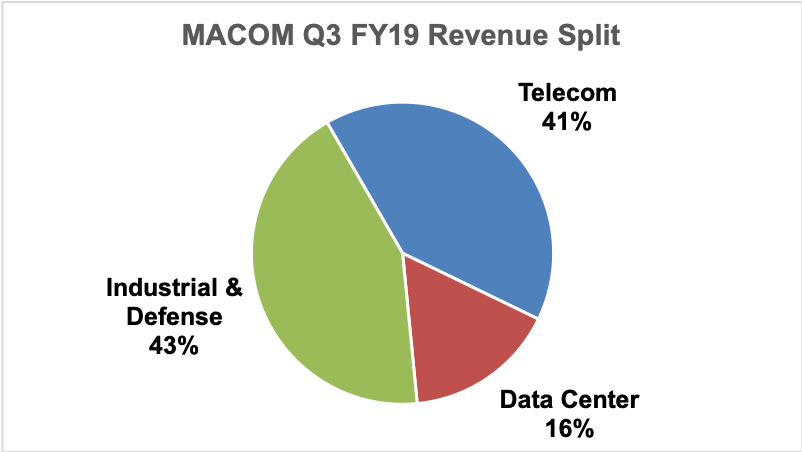 Fiscal Q4 revenue is expected to range from $108 million to $112 million. The midpoint of $110 million represents 2 percent sequential growth and a decline of 27 percent Y/Y. Daly said the data center and industrial and defense revenues in Q4 are expected to be “up slightly,” with telecom “flat to down slightly.”

It seems the strategic direction set during John Croteau’s tenure remains intact: the aggressive pursuit of optical applications and developing GaN on Si, a “blue ocean” strategy to enter the base station infrastructure power market.

When I wrote about the restructuring plan implemented by Daly within a month of his appointment as CEO, I said

In the great game of business, a company succeeds when it has a clear vision, the guts to bet on that vision and the execution to make it happen. I admired John Croteau for articulating a vision for a born-again MACOM after the Tyco years, with the guts to pursue it. It now looks like his vision was overly ambitious, without the execution to validate it. MACOM was too far out over its skis.

Croteau disagreed with my statement that MACOM failed to execute. He attributed MACOM’s challenge to market weakness, particularly in China. MACOM’s optical and base station strategies are heavily invested in China and Huawei. According to Croteau, weak optical demand, the ban on exporting products to Huawei and the overall trade war with China torpedoed MACOM’s ability to deliver the near-term revenue needed to cover costs and reduce debt. Croteau argued that’s a market issue, not poor execution.

Responding to this shift in global winds, Daly has trimmed the sails, but the direction seems to be the same. Perhaps that will give Croteau some satisfaction about his legacy. Closing the earnings call, Daly said “The success of MACOM going forward will be focusing on all the little details.”

Macom is headed for a hard fall. Steve...

Maybe you can get Steve on for an...

Gary - That is a really interesting question!...