We use cookies to provide you with a better experience. By continuing to browse the site you are agreeing to our use of cookies in accordance with our Privacy Policy.
Home » Blogs » Gary Lerude, MWJ Technical Editor » A Radar in Every Home — Maybe Two or Three

A Radar in Every Home — Maybe Two or Three 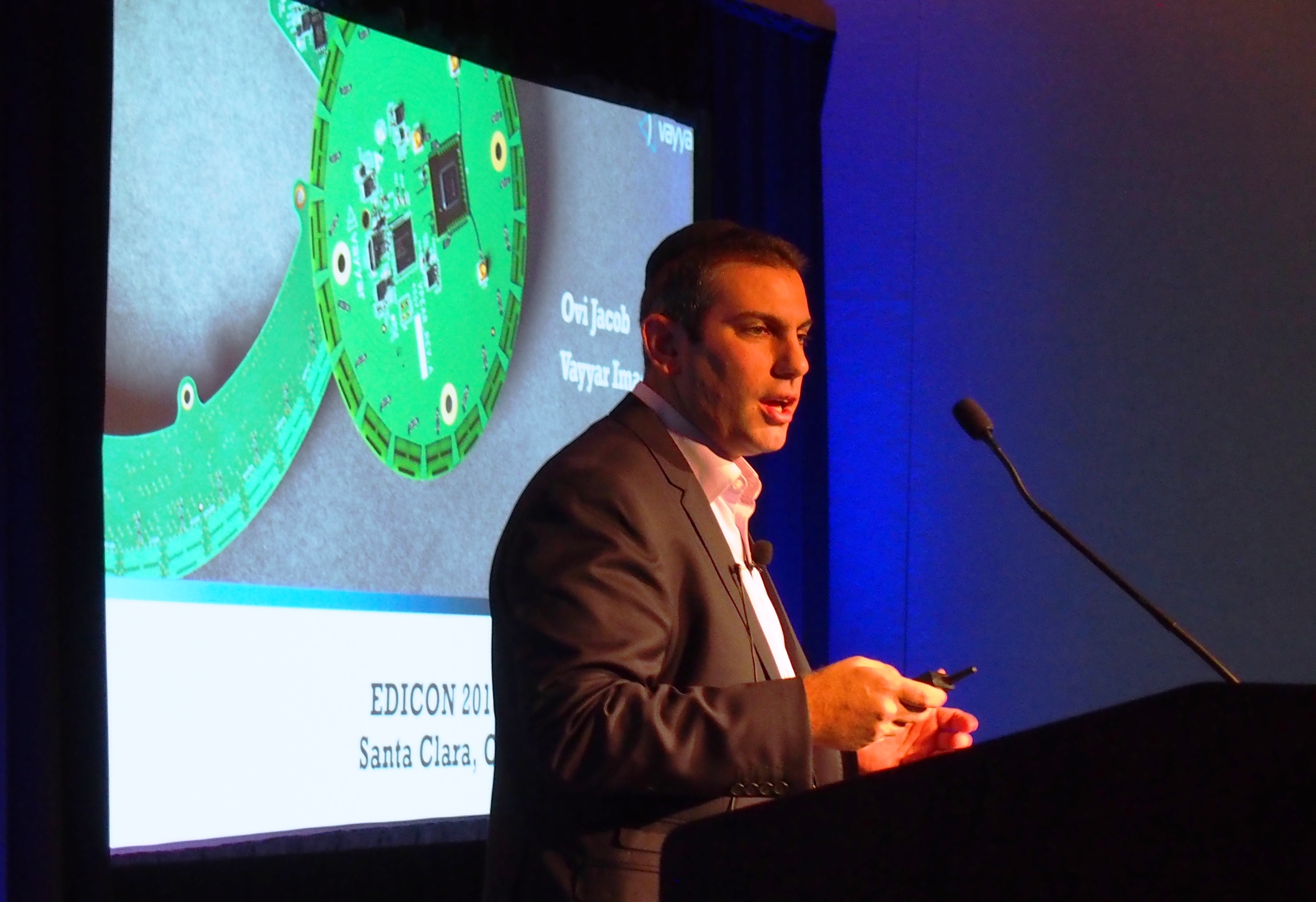 Vayyar Imaging was formed in 2008 with the vision to create a means for detecting breast tumors without using ionizing radiation (i.e., X-rays). Believing radar is a viable alternative, Vayyar developed an UWB radar IC (the VYYR2401-A3) with an upper frequency range of 20 GHz that integrates some 19 transmit and receive channels on-chip, each channel connected to a patch antenna on a printed circuit board (PCB). Concatenating multiple ICs — the latest imaging system prototype uses 20 ICs connected to 190 patch antennas, embedded in a heavy plastic bra — enables the system to create a high resolution 3D image. Digital signal processing converts the multiple return signals into an image of breast tissue within 60 seconds.

While accuracy and patient safety are the primary goals, Vayyar’s 3D imaging system offers a significant cost advantage. The typical X-ray mammography system costs between $200,000 and $400,000, compared to the projected cost of less than $5,000 for Vayyar’s radar imaging.

The Vayyar system has been tested in two hospitals in Israel, and the company is planning a commercial launch in India next year.

Vayyar found that two radar probes in the ground, spaced approximately 1 meter apart, can measure the density of the water in the ground. The information enables irrigation to be timed — even tailored to the growth cycle of specific crops. Jacob cited a potato as an example, which has eight stages of growth until it is ready to be harvested. UWB sensors can provide the data to correlate water levels with potato size, taste and yields.

The radar reflection from milk flowing through a plastic tube contains the fat, protein and lactose content, if you have the right algorithm to extract the data. With that information, milk producers can monitor the quality of the milk received from dairy farms — even blending the milk from various farms to achieve the desired characteristics and ensure uniformity.

Probably most children worry about their elderly parents living alone, fearing a fall that could render the parent unable to summon help. Emergency pendants worn around the neck aren’t always worn, particularly in the shower or bed, where falls are most likely to occur. A camera in the home is intrusive, infringing on privacy. So Vayyar applied the UWB radar to this problem, developing a system called Walabot HOME, which is planned to be released in time for holiday shopping. With Walabot HOME, a radar sensor mounted on the wall creates a real-time map of the room, with sufficient resolution to identify the people, their locations, postures and breathing rhythms. If the system detects a sudden change in posture, which could be a fall, it “pings” the occupants, asking for confirmation that all is normal. If there’s no response, the system calls an emergency contact programmed into the software.

Previously, Vayyer released a product using the same UWB sensor, called the Walabot DIY. It uses a single IC connected to 18 antennas on a PCB and interfaces with an Android phone app. The sensor can be used to scan a wall, identifying objects behind the wall: studs, pipes, wires — even moving rodents. Vayyar has sold more than 150,000 of the the Walabot DIY sensors during the past two years.

To encourage new applications of UWB radar, Vayyar offers several developer kits. The Walabot Developer includes a 3D sensor board with the VYYR2401-A3 IC and 18 antennas, configured for either the U.S. or European UWB bands (3.3 to 10.3 GHz or 6.3 to 8 GHz, respectively). The user connects the sensor board to a processor and codes the application in Python or Matlab. To shorten the development complexity and time, Vayyar provides a library of imaging algorithms with the kit. Walabot Developer can create 2D and 3D imaging, with the capability for short-range imaging to detect objects and measure breathing.

Lower cost versions of the Walabot developer kits are available, having fewer antennas and capabilities.

Vayyar is developing a second-generation IC, one supporting more than 40 antennas and two additional frequency bands: 24 GHz and 57 to 67 GHz. This UWB radar will be able to perform high resolution 3D imaging and capable of tracking and counting people and detecting gestures.

Radar in Every Home

Radar is a relatively “new” technology — less than 100 years since it was first applied by the military during World War II. Initial commercial uses were applications tolerant of the high cost, such as weather and airport surveillance radar. Automotive radar became the first application to harness Moore’s Law to lower cost and achieve high production volume.

Radar is no longer an esoteric, expensive technology. Vayyar Imaging and a handful of other companies are applying the theory of radio detection and ranging to myriad commercial applications, from the field to the farm to our homes. In the coming years, radar may become as ubiquitous as Wi-Fi and mobile phones.

Walabot and Alexa team up to handle one of parenting's most tedious chores: getting the kids up for school.