We use cookies to provide you with a better experience. By continuing to browse the site you are agreeing to our use of cookies in accordance with our Privacy Policy.
×
Stay Connected :
Home » Blogs » Richard Mumford, MWJ International Editor » Security & Counter Terror Expo 2017 – the future is secure

Security & Counter Terror Expo, which was held at Olympia, London on 3 to 4 May 2017 covered the entire spectrum of products, systems, services and technologies being developed and implemented to increase security and identify and repel threats. You would think that with exhibitors offering such diversity as: perimeter security, IED identification, armour, surveillance systems and even the provision of ‘holistic security management solutions’ it would have taken the use of the Specialist Explosive Detection Dog Teams at the event to find the handful of exhibitors relevant to the RF and microwave industry. 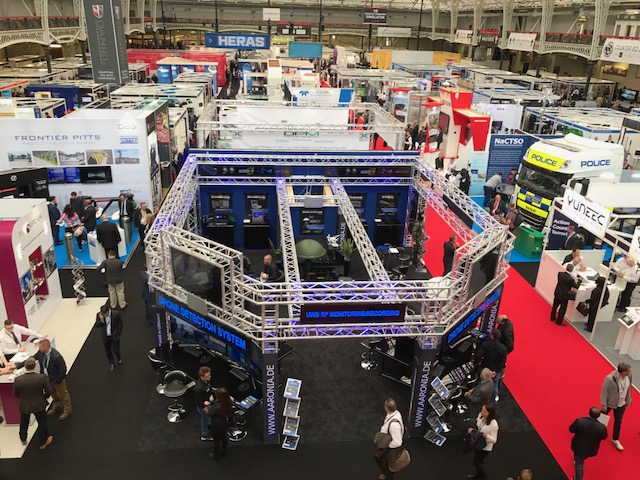 However, that was definitely not the case for Aaronia whose distinctive booth set-up – so familiar to visitors to EuMW and other shows – was very visible at the entrance to the exhibition hall.  Although a number of the company’s latest products were featured the focus for this event was the Drone Detector, a product that exploits the RF radiation emitted by the UAV’s onboard systems and by the operator’s control unit. Two types of 3D direction-finding antenna are offered – the IsoLOG 3D 80-UWB and IsoLOG 3D 160-UWB. Both cover from 9 kHz to 6 GHz, and extenders are available should VLF (below 9 kHz) and 6-20 GHz coverage be required. The Drone Detector has a real-time bandwidth of 80 MHz.Optionally, which can be extended to 175 MHz. Aaronia also previewed the brand new Manpack Drone Detector system, which is as it sounds – a portable version carried in a backpack. 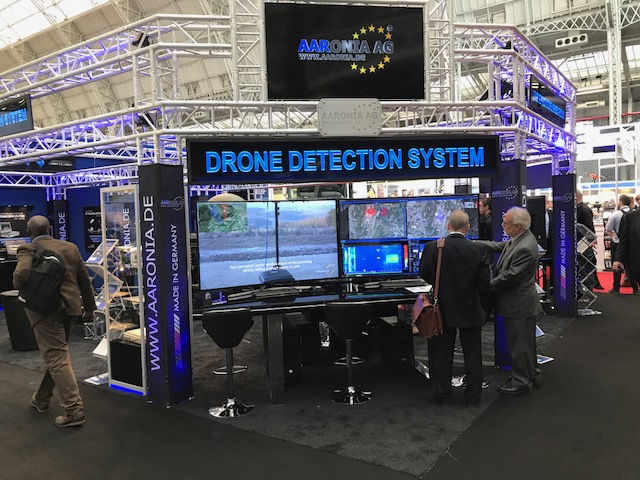 Done detection at the Aaronia booth

Drones or Unmanned Aerial Vehicles (UAVs) were also at the forefront of Keysight Technology’s booth where the company demonstrated its capability for the RF testing of such systems. Also highlighted was the Firefox handheld analyzers with real-time spectrum analysis (RTSA) up to 50 GHz. FieldFox RTSA software, Option 350, is designed for engineers and technicians performing interference hunting and signal monitoring in surveillance and secure communications, radar, electronic warfare and commercial wireless applications. RTSA can capture burst signals in real-time, making them significantly easier to detect.

As well as detecting threats they also need to be stopped. So, Teledyne e2v showcased the RF Safe-StopTM, the engine deactivation technology that is capable of bringing moving targets across land, sea and air to a controlled stop at a safe distance without collateral damage. The state-of-the-art non-contact engine jamming system uses RF power to direct narrow band engine stopping capabilities. RF Safe-Stop is offered as a ‘full’ or ‘lite’ system. The latter being designed for lightweight patrol boat applications, with the total system weighing less than 175 kg and delivering an average stopping range in excess of 50 m. 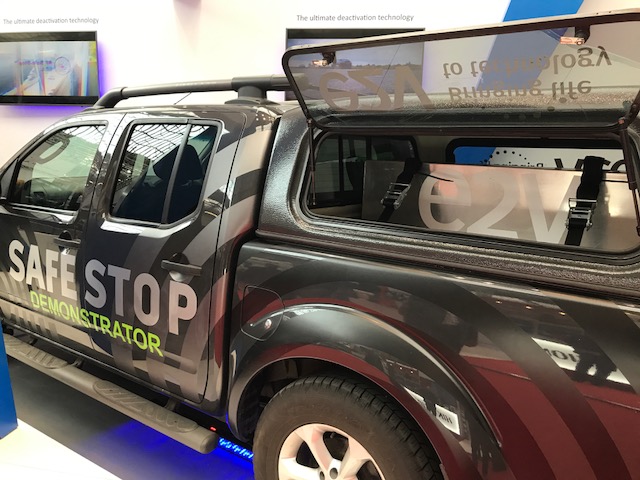 Similarly, K9 Electronics Ltd designs and manufactures a wide range of RF jamming equipment and devices, both for cellular communications and drones.

Special Features at the event included Advanced Technologies Live, which offered the opportunity to see and hear more about the latest technologies and innovative solutions that the industry has to offer through a series of live demonstrations. In particular it offered SME’s  the chance to present their solutions and raise their profile on a broad international platform.

The Counter IED Zone showcased best practice in reducing the threat of IEDs. Combining live demonstrations of new technology with the latest strategies, it was a critical learning platform for EOD, CIED, CBRNe, Defence, Law Enforcement, CT and Security professionals.

Just as those exhibiting covered the entire security and counter terror spectrum so too did the World Counter Terror Congress where over 300 internationally recognised experts gathered to: debate the threats being faced, define operational strategies and help shape future policy.