Rosenberger has extended its HVR® range of high-voltage connectors has, which means it now covers current loads from 50 A up to 450 A.

Rosenberger has introduced the High-Speed FAKRA-Mini HFM® automotive coaxial connector series for applications up to 15 GHz and with data rates up to 20 Gbps.

Rosenberger has launched what it claims to be the next generation of automotive coax connectors for high data transmissions up to 15 GHz/20 Gbps. 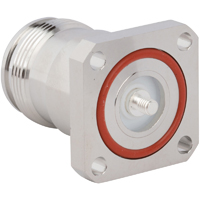 Amphenol RF is pleased to offer a full range of 4.3-10 connectors and adapters, which are engineered for the wireless market and are ideal for applications requiring low passive intermodulation or PIM.

Fairview Microwave Inc., a supplier of on-demand microwave and RF components, introduces a new family of flexible 50 and 67 GHz VNA test cables. These highly durable assemblies are designed for use as VNA test port extenders and are able to withstand the rigors of the test lab where these cables are constantly flexed and torqued during normal testing situations.