We use cookies to provide you with a better experience. By continuing to browse the site you are agreeing to our use of cookies in accordance with our Privacy Policy.
×
Home » LTE-M – Delivering a Futureproof IoT
IoT/M2M/V2V Channel The CAT-1 LTE modem was initially defined in 2008 as a low-cost, low-power alternative to connect IoT devices that needed to transfer limited amounts of data. However, vendors and network providers at that time focused on higher throughput; the actual device introduction started about five or six years later.

In 2016, eight years after the initial CAT-1 definition, CAT-1bis was finalized in 3GPP Release 13. The protocol was expected to further reduce the cost of the modem and simplify the device by removing the second antenna. Those technologies were far better suited for the IoT than 4G/LTE (CAT3 and above), which were designed for smartphones and other demanding devices, and whose high cost and power consumption needs were far beyond the requirements of a connected utility meter, tracker devices, medical health devices and other applications.

At about the same time, in 2016, the specs for LTE-M (CAT-M) were frozen and released by 3GPP. Device makers and chipset designers have debated which is better. Staring into the future, it is clear that LTE-M’s futureproof technology, better coverage and lower power costs should make it the cellular modem of choice for the IoT.

CAT-1 has several key benefits over LTE-M. It offers higher maximal throughput, which may be needed for some applications, and lower power consumption when uploading or downloading significant amounts of data (faster transmission, shorter on time), as well as slightly lower latency. However, the majority of IoT devices rarely need high throughput or capacity as they are inherently designed to operate at low data rates. Therefore, those advantages do not offer a compelling use case for smart cities and utilities.

Being Part of the 5G Framework Matters

Utility device designers and smart-city planners want to create connected devices that will share data for the next 10 to 15 years. LTE-M was included in the 5G framework. As a result, its technology is expected to be supported until 2040 and beyond. Smart meters and other critical infrastructure applications will continue to pump out information deep into the foreseeable 5G future.

Absolutely all flagship smartphones have supported 5G features for about two years, and 5G is becoming a standard feature for any smartphone. For carriers, smartphone connectivity is a major business, and it drives many of the spectrum management decisions. Since all smartphones (and new vehicles) are 5G capable, cellular carriers around the world have already begun their spectrum re-farming from LTE to 5G. As 5G devices become commoditized, carriers will have financial pressure to migrate their spectrum to 5G. In contrast to LTE-M, CAT-1, which is supported by the LTE network only, could find itself completely unsupported as soon as 2030. Once that support is gone, devices with CAT-1 will be unable to transmit data and will need to be replaced.

For the better part of 10 years, we have seen telecom carriers and industry insiders offer their vision of 5G. The vision is coming to fruition across the planet, enhancing IoT and bringing more smart cities closer to reality. It is ironic that we may see CAT-1 holdouts cling to LTE technology. With LTE’s lack of support coming in as little as eight years, no one can guarantee its longevity.

This alone should be enough to drive developers to LTE-M. However, LTE-M has additional factors in its favor.

In CE Mode A, we have seen a 5 dB improvement for LTE-M over CAT-1. CAT-1's dual antenna seemingly would give it an advantage over LTE-M's single antenna.

As shown in the graphic below, CAT-1 and CAT-1bis transfer more bits per second in good conditions. However, as conditions deteriorate and coupling loss increases, CAT-1's bit rate drops and becomes closer to LTE-M. CAT-1bis completely disconnects at around 145 dB MCL (minimum coupling loss), and CAT-1 loses its connection at about 149 dB. LTE-M, on the other hand, is able to maintain its connection down to 154 dB CL.

In effect, LTE-M is a more robust solution, able to maintain connectivity even after CAT-1 has dropped offline. 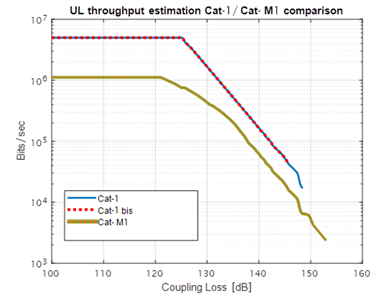 LTE-M’s extended coverage in poor conditions and poor coverage areas is especially important for critical infrastructure applications, as devices frequently need to be installed in challenging reception environments like basements. System integrators also must consider that coverage could degrade over time due to vegetation growth or changes in our cities’ landscape due to continuous housing development.

Across the board, the costs associated with LTE-M are significantly lower than both CAT-1 and CAT-1bis. Using LTE-M as our baseline, CAT-1bis is 20 to 50 percent more expensive and CAT-1 is up to 80 percent more expensive. LTE-M uses less hardware in its design. Its simpler design has fewer parts, including just a single antenna and no need for expensive, country-specific SAW filters – enabling ONESKU™ solutions. This is one of the examples where economy of scale helps to reduce the cost and simplify the logistics.

LTE-M’s operational costs are also lower than that of its rival technologies. LTE-M is far better than CAT-1 and CAT-1bis at conserving power. Its reduced power consumption not only extends battery life but costs less to operate due to the smaller number of batteries.

Look to the Future

IoT utility devices are built to last for the long term. As such, LTE-M is the right technology choice. Admittedly, LTE-M does not have the same throughput as CAT-1 offers. With a 5 Mbps upload and 10 Mbps download, CAT-1 can move data faster than LTE-M’s 1.2 Mbps upload and download speed (3GPP Release 17). However, connected utilities typically do not need the higher throughput provided by CAT-1. They can transfer data just as effectively over LTE-M.

The two technologies have comparable network capacity as well, although, in practice, LTE-M only deploys 6RB, which could lead to reduced network capacity to match the current demand. This is sufficient for a connected utility use case and helps reduce operating expenses for the carriers. LTE-M offers better latency in poor coverage areas, which is important considering that many utility meters are located in rural areas with the weaker network coverage.

Considering that LTE-M is included in the 5G framework and will last until at least 2040, has lower costs and meets the requirements of smart utilities, it is the obvious choice for utility and smart-city developers.