We use cookies to provide you with a better experience. By continuing to browse the site you are agreeing to our use of cookies in accordance with our Privacy Policy.
×
Home » EM-bridge Technology and Applications

In 1880, Oliver Heaviside was granted a patent1 in which he wrote: “My improvements have for objective to obtain perfect protection, and to render a circuit completely independent under all circumstances of external inductive influence. For this purpose, I use two insulated conductors for the circuit, and place one of them inside the other; thus, one conductor may be a wire, and the other a tube or sheath...” Heaviside’s invention paved the way for the manufacture of a trillion miles of coaxial cable to carry countless messages and huge volumes of data. Heaviside also re-wrote Maxwell’s equations and introduced the terms for conductance, impedance and inductance, with which all microwave engineers are familiar. 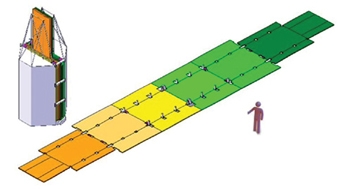 More than 132 years after Heaviside’s invention, coaxial cables continue performing great work, but there are issues when using them in deployable direct radiating array (DRA) antennas on satellites. Figure 1 shows an example of a large stepped-aperture DRA antenna2-4 in the stowed and deployed states.

RF harnesses, comprising many long coaxial cables, are typically used in a beamforming network (BFN) to make signal path connections between transmit/receive (Tx/Rx) modules located in a central region of the satellite and the subarrays of radiating elements, which are located on deployable panels. When the antenna area exceeds 70 m2, the total length of coaxial cable can exceed 1 km, and the attenuation in a coaxial cable BFN can be greater than 3 dB. Such high attenuation impacts the space mission through greater demands on the payload transmitter, power conditioning, batteries and solar panel subsystems.

Attenuation and mechanical flexibility of coaxial cables are mutually exclusive properties. To minimize attenuation due to conductor loss, the diameters of the inner and outer conductors must be increased, which rapidly raises the resistive bending torque and the mass of the cable.

Nonlinearities at the metal-to-metal contacts in the coaxial connectors and in the braid along the lengths of the coaxial cable, which feed the antenna subarrays, can cause severe passive intermodulation (PIM) issues.5,6 PIM interference has a serious impact on the performance of high-power multi-frequency telecommunication systems, especially when the antenna is shared simultaneously by the transmitter and the receiver. Special coaxial connectors and assembly procedures are required to minimize PIM, which often prolongs final system testing and the delivery of space payloads.

The authors have invented and patented7 a means of bridging the gaps at the inter-panel junctions of deployable antennas that eliminates coaxial cables and their related issues from the BFN.

Figure 2 illustrates one example, in which folded sections of microstrip transmission line, each comprising a trace (1) and a ground plane (2) are separated by a dielectric substrate (3) in the normal manner. A flexible trace (4) and a flexible ground plane (5) are contained within their respective flexible dielectric bridges (6 and 7), which, in this folded (stowed) state, are in an arched form at the inter-panel junctions. A dielectric cover (8) keeps the flexible conductors close to their respective conductors in the microstrip. 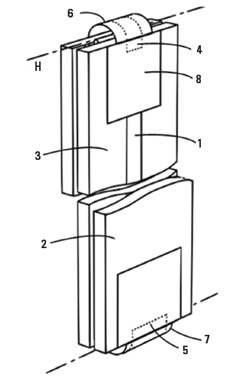 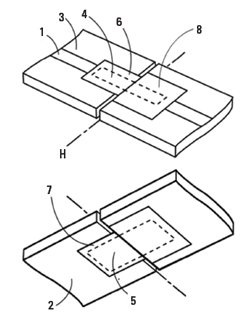 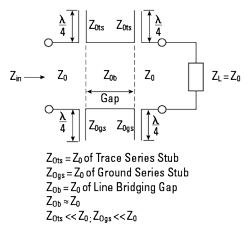 During the deployment phase, the flexible parts unfold and slide over their respective traces and ground planes until the deployed state is reached (see Figure 3). In this deployed state, the flexible trace, which is separated from each of the microstrip traces by the dielectric, forms two series-branching, low impedance parallel-plate transmission lines, which are nominally a quarter-wavelength long at the operating frequency.