We use cookies to provide you with a better experience. By continuing to browse the site you are agreeing to our use of cookies in accordance with our Privacy Policy.
×
Home » An Enabling Future: The Evolution of GaN for Higher Performance Microwave and mmWave Systems

An Enabling Future: The Evolution of GaN for Higher Performance Microwave and mmWave Systems 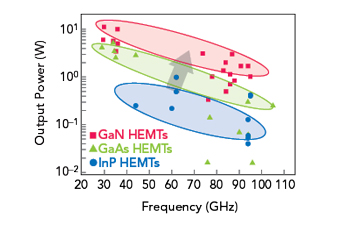 In the late 2000s and throughout the 2010s, GaN III/V semiconductor technology was touted as a game-changing technology for RF and power applications. Though GaN technology has yielded impressive power and broadband amplifier solutions (see Figure 1), there have also been many challenges in designing, manufacturing and implementing GaN devices that live up to the hype. Process advancements and R&D efforts continue to whittle away at these challenges and further explore the limits of the technology. These include incredibly wideband amplification, GaN devices operating to hundreds of GHz, new GaN transistors—even GaN-CMOS processes.2–8

This article aims to update readers on the state of GaN RF technology, emerging GaN technology/applications and factors enabling the advancement and use of GaN for RF, microwave and mmWave applications.

When speaking of GaN devices, the variety of different material and process variants, as well as technology variants, lead to devices better suited for certain applications. In general, when discussing GaN for RF, microwave and mmWave applications, the focus is on GaN HEMTs. However, recent research is seeking to integrate GaN transistors with other processes, such as GaAs and CMOS. 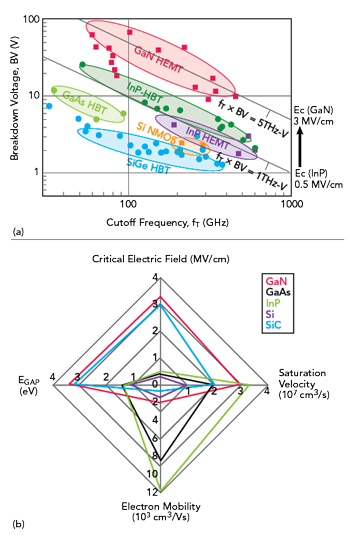 GaN transistors generally yield better PA characteristics than Si, SiC, InP, SiGe and GaAs devices (see Figure 2). The main reasons are GaN’s higher breakdown voltage and higher power-added-efficiency (PAE) at a higher power than Si or GaAs devices. GaN on SiC outperforms GaN on Si, although GaN on Si devices tend to cost less per device than GaN on SiC devices operating in the same frequency range. Higher epitaxial defects and lower thermal conductivity of the Si substrate are the main reasons why GaN on Si is generally inferior to GaN on SiC for PAs. Another beneficial aspect is GaN’s wide operating temperature range, beyond that of SiC, making it suitable for aerospace, defense and space applications.9 GaN HEMTs also exhibit higher mechanical robustness than other class III/V semiconductors.

These capabilities led to GaN PAs with extremely high-power densities and good PAE, even to mmWave frequencies. The ruggedness and operating temperature capabilities enable GaN HEMTs to be used in virtually any application where its costs support system goals.

Though previously considered a niche application in defense and aerospace systems, high survivability low noise amplifiers (LNAs) are gaining interest in applications that need to handle high-power interference signals. GaAs and InP LNAs typically have a limited maximum signal input before becoming desensitized or being damaged. To protect sensitive LNAs, limiters and other protection, such as variable attenuators, have been used at the input to the LNAs to protect them. However, these protective devices including ESD protection, add insertion loss and degrade the noise figure, limiting the sensitivity of the receiver. Because GaN transistors have a much higher breakdown voltage and power handling before damage, a GaN LNA may eliminate the need for a limiter or other front-end protection circuitry. Though current GaN LNAs may not have a noise figure as low as GaAs LNAs, eliminating the loss of the receiver protection circuitry may yield close to the same system noise figure.

GaN FETs and PIN diodes are now being used as switching elements. The latest GaN switches have relatively low on resistance and off-state capacitance, and GaN switches benefit from the high breakdown voltage, which enables the switch to have much higher power handling than GaAs switches—tens of watts compared to a few watts or less.

GaN switches may reduce the complexity of the signal chain and greater system efficiency. As GaN operates at much higher temperatures than GaAs or InP, GaN switches may be suitable for applications with higher ambient temperature or greater power levels than other III-V semiconductor options.

The dynamic network performance of 5G and future 6G systems presents challenges for RF hardware designers attempting to achieve the highest output power and efficiency. 5G and 6G systems will push operating frequencies to higher mmWave and sub-THz bands with wide modulation bandwidths to reach the desired data rates. System complexity will increase dramatically with the adoption of MIMO and beamforming antennas that require a matrix of transceivers to achieve the power levels for acceptable link ranges and multiple simultaneous users. In many cases, these complex base stations, each with an array of antennas and transceivers, will operate in harsh environments, whether outdoors, industrial settings or aerospace and defense systems—all requiring compact, rugged hardware.

This is where GaN HEMTs offer promising advantages. For the same output power, GaN PAs enable fewer elements in the array than GaAs PAs. As GaN HEMTs can operate at higher temperatures more efficiently than GaAs, a comparable—even higher performance—active antenna system can be built with GaN than GaAs, yielding a smaller system for possibly lower cost.

GaN technologies have been in development for several decades, with early GaN HEMTs available commercially for nearly a decade. Commercialization has enabled GaN to make inroads into a variety of applications, which has sparked interest in using GaN for higher frequency and more challenging performance applications. Technology developments have turned to integrating GaN devices in modules with other semiconductors, such as CMOS-compatible GaN processes.