We use cookies to provide you with a better experience. By continuing to browse the site you are agreeing to our use of cookies in accordance with our Privacy Policy.
×
Stay Connected :
Home » A Sub-THz Test Bed to Evaluate Potential 6G Waveforms
6G/Advanced Cellular Sub-THz frequency bands are the focus of early research on 6G. Achieving high throughput performance in sub-THz (100 to 300 GHz) or THz (300 GHz to 3 THz) spectrum involves extreme modulation bandwidths. Researchers require a flexible and scalable test bed to gain insight into the performance of their evolving 6G designs. Keysight has developed a test bed for the D- (110 to 170 GHz) and G-Bands (140 to 220 GHz) to measure error vector magnitude (EVM)¹. Combining high performance multichannel equipment and hardware with flexible signal generation and analysis software, the system supports modulation bandwidths up to 10 GHz, providing the capability to evaluate candidate waveforms for 6G.

Evaluating potential waveforms and frame structures for high data throughput in low SNR environments will be an important area of research for 6G. The sub-THz test bed discussed in this article provides flexibility for evaluating candidate waveforms and frame structures using a flexible vector signal analyzer (VSA) capability. Wide bandwidth waveforms can be evaluated for robustness using pilots and preambles for improved synchronization and channel estimation with low SNR waveforms. A case study using this VSA capability with the sub-THz test bed is described, showing low residual EVM for a 256-QAM waveform using approximately 10 GHz of occupied bandwidth at 144 GHz.

Potential 6G waveforms and candidate frame structures need to be evaluated for high data throughput and robustness to low SNR. The data payload portion of the frame structure will likely use higher-order modulation, such as 64-QAM, to increase the number of bits per symbol to achieve high data throughput. However, to achieve robust performance to noise, the frame structures may use preambles, pilot-aided synchronization and channel estimation. The preambles typically use low order modulation such as binary phase-shift keying (BPSK), which is more robust to noise in the wireless channel. Allocations specifically used for synchronization can be designed to have good correlation, which also increases robustness in low SNR scenarios.

To provide 6G system designers maximum flexibility when designing and evaluating candidate waveform, the VSA in a test bed should provide many options for waveforms and frame structures. Keysight’s VSA software has a frame definition panel that enables analyzing both periodic and burst type signals (see Figure 1). If the signal is burst, the automatic mode detects the frame boundaries. The user can also design and specify each part of the frame allocation, adding them in Frame Parts and specifying the configuration and location in the frame. If an allocation is repeated within the frame, a repetition structure can be defined as a repeat pattern. An allocation summary provides an overview for each allocation in the frame. 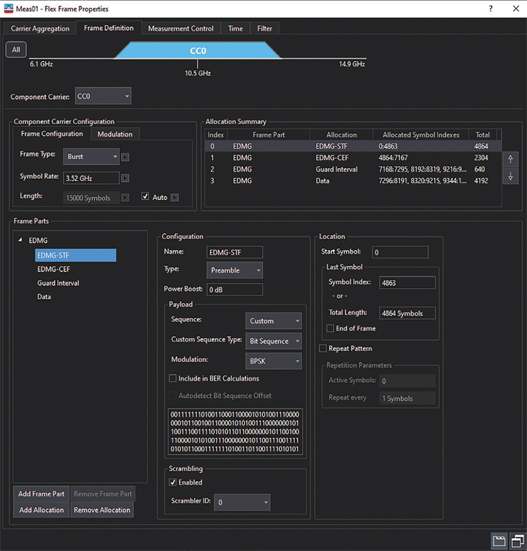 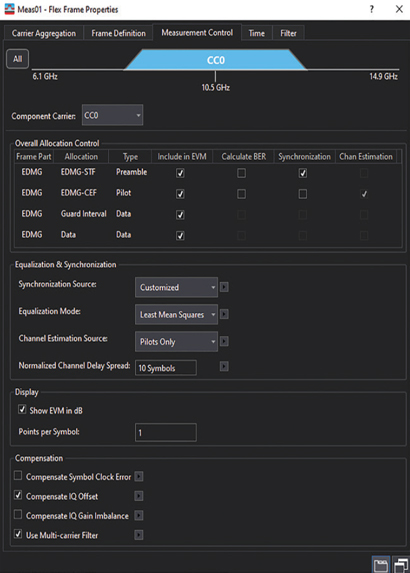 Achieving data throughput of 100 Gbps or more will involve wide channel bandwidths, which can introduce significant linear amplitude and phase impairments. These can be caused by the system hardware, the wireless channel or both. Receivers often use baseband processing, such as equalizers, to address channel impairments. The VSA software provides two equalization methods. For Zero Forcing, channel equalization is done in the frequency domain, by taking the inverse of the frequency response. For Least Mean Squares, equalization is performed in the time domain to minimize the EVM. The normalized channel delay spread enables adjusting the equalizer depending on channel conditions. EVM can be displayed in percent or dB, and symbol clock error, I/Q offset and I/Q gain imbalance can be compensated, if that is enabled. 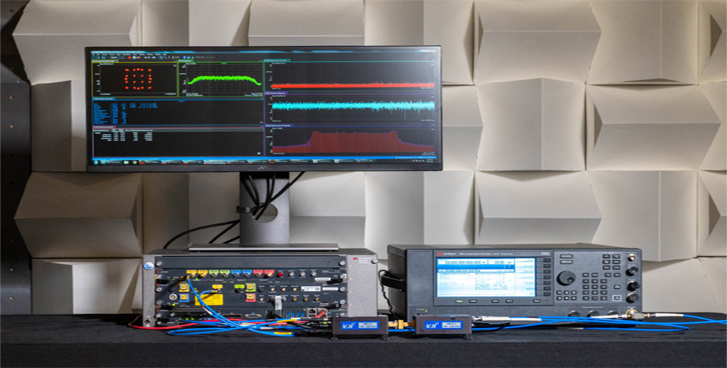 To illustrate the use of the VSA’s flexible frame capability for 6G research, Keysight performed a case study (see Figure 3). An M8195A arbitrary waveform generator generated the wideband IF at a center frequency of 6 GHz. Using an 8.8 GHz symbol rate and root-raised-cosine filter, the occupied bandwidth was approximately 10 GHz. The IF signal was up-converted to 144 GHz using a Virginia Diodes (VDI) G-Band up-converter, bandpass filtered using a VDI waveguide filter and down-converted back to 6 GHz using a VDI G-Band down-converter. A Keysight PSG analog signal generator provided the local oscillator signals for both the up- and down-converters. The down-converted IF was digitized with an M8131A digitizer for analysis with the VSA flexible frame demodulation software capability.

Figure 4 shows the 144 GHz signal with an occupied bandwidth of approximately 10 GHz using 256-QAM modulation. The preamble and pilot signals, for synchronization and channel estimation, respectively, used π/2 BPSK modulation. The measured EVM was 4.16 percent. With a symbol rate of 8.8 GHz, the theoretical raw calculated data rate without forward error correction coding rate redundancy is 70.4 Gbps for a single stream of data, i.e., 8.8 GSPS × 8 bits/symbol for 256-QAM.

Keysight Technologies would like to acknowledge VDI for providing the D- and G-Band hardware used for the case study.