We use cookies to provide you with a better experience. By continuing to browse the site you are agreeing to our use of cookies in accordance with our Privacy Policy.
×
Stay Connected :
Home » An Equivalent Circuit and Modeling Method for Defected Ground Structure and Its Application to the Design of Microwave Circuits
Industry News

In this article, the equivalent circuit and modeling method for a defected ground structure (DGS) is proposed, to be used in the design of a microwave circuit. Using the proposed equivalent circuit permits the optimization of the DGS circuits. Simulati... 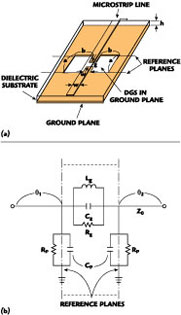 Along a microstrip line, DGS can be achieved by etching a dumbbell shape area in the metallic ground plane. Figure 1 shows a DGS microstrip with a unit defect, which is etched in the ground plane, and its newly proposed equivalent circuit. Design of a Low Pass Filter

Because the designed DGS low pass filter is symmetric, with the input and output DGS circuits identical, it can be separated into two parts. In order to implement the optimized DGS low pass filter from its equivalent circuit, each individual section should be fabricated according to the corresponding optimized unit DGS cell. The input and output sections of the designed DGS low pass filter schematic are implemented with a physical DGS cell with conventional 50 Ω microstrip lines at both ends leading to a parallel capacitor Cp = 0.28774 pF. The intermediate section was designed with 32 Ω microstrip lines at both ends. When these unit DGS cells are used in the optimization of the entire filter, these microstrip lines are eliminated by deembedding the DGS equivalent circuit. As a result, for the final filter design, the input and output sections have transmission lines of 29 and 16 Ω at either end, while the middle section has transmission lines of 16 Ω at both ends. The substrate used in the EM-simulation of the unit cells was an RT/Duroid 5880, 31 mil thick with a dielectric constant ε Ρ = 2.2. The results of the EM-simulation agree relatively well with those of the analysis of the equivalent circuit.

Design of a High Power Amplifier with DGS Circuit

One technique, widely used previously for controlling the harmonics of a power amplifier, is harmonic shorting by the appropriate choice of a quarter-wavelength open-circuited stub with an RF shorting chip capacitor. A DGS cell has been used for this purpose in the output section of the power amplifier configured only as a filter for harmonic rejection.3 The design example of a high power amplifier, presented in this article, has also employed DGS circuits to achieve improvement in efficiency performance. But it differs in the design method compared with that of the previous techniques with DGS circuit. The present design method utilizes the equivalent circuit of the DGS section to optimize the output circuit. By using the DGS equivalent circuit, the optimized output matching circuit, which provides the optimum reflection condition at the fundamental frequency and an excellent rejection of the second harmonic, can be realized. A 20 W LDMOS device was used to implement a class-AB power amplifier operating at 2.11 to 2.17 GHz. The LDMOS device for the implemented power amplifier is an MRF21030 from Motorola. Two choke air-coil inductors that are self-resonant at the fundamental frequency can be used in the bias supply. In order to tune the harmonics, especially the second one, these choke inductors should be considered as a low impedance element to provide a harmonic short via shorted capacitors. However, this is not sufficient in power amplifier applications. Figure 3 shows the schematic of the output circuit including the DGS circuits for a class-AB power amplifier.

There are two ways to reject the second harmonic with DGS circuits. One is the simple implementation of the DGS circuit in the output transmission line of 50 Ω to have a bandgap at the second harmonic frequency. However, it is difficult to realize the exact 50 Ω -DGS line.8 Another is to have the whole output matching circuit showing a bandgap by itself using DGS circuits. The output circuit includes the parallel LC resonator with parallel-connected capacitors at both ends, which corresponds to the unit DGS section.11,12 The output matching circuit involving DGS circuits is optimized to satisfy the optimum load reflection coefficient,

Lopt, by using this equivalent circuit for the unit DGS. Also, this optimized output matching network suppresses the transmission of harmonics. In the previous design method, the output circuit with DGS, which could provide the optimum load reflection coefficient, was designed by iterative EM-simulations for a DGS. However, this method uses the circuit optimizing procedure for the design of a power amplifier including the DGS circuit, which is represented by its equivalent circuits.

The substrate used for the design and implementation of the output matching circuits is Taconic's TLX-9, which has a dielectric constant of 2.5 and a thickness of 30 mil. At 2.14 GHz and Vds = 27 V, an optimum load impedance of ZL = 11.65-j42.05 Ω was obtained for maximum output power. The implementation of the actual optimized DGS cell used in the amplifier output circuit could be achieved by a simple conformal mapping formula between the dimensions of the original unit cell and the frequency response of its equivalent circuit. To obtain more accurate dimensions of the DGS circuit, iterative 3-D EM simulation is required. Figure 4 shows the comparison of circuit- and EM-simulations for the output matching circuit of the power amplifier. Despite differences in the comparison of the overall simulated performances, the S-parameters are well matched at the fundamental frequency of 2.14 GHz. It is noticeable that by employing the designed output DGS matching circuit for a power amplifier, an excellent rejection for the second harmonic power by 40 dB can be expected.

By using the optimized output DGS matching circuit, a simulation for the output power spectrum with two-tone excitation was performed. Figure 5 shows the predicted fundamental output power and IM product spectral outputs from the amplifier with an input of two tones of equal amplitude at 2.1400 and 2.1405 GHz. The amplitude of the fundamentals for the two-tone simulation was 27 dBm. The predicted results for the designed power amplifier with the DGS matching circuit show fundamental signals of 40.1 dBm and IM3 distortion products of 7.8 dBm.

Design of a Microwave DGS Oscillator 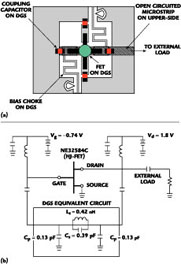 An external lumped element or device mounted on DGS is represented as the parallel-connected element or device with the equivalent circuit of the unit DGS section. Thus, the DGS circuit provides a parallel feedback path to the mounted device on DGS. The equivalent circuit model and the modeling method for a DGS circuit are detailed in a previous paper.12 The effect of an external lumped element on a DGS circuit can be explained by the parallel connection with the equivalent circuit of a DGS.16 The oscillator uses a defected ground structure section as a feedback loop for simultaneously inducing the negative resistance and a passive frequency-selective circuit. The DGS oscillator was designed with a NE32584C GaAs hetero-junction FET in common source configuration for achieving the gate-to-drain feedback. The final design of the DGS oscillator circuit involves the DC chokes by using quarter-wavelength transformers and radial stubs. The harmonic balanced simulation on the designed DGS oscillator shows an estimated fundamental output level of 15 dBm with excellent second harmonic rejection performance.

The small deviation of the cutoff frequency performance in the EM-simulation can be attributed to accumulated discontinuity effects at the junction of microstrip lines and DGS cells. However, both simulations demonstrate the optimum performance in the passband and stopband. The return losses are less than -20 dB up to 4 GHz and the second harmonic rejections are greater than 40 dBc in both simulations. The fabricated DGS low pass filter exhibits a minimal insertion loss (better than -0.2 dB) from DC to 4 GHz.

A possible wide stopband exists above this passband, which can be enhanced by cascading several DGS cells in series. The measurement shows good agreement with the simulations on the optimized three-section DGS low pass filter. Finally, since implementation of the proposed DGS low pass filter is based on the optimization on its equivalent circuit, the filter design procedure is greatly simplified.

The performance of the designed output DGS matching circuit, described previously, shows good agreement with that of the optimum load condition. The power amplifier designed with the output DGS matching circuit was expected to show improved efficiency by rejection of the second harmonic. In order to investigate the performance improvement of the power amplifier designed by the proposed method, three kinds of power amplifiers have been fabricated with different types of output matching circuits and their performances compared. Recently, in order to improve the efficiency of a power amplifier, Lim, et al.3 have used an output circuit with DGS in which the cell is designed without consideration of its equivalent circuit. In contrast, the output DGS matching circuit described in this article has been optimized to obtain the load conditions providing the maximum output power and the desirable harmonic rejection to improve the efficiency. The dimensions of the DGS cells used in the previous method were identical, while those of the DGS cells included in the optimized output circuit are different since each cell is optimized, using its equivalent circuit.

Because of the remarkable reduction of the second harmonic output, the resultant PAE of the optimized DGS matching circuit was improved by 2.5 to 6 percent compared with that of other power amplifiers. The fabricated power amplifiers are shown in Figure 10 . 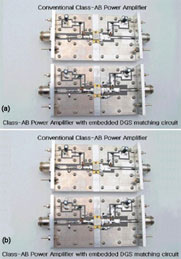 Figure 11 shows the measured output spectrum of the fabricated DGS oscillator. The oscillation frequency ω or of the DGS oscillator is 8.94 GHz, while the resonant frequency ω o of the DGS circuit is near 10.2 GHz. The role of the DGS section in the oscillator presented in this article is to simultaneously achieve a feedback loop and a passive frequency-selective circuit. When the DGS serves as a resonant circuit, the parallel resonant circuit in the equivalent circuit of the DGS is combined with the parallel capacitance, Cp1. This is the reason why the oscillation frequency of the self-resonant oscillator is lower than the resonant frequency of the DGS circuit. The output power of the oscillator is 9 dBm at Vds = 1.8 V and Vgs = -0.7 V. This circuit dissipates 20 mW from a 1.8 V supply. The PAE of the presented oscillator is close to 40 percent. The relatively high output power is due to the choice of the gate-to-drain feedback circuitry. The designed DGS oscillator produces very low harmonic contents. The second harmonic is only -31 dBc below the fundamental frequency. The phase noise at 100 kHz offset from the carrier (fo = 8.94 GHz) is measured to be -87.61 dBc/Hz. The phase noise performance is degraded due to the poor quality factor of the implemented DGS feedback loop. Figure 12 shows photographs of the fabricated DGS oscillator.

Jun-Seok Park received his BS and MS degrees in electronic engineering and his PhD degree in radio frequency and monolithic microwave and integrated circuits from Kookmin University, Seoul, South Korea, in 1991, 1993 and 1996, respectively. In 1997, he joined the department of electrical engineering at the University of California at Los Angeles, where he was a post-doctoral researcher. From 1998 to 2003, he was an assistant professor in the division of information technology engineering at Soonchunhyang University, Asan, South Korea. He is currently an assistant professor at Kookmin University's school of electrical engineering. His current research involves RF and microwave hybrid module design using low temperature co-fired ceramic (LTCC) techniques and surface acoustic wave devices.

Circuit Modeling of Spurline and Its Applications to Microstrip Bandstop Filters