We use cookies to provide you with a better experience. By continuing to browse the site you are agreeing to our use of cookies in accordance with our Privacy Policy.
Home » Architecture of the Cospas-Sarsat Global Satellite Distress and Safety System for Military Applications
Aerospace and Defense Channel

This article describes the global international Cospas-Sarsat satellite distress and safety system (SDSS) integrated with low earth orbit (LEO), medium earth orbit (MEO) and geostationary (GEO) satellite constellations that provides services at sea, on land and in the air. The Cospas-Sarsat space segment integrated with the near-polar LEO constellation is known as the LEOSAR subsystem, the space segment integrated with the MEO is known as the MEOSAR subsystem and the space segment integrated with the GEO constellation is known as the GEOSAR subsystem. Similarly, the Cospas-Sarsat ground segment consists of local user terminal (LUT) stations, known as the LEOLUT, MEOLUT and GEOLUT subsystems, and the associated regional Mission Control Centers (MCC) connected with the Rescue Coordination Center (RCC) and local Search and Rescue (SAR) infrastructures. This article also reviews satellite repeaters providing SDSS service via satellite beacons known as emergency position indicating radio beacons (EPIRBs) for maritime, personal locator beacons (PLBs) for land, personal and emergency locator transmitters (ELTs) for aeronautical applications. In addition, types of satellite beacons and testers, LUT receivers with antennas, the Cospas-Sarsat Data Distribution Plan and the Alert Data Distribution and Operating System are described.

Oceangoing ships are sinking or disappearing, airplanes are crashing in disasters without a trace, land vehicles and expeditions are being lost in the wild and other causal emergencies are emerging that threaten many lives and property at sea, in the vast inner landscape and airspace around the world. The constant advancement of technology and the extremely improved use of radio have historically been the goal of those in charge of solving the problem of SAR at sea, on land and in the air. In the early history of mobile radio, only 120 years ago, radio stations were installed on ships to improve the safety of life and property at sea.

Although these improvements started well and helped save many lives and assets, they were not effective enough in the event of a sudden, catastrophic loss of a carrier platform. The most effective improvements occurred at the end of the previous century with the improvement of safety of life at sea using MF/HF and very high frequency (VHF) radio and the recent development of safety systems, such as the integration of a new digital selective call (DSC) radio integrated with Cospas-Sarsat and Inmarsat satellite systems. These new integrations, known as the Global Maritime Distress and Safety System (GMDSS) developed by the International Maritime Organization and the Future Air Navigation System (FANS) of the International Civil Aviation Organization (ICAO), can be used to improve safety and security at sea and in the air.

In 1999, the author of this article invented a better Global Aeronautical Distress and Safety System (GADSS) than the still not fully operational “long way” program of ICAO’s FANS. Since 2005, he has published chapters on GADSS, and in 2020, Springer published his book on GADSS Theory and Applications. 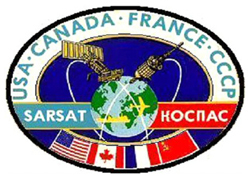 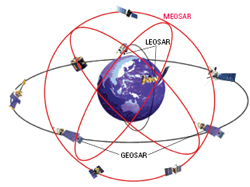 The Cospas-Sarsat system is a joint international satellite-assisted SAR system established and signed in 1979 under a memorandum of understanding (MoU) among agencies of Canada, France, U.S. and the former USSR (today Russia).

Following the successful completion of the demonstration and evaluation phase begun in September 1982, a second MoU was signed on October 5, 1984, by the Department of National Defense of Canada, the Centre National d’Etudes Spatiales of France, the National Oceanic and Atmospheric Administration (NOAA) of the U.S. and the Ministry of the Merchant Marine (MORFLOT) of the former USSR (Russia). Shortly after, the Cospas-Sarsat system was then declared operational in 1985. Its first emblem is shown in Figure 1.

On July 1, 1988, the four states providing the space segment signed the International Cospas-Sarsat Program Agreement, which ensures the continuity of the system and its availability to all states on a non-discriminatory basis. In January 1992, the government of Russia assumed responsibility for the obligations of the former USSR. Several other states, non-parties to the agreement, have also associated themselves with the program and participate in the operation and the management of the system.1-3

Figure 2 illustrates the Cospas-Sarsat network of LEOSAR, MEOSAR and GEOSAR satellites. Currently, the LEOSAR subsystem contains five American SARSAT, NOAA and PEO satellites, while the Russian first generation of Cospas satellites are not operational. Russia has launched Meteor-M as new generation of this constellation. 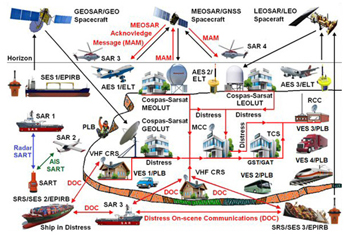 The GST and GAT satellite network cannot use Cospas-Sarsat satellites, but ships or aircraft can send tracking messages via Inmarsat or Iridium satellites, tracking control stations and RCC for SAR operations. These new solutions can improve the positioning, tracking and detection of ocean ships and aircraft in emergency situations and facilitate their detection if they are missing or hijacked.

2. Scene II – All land vehicles (VES), such as trucks, buses and trains, as well as a person in distress, may manually activate PLBs and send distress messages via GEOSAR, MEOSAR and LEOSAR satellites and ground facilities to SAR forces.

3. Scene III – Aircraft (AES) in distress may manually or automatically activate their ELTs and send distress messages via GEOSAR, MEOSAR and LEOSAR satellites and ground facilities to SAR forces.

4. Scene IV – All ships equipped with a SAR transponder (SART) after activation at sea can be detected by radars onboard SAR ships, aircraft and helicopters for enhanced tracking of the position of ships in distress. It is recommended that aircraft also be equipped with a ship’s SART, so that after an emergency landing of an aircraft at sea, they can activate their own SART devices due to their simple identification using SAR radars.

5. Scene V – All ships equipped with an automatic identification system (AIS) SART device after activation at sea can be detected by the AIS receiver onboard SAR ships, aircraft and helicopters for enhanced tracking of the position of ships in distress. In addition, AIS SART or DSC receivers installed onboard SAR units can detect very small special AIS man overboard (MOB) devices mounted on clothing or on lifebelts; which, after activation, enable vessels in the vicinity of a man overboard incident to respond quickly and efficiently to locate and recover a person in the water. It is obvious that these solutions can be used to rescue the crew and passengers after the forced landing of an aircraft on the sea surface.

6. Scene VI – The Cospas-Sarsat service via LEOSAR and GEOSAR satellites is only a one-way transmission of distress signals, while the MEOSAR system enables two-way transmission; namely, it transmits distress signals and receives a confirmation of receipt. In fact, the MEOSAR system provides a special service of MEOSAR Acknowledge Message (MAM) sent by a MEOLUT station via a MEOSAR satellite to EPIRB/PLB/ELT terminals (highlighted in red in Figure 4).

7. Scene VII – All ships and aircraft in emergency or distress situations can communicate via their onboard VHF radios and provide distress on-scene communications (DOC) with SAR units. At the same time, all SAR units can use DOC for their mutual communication.2-5

The Cospas-Sarsat space segment architecture includes three types of satellites to collect and relay emergency messages from the user via the ground segment:

1. Spacecraft in the LEO constellation carry either the Cospas or the Sarsat payload, which is generically referred to as the LEOSAR subsegment. The LEOSAR system is the first designed and it is the longest one in use (see Figure 4). In fact, all radio beacons, such as EPIRB, PLB and ELT, send distress signals via LEOSAR satellites to LEOLUT (LUT) receivers. From there they are sent via MCC and RCC to SAR forces.

2. Spacecraft in GEO constellation carry a SAR payload, generically referred to as the GEOSAR subsegment, which works like the LEOSAR network.

3. Spacecraft in the MEO constellation carry the MEOSAR secondary payload installed on the global navigation satellite system (GNSS), such as the U.S. GPS, Russian GLONASS and European Galileo, which started in 2013 to operate like previous networks. 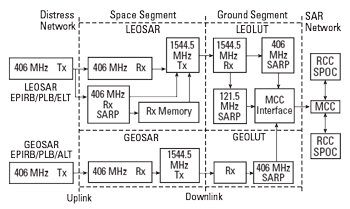 In general, the Cospas-Sarsat LEOSAR and GEOSAR space segment configuration and its relation with the ground segment is shown in Figure 5. The distress alerts sent by LEOSAR or GEOSAR beacons on the ultra-high frequency (UHF) of 406 MHz are relayed via the appropriate LEOSAR or GEOSAR satellites to the LEOLUT or GEOLUT ground network subsegment, MCC/RCC, SAR point of contact (SPOC) infrastructures and SAR forces.