We use cookies to provide you with a better experience. By continuing to browse the site you are agreeing to our use of cookies in accordance with our Privacy Policy.
×
Home » A 2.4 GHz CMOS Power Amplifier with 20 dBm Output Power for Bluetooth and WLAN Applications
Industry News Semiconductors / Integrated Circuits

This article presents a 2.4 GHz CMOS power amplifier (PA) with an output power of 20 dBm using a 0.25 µm 1P5M standard CMOS process. The PA uses a diode connected NMOS transistor functioning as a diode linearizer. It is believed that this is the first ...

In the standard 0.25 μm 1P5M CMOS process, the NMOS transistor has a drain-source breakdown voltage of approximately 5.4 V and a knee voltage of approximately 0.5 V. With the limited 2.5 V drain DC supply voltage and a poor power handling capability, designers face a severe challenge when designing a CMOS power amplifier. To reach high output powers, above 20 dBm, designers must use large size NMOS transistors to implement a PA, although it will decrease the frequency response due to the increase in parasitics.

Figure 3 shows the schematic and layout of the two-stage PA with a chip area of 1100 x 700 μm2 including bonding pads. The output stage operates in class AB (near class B) to obtain high efficiency and the output transistor is 960 μm wide.

The input stage operates in class AB to offer enough power gain, and the size of the input transistor is chosen to be one third of the output transistor's size.

Because the metal-5 spiral inductors offered by the foundry are 10 μm wide and cannot carry a high current density, both of the RF chokes are placed off-chip. The diode linearizer is formed by a 80 μm wide diode-connected NMOS transistor and is placed in the output stage as the gate biasing circuit.

To avoid the loss of model accuracy, parts of the input and output matching networks are placed off-chip, but some matching information is kept in mind during simulation, including the effects of the FR-4 PCB test fixture and passive components. After the final tuning of the input and output matching networks using microstrip lines, the fabricated CMOS PA shows satisfactory performance in power gain and output power characteristics.

Due to the large size of the output stage transistor, it is split into two separate parts and placed on opposite sides. Figure 4 shows a photograph of the PA in an FR-4 PCB test fixture.

The measurements are performed on an FR-4 PCB test fixture. The PA chip is connected to the PCB test board with aluminum bond-wires. The equivalent model of the bond-wire is approximately 1nH/mm. The measured small-signal gain is 11.2 dB and the input return loss is 24 dB at 2.45 GHz, as shown in Figure 5.

Figure 6 shows the measured output power and power-added efficiency (PAE) of the PA using the linearizer. It exhibits an output power of 20 dBm and a PAE as high as 28 percent.

The EVM measurement of the PA, without and with the linearizer at a 18 dBm main channel power output, shows a slight improvement of 0.24 percent. The summary of the measured characteristics of a linearized 2.4 GHz CMOS PA are shown in the Table 1. 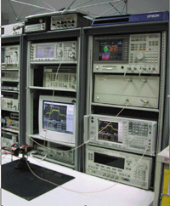 It demonstrates the great potential of the standard CMOS process in designing and manufacturing a 2.4 GHz PA for Bluetooth and WLAN 802.11b applications. 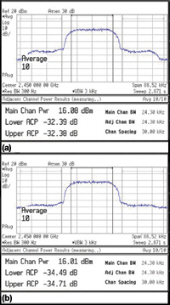 The authors would like to thank the Chip Implementation Center (CIC) of the National Science Council, Taiwan, ROC, for supporting the TSMC CMOS process.

Cheng-Chi Yen received his MSEE degree from National Cheng Kung University, Tainan, Taiwan, in 2002, where he worked on 2.4 GHz CMOS power amplifiers and RFICs for his master study. He currently works for the AIROHA Technology Corp. as an RFIC designer. His research interests include RFIC/MMIC design for wireless communication systems.

Huey-Ru Chuang received his BSEE and MSEE degrees from National Taiwan University, Taipei, Taiwan, in 1977 and 1980, respectively, and his PhD degree in electrical engineering from Michigan State University, East Lansing, MI, in 1987.

From 1988 to 1990, he was with the Portable Communication Division of Motorola Inc., Ft. Lauderdale, FL. He joined the department of electrical engineering at National Cheng Kung University, Tainan, Taiwan, in 1991, where he is currently a professor.