We use cookies to provide you with a better experience. By continuing to browse the site you are agreeing to our use of cookies in accordance with our Privacy Policy.
×
Home » CES2021 Review - Screen Envy
Industry News CES2021 featured many new innovations in consumer electronics. Verizon Chairman and CEO Hans Vestberg delivered the opening keynote discussing 5G as a the framework of the 21st century addressing tele-medicine, AR/VR, tele-education and Smart Cities. He announced the Verizon is working with the NFL to deliver many views of the stadium in real time with stats and other information available in the NFL app. He also discussed their work with museums for AR and 3D tours plus smart cities like San Jose real time traffic data services. He also addressed applications with robotics and drones for delivery services.

LG had some of the most interesting products with the announcement of a see-through TV that is a transparent 55-inch TV that resembles a sheet of glass and also a phone with an expandable screen that rolls up inside the unit. The see through TV could be the future of TV as it could be part of your window or be used for collaboration in a conference room with people on both sides able to see the TV and each other. The expandable phone will allow a phone size device to roll out the screen to the size of a tablet for watching movies or gaming. Both are slated for release this year so not far away. 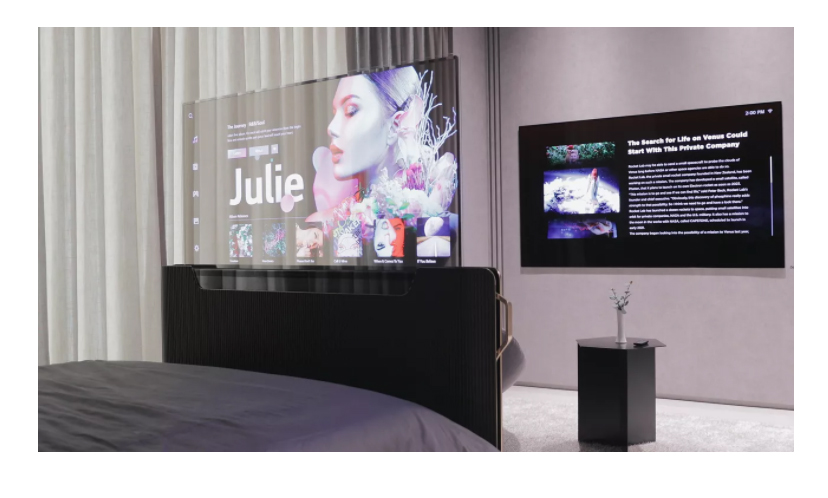 While 5G gets a lot of attention, WiFi 6 and 6E are really taking hold in the industry with the benefits they will offer in the area of IoT, industrial, automotive and consumer applications. The newer 6E standard was recently approved and adds the license free 6 GHz band that really opens up with bandwidth capabilities and these standards have reduced latency for AR/VR and other applications. With increasing congestion in the legacy 2.4 and 5 GHz bands, the US FCC has approved 1.2 GHz of unlicensed spectrum for the 6 GHz band along with other regions around the world, which will transform the Wi-Fi landscape.

That that end, NXP introduced a Wi-Fi 6E device that will make use of this 6 GHz band and extend Wi-Fi capacity by bringing higher throughout, increased capacity, reliability, and improved latency. Designed for access points and service provider gateways, the CW641 unlocks increased speeds of over 4 Gbps and multi-user performance in the new 6 GHz band, providing greater capacity and lower latency, which dramatically improves the Wi-Fi user experience. Mission critical, high bandwidth, low latency applications like mesh back haul and cloud gaming are ideal for migration to 6 GHz, freeing up the 5 and 2.4 GHz bands for other lower bandwidth applications. NXP’s new Wi-Fi 6E Tri-Band SoC makes it possible to take full advantage of the 6 GHz spectrum to boost the performance of in-home mesh networks, streaming high-resolution music and videos, online gaming, video calling, digital downloads, data-heavy web content, and numerous other use cases. Beyond access point applications, the CW641 SoC sets the stage for high performance Wi-Fi 6E applications across consumer, automotive, industrial, and Internet of Things (IoT). The 4x4 MIMO 6E offering has up to 160 MHz channels with PHY rates of 4.8 Gbps. Other products are on their way soon.

Analog Devices was addressing a broad range of applications from automotive to drone delivery to wearables and more. They are working with customers in all of these areas to realize higher performance, lower cost systems. On the automotive front, ADI products are powering everything from longer-range, more efficient EVs, to sophisticated in-cabin technology that transforms driving into an immersive entertainment experience. Analog Devices' autonomous solutions are helping entire supply-chains become more responsive, efficient, safe and sustainable. For the smart home, ADI technology is transforming our homes into places of immersion, efficiency and healthcare. And on the smart wearables side, ADI technology is taking on the toughest sensor, algorithm and power challenges, helping to develop new products that can open up completely new market opportunities. All while being machine washable and effortlessly powered.

With IoT devices growing rapidly, Fractus Antenna has deployed over 25 million virtual antenna chips in IoT devices, these really simplify the design and reduce the footprint so they are now in reference designs by leading RF companies such as Sierra Wireless, Nordic Semiconductor, Sequans and Cavli.

Qorvo introduced multiple new products timed with CES, leading with two front-end modules (FEM) for Wi-Fi 6E. The QPF4656 was designed for consumer routers and gateways, the QPF4632 for enterprise power-over-ethernet applications. Both FEMs are being sampled. For cellular base stations, the company announced four low noise amplifier (LNA) MMICs, which are in production. The four cover 100 MHz to 6 GHz and have noise figures from 0.3 to 0.7 dB. The premier product in the family, the QPL9547, covers the full 100 MHz to 6 GHz band, has 0.3 dB noise figure at 2 GHz, 19.3 dB gain and 39.3 dBm third-order intercept point.

The last product category announced by Qorvo comprised two antenna routing switches for the automotive emergency calling system, named eCall. In case of an accident, eCall enables the primary cellular link to be switched among the antennas in a car to maintain connectivity with emergency services. eCall has been mandatory on all cars sold in the European Union since 2018 and was available in the U.S. beginning in 2008. Qorvo’s two AECQ grade switches were designed for eCall (the QPC1251Q) and dual SIM dual active (DSDA) eCall (the QPC1252Q). Both support Telematic Control Unit (TCU) configurations, with the ability to be hot switched up to +29 dBm input power, and save approximately 50 percent of the printed circuit board footprint.

Although CES was a virtual event, Skyworks was demonstrating its 3.3 to 3.7 GHz power amplifier (PA), the SKY66318-21, which was developed for small cell and mMIMO applications. The virtual demonstration integrated the PA with a Texas Instruments transceiver, running Xilinx’s crest factor reduction and digital pre-distortion signal processing algorithms. The PA can provide +28 dBm output power over a 200 MHz bandwidth. Skyworks said it has shipped more than 1 million of the SKY66318-21 PAs.

Mobile Phones Get Smarter at CTIA with Touch Screen Tech