We use cookies to provide you with a better experience. By continuing to browse the site you are agreeing to our use of cookies in accordance with our Privacy Policy.
Home » Applications & Considerations for Double-Ridge Guide Horn Antennas
Aerospace and Defense Channel Broadband Channel

Using a dielectric sidewall causes the degrading gain reduction to occur on-axis at the upper frequency limit of the DRGH, likely due to higher-order modes (e.g., TE20, TE30). However, removing the sidewalls entirely degrades the low frequency performance: the on-axis beamwidth increases and the gain decreases.2 For this reason, a metallic grid is often used; it has a less severe gain dip at the upper frequencies without degrading the low frequency performance of the antenna.

Electromagnetic (EM) emissions emanate from many sources, including pulse generators, oscillators, digital logic circuits, switching power supplies, motors and converters - typical components found in electronic equipment. For standards and testing, the EMI from these components is typically classified in two categories: conducted and radiated emissions. Radiated testing involves emissions testing of near-field and far-field radiation, as well as immunity testing, i.e., determining the susceptibility of a device to emissions from surrounding devices. Conducted emissions are related to the EM signals from nearby or interconnected circuits. Standards for EMC testing include:

Typically, EMI tests occur within an open-area test site (OATS), test cell or screened room (i.e., a reverberating or anechoic chamber). Test setups use a table, where the antenna is placed at a specified distance above the ground, e.g., 0.8 m, and a determined distance from the equipment under test (EUT), typically from 3 to 30 m. The height of the antenna varies between 1 and 6 m and the EUT is rotated until the maximum emissions are observed. The tests are conducted in both horizontal and vertical polarizations, using various approaches to speed testing: an automated test setup with the EUT on a turntable, antenna on a mechanical mast, software-controlled measurement equipment and broadband antennas.

Several types of antennas are used for EMI testing (see Table 1). Typically, active antennas - antennas that include components such as integral amplifiers, preamplifiers and other active devices to amplify the signal - are effective for low frequency measurements, such as active loop and active rod (monopole) antennas. E-field measurements typically use monopole antennas, while low frequency H-field measurements use loop antennas. Broadband antennas, such as the biconical antenna, can be used for the 30 to 300 MHz range, with a log-periodic antenna for 300 MHz to 1 GHz and broadband horn antenna from 1 to 40 GHz. 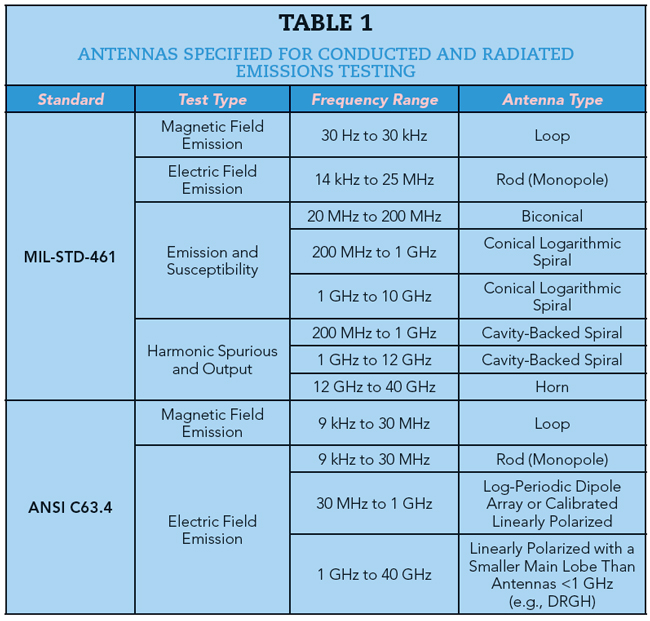 For most EMC standards, the antenna is the primary measurement transducer coupling the measured variable in the antenna’s radiated EM field into the measuring receiver, so understanding its behavior in the test environment is critical. The E-field strength is specified in units of V/m at a specified distance from the EUT, while the test receiver is calibrated in voltage across a 50 Ω impedance. The antenna is calibrated to the voltage at the 50 Ω input of the receiver for a given electric field strength (V/m) at a given frequency. This calibration is known as the antenna factor (AF), the incident E-field divided by the voltage measured at the receiver and specified in dB/m. While the typical parameters for measuring antenna performance are gain, VSWR and directivity, these are not as important for EMC emissions measurements as the AF. The AF gives a more accurate assessment of the antenna’s performance, ensuring the antenna is oriented for maximum response. For a typical test setup (see Figure 3), the field strength at the antenna (μV/m in dB) is equal to the sum of the AF, the attenuation of the interconnecting cable (in dB/m) and the voltage at the receiver (μV in dB):5

The AF must be known to adequately measure test site parameters such as the site VSWR and normalized site attenuation (NSA). Determining the NSA involves measuring the insertion loss between the terminals of the transmit and receive antennas and including the AF of each antenna:

The NSA of the test site is compared to the loss of an ideal site, based on a list of theoretical values over frequency, with the differences known to be deviations caused by test site imperfections. The CISPR standard for a test environment requires the site be within ±1 dB of the ideal test site, which requires a test environment to have very tight tolerances. As the calibration accuracy depends upon the site, these tolerances are necessary for measurement accuracy. Two forms of calibrations are typically performed: a tuned dipole in an OATS and the standard site method. Using a tuned dipole as a reference antenna requires retuning at each frequency and depends on the integrity of the antenna and test site. The standard site method bypasses these conditions, instead using three uncalibrated antennas that are calibrated using three measurements between pairs of antennas. However, this approach also requires a high-quality test site.

EMC testing requires a balance between the main lobe beamwidth and gain of an antenna. The broader the beamwidth, the more energy can be collected by an antenna over an area; on the other hand, the higher the gain, the better the system noise performance. Highly directive antennas offer less sensitivity to off-axis reflections, making the imperfections of the test site less relevant. However, less area is covered at a distance, so larger objects cannot be tested. In this case, EUTs are measured in consecutive sweeps with the antenna aimed at different parts. Broader beamwidth often correlates with lower gain, so more power is required. In this case, a balun is often used at the antenna’s feed to prevent damage to the antenna, particularly for biconical and log-periodic antennas, where power can accumulate in the core and windings of the antenna structure. The addition of a balun limits the input power that can be applied, which subsequently increases the VSWR and reduces the total power being radiated and the overall efficiency of the test system.

Practically, waveguide generally dissipates excess heat from high transient powers efficiently because of the large metallic surface area of the guide. For this reason, they are often used in the antenna feeds for high frequency radars, where high-power handling is required. The DRGH antenna has inherently higher frequency performance and higher power handling -- to hundreds of Watts -- compared to other broadband antennas used for EMC emissions testing, so a balun is typically not necessary when using DRGH antennas.

In an EMC test environment, the DRGH aperture dimensions are specified by many standards, defined by the distance between the antenna and the EUT. For instance, the ANSI standards require the aperture dimension of a horn antenna to be small enough so the measurement distance is equal to, or greater than, the far-field distance.6 The far-field distance, also known as the Rayleigh distance (Rm), is given by:

where D is the largest dimension of the antenna aperture and λ the free space wavelength.

The DRGH antenna design modifies the classic pyramidal horn antenna to extend the bandwidth. While this leads to design challenges associated with the DRGH’s radiation pattern at higher frequencies, structural adjustments can address them, such as tailoring the ridges and replacing the H-plane flares with a grid-type metallic structure. Also, the high frequency operation of the DRGH antenna can be extended without compromising its low frequency performance. The DRGH is specified in EMC emissions testing standards because of its broadband performance and coverage above 1 GHz. It is a desirable alternative to the log-periodic and biconical antennas for EMC applications.

A Multi-octave, Open-boundary, Quad-ridge Horn Antenna for Use in the S- to Ku-bands