We use cookies to provide you with a better experience. By continuing to browse the site you are agreeing to our use of cookies in accordance with our Privacy Policy.
×
Home » Super-Nyquist Direct Digital Synthesis Enables Next Generation Radio Systems

A novel active filter, based on regeneration, provides tunability, variable bandwidth, stable high Q, fast frequency shifting and ease of integration. It allows any super-Nyquist image to be isolated, including frequencies far higher than the clock. A direct digital synthesizer (DDS) can directly modulate a signal with the modulation preserved in the image. The passband of the active filter can be adjusted to match the modulation, allowing dramatic simplification of radio design. These capabilities are confirmed using an Analog Devices AD9914 DDS. Both single and multi-pole filters are used to isolate multiple image tones.

Direct digital synthesis (DDS) is a long-established technique to generate RF signals. The fundamental output frequency is limited to less than half the clock frequency - the Nyquist limit. The DDS output includes image tones around the clock and its harmonic frequencies. These image tones are also usable, enabling the DDS to generate much higher frequency tones. Filtering is required to make use of these super-Nyquist frequencies by eliminating undesired tones, especially the fundamental. A fixed bandpass filter (BPF) can be used, but this limits the inherent agility of the DDS. With a fixed BPF, the DDS frequency range is limited to the non-overlapping range of single images. Further, a fixed BPF passes all spurs within its passband, typically requiring additional cleanup. Conventional tunable bandpass filters can be used to overcome this limitation, although their slow tuning speeds limit agility. They present integration challenges as well.

In RF processing there is typically a requirement to generate a signal of precise frequency and high purity. Often the application calls for an agile signal such that the generated frequency must be able to shift quickly while maintaining precision of instantaneous frequency and phase. DDS is a natural choice for generating such signals, as it has complete flexibility offered by digital processing - the waveform voltage values are stored in memory and converted to the desired signal by a digital-to-analog converter (DAC). The input clock sets the rate at which the voltage values of the DDS are output to the DAC. Frequency is determined by a stepping algorithm that determines the address increment in the DDS ROM lookup. The stepping algorithm can be complex and result in arbitrary frequency or phase modulated signals. Together with an IQ modulator, also done digitally, precise quadrature amplitude modulation and arbitrary waveform generation (ARB) signals can be produced.

The DDS digital value is output to a DAC and is converted to a quasi-analog waveform which produces a staircase-like signal with harmonic distortion. Also, the instantaneous output frequency is generally not commensurate with the input clock frequency, resulting in numerous spurious frequency components, some of which can be close in frequency to the desired frequency.

In a modern DDS implemented in non-exotic semiconductor technologies, the clock is limited to the low GHz range, meaning that the nominal output is limited to a few GHz. Typically, these signals can be upconverted, to support systems with higher frequency requirements, but with considerable added complexity and filtering.

Another alternative is possible. A DDS generates image tones around the clock and its harmonics. These tones are at lower power levels than the fundamental but are otherwise perfect copies.1 Using these image tones, i.e. super-Nyquist tones, it is possible to generate RF signals at many multiples of the DDS clock frequency. The primary challenge is filtering. A DDS output naturally contains a myriad of spurious signals. Using a super-Nyquist tone adds further difficulty with not only more spurious tones, but with one or more at higher power levels than the desired tone.

A previously disclosed agile tunable filter technology2 that makes use of regeneration, or positive feedback, can be used to realize a super-Nyquist DDS. Any integrated circuit technology with usable gain at the frequency of interest can be used to realize high Q tunable poles.3 Unlike earlier regenerative circuits, this is inherently stable and does not require quenching circuits. These regenerative filters have multiple resonators, and result in a single, stable, dominant pole. Dominant poles with Qs of over 5,000 have been demonstrated. They have been used in a three-pole filter, agile both in frequency and bandwidth.2 This enables the design of filters operating anywhere in the RF, microwave and mmWave spectrum. Filter tuning range can be arbitrarily large, depending on the implementation. 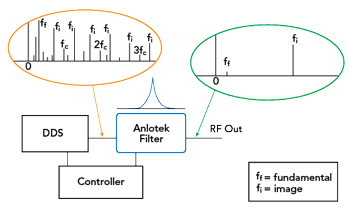 A block diagram of the super-Nyquist DDS is shown in Figure 1. The unfiltered DDS output spectrum has many tones. The nominal DDS output tone, ff in the figure, is the direct fundamental output. There are various spurs, for example from the DDS clock (fc). Of interest here are the image tones, fi. These are exact copies of the fundamental, replicated around harmonics of the clock (xfc). Figure 1 shows the primary DDS output (ff) suppressed in favor of one of the higher frequency super-Nyquist images (fi).