We use cookies to provide you with a better experience. By continuing to browse the site you are agreeing to our use of cookies in accordance with our Privacy Policy.
×
Stay Connected :
Home » Optimizing Wireless Connectivity with Embedded Antennas
IoT/M2M/V2V Channel By 2025, 25 billion IoT devices and connections are expected to become deployed globally.1 From those, 5 billion units are expected to be cellular IoT. Cellular IoT, in all its variants (NB-IoT, LTE-Cat-M1, LTE, Cat-M2, 5G, …) provide the fastest path to develop an IoT system globally, taking advantage of the ubiquitous deployment of mobile cellular networks. From asset tracking devices, to smart meters, smart city sensors and health monitor systems and alarms, cellular IoT infrastructure provides the reach to make sure every device is connected when needed and wherever it is needed.2-6

The deployment of those 5 billion cellular IoT devices is estimated to be at a rate of 25% CAGR, and on average, that means about 1 billion cellular IoT devices added every year to the networks. Such a huge growth on the demand puts a significant pressure on electronic and RF engineers all over the world, that need to develop compact, reliable devices in a fast way and at a low cost. To develop a reliable and at the same time compact cellular IoT device, the antenna is a key component. Because every bit of information, every bunch of sensor data is delivered through it. In many instances, just sticking out a conventional external monopole or dipole antenna is not an option as wearables, trackers and many other applications cannot afford to feature a protruding element out of the device that can be unintentionally broken or even become subject to vandalism. 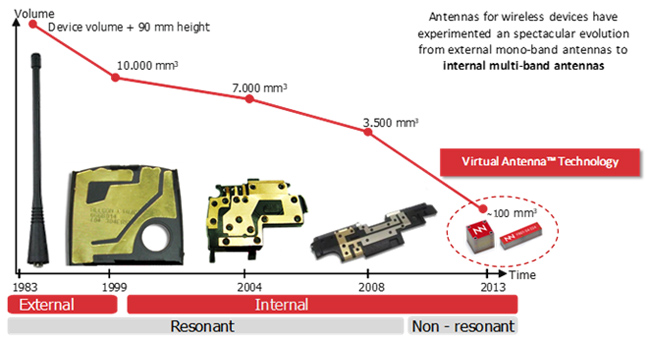 The good news is that embedded antenna technology has evolved in the last 20 years to extremes that seemed just physically impossible a couple of decades ago (see Figure 1). First, fractal related internal antenna technologies became pervasive in about every mobile phone in the first decade of the new millennium. Lately, the new generation of ‘antennaless’ chip antenna boosters has enabled a quantum leap in antenna miniaturization, cost and flexibility in IoT development.7-17 Through a tiny set of SMD components, which are about x10 smaller than older technologies, those antenna boosters deliver multiband, global cellular connectivity through an off-the-shelf part that only needs some minor circuitry design to deliver the required performance to about any band and to about any device.

To ensure a fast and economic development of the new generation of IoT devices, module and chip makers have created a number of prototyping kits, developing platforms and reference designs that makes sure that any IoT engineer has everything ready to create an unlimited number of applications just bounded by imagination. From chipset, to sensors and embedded antennas, those IoT open hardware platforms have everything ready to create the newest IoT device in a jiffy.

For instance, the mangOH® Yellow environment delivers all the hardware, software and cloud tools to ensure that a low power cellular IoT application is developed in a short period of time.18,19 The super smart edge open source solution has a compact form factor (65 x 42 mm, smaller than a credit card) and includes a tiny RUN mXTEND™ antenna booster component, part of the Virtual Antenna™ family. The mangOH® open license allows engineers to reproduce the design as needed and prototype ideas quickly and go to market in weeks, not years. 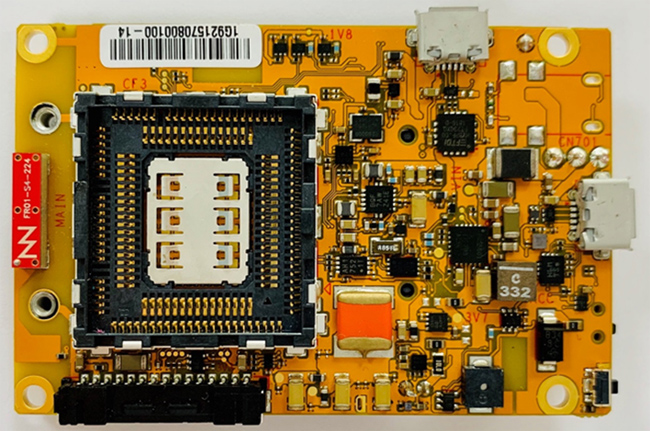 Figure 2.  Antenna booster RUN mXTEND™ (the red tiny component on the left side of the PCB) embedded in the mangOH® Yellow. Being the antenna booster a SMD component, it can be easily assembled with a conventional pick-and-place machine

The cellular embedded IoT antenna in the mangOH® Yellow is an example of the new generation of tiny antenna boosters available for multiband connectivity. The miniature chip antenna component is connected to the RF transceiver through a matching network that shapes the frequency response of the wireless platform. And the good news is that going from a mangOH® Yellow prototype to a final product does not require changing the antenna part: the same off-the-shelf component will fit any device with just a little tune of the matching network. Even the range of frequency bands can be modified with such a little change. This feature enables a fast development of the final product while making the its BoM and Time-to-Market much more predictable than using custom solutions.

But there is more. If the same mangOH® Yellow platform is to be used to design a completely new and different second IoT device, the antenna component will still be the same. Again, a matching network retuning will make sure that the same chip antenna component fits your entire range of IoT product portfolio.

Let’s then dive into the world of embedded antenna boosters and learn how cellular connectivity can be optimized following some simple recommendations in a platform such as mangOH® Yellow.

How to boost the RF signal

With an open source hardware sensor platform (gerbers and schematic are open to wireless designers), the PCB of a new cellular IoT design based on mangOH® Yellow can be customized according to customer design needs. It is interesting to note that this PCB change can not only meet mechanical criteria for a new device but also be designed in a way that radioelectric performance is improved. In this sense, this section presents easy and effective ways to modify the PCB in order to boost the LTE antenna performance embedded in the cellular IoT device based on mangOH® Yellow. Four changes are proposed and analyzed here (see Figure 3):

As shown in the graphs below, applying one or a combination of these changes can significantly improve the radiation performance of your mangOH® Yellow, with improvements that range from 1 and up to 10 dB in the low frequency region.

These results can be easily replicated using an electromagnetic CAD tool to model the main parts of the device: the antenna booster, the PCB including the ground plane and the substrate (FR4, 1 mm thick with er=4.15 and tand=0.014).

To measure the relative improvement of the different design changes, the following figure of merit, D, is proposed. The total efficiency (ht) averaged at 698-960 MHz and 1710-2690 MHz is calculated for each scenario (Figure 4). Then, these averaged values are compared to the original device. The total efficiency ht is the fraction of input power that is radiated to space. This efficiency depends on two factors: the system losses on one side hr , which include losses due to plastic covers, components on the PCB, matching network and losses in the  antenna booster itself, and the antenna impedance mismatch (S11) on the other side. Total efficiency is then defined as ht=hr·(1-|S11|2). For instance, if the power of the LTE module delivered to the antenna is Pout=23 dBm and the total efficiency is ht=50 % (-3 dB), the output radiated power (also known as total radiated power, TRP) is 23-3 dB=20 dBm since TRP(dBm)=Pout(dBm)+10log10(ht). Same argument applies to reception as the antenna is a reciprocal device. 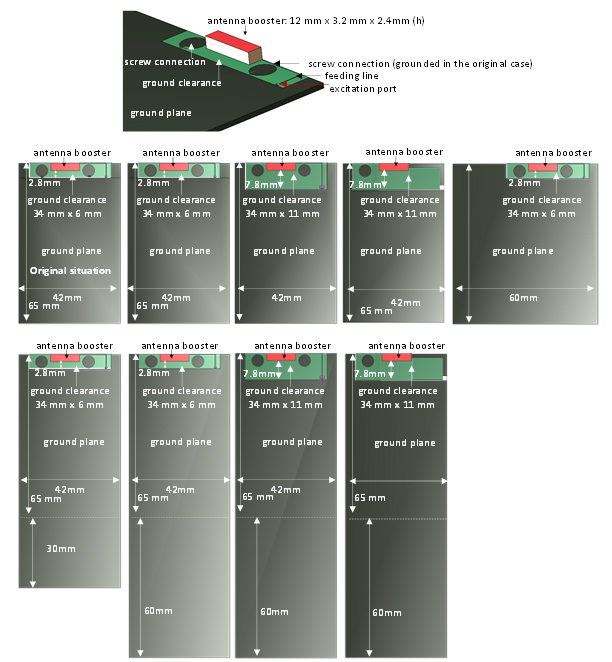 Figure 3. Cases considered in the analysis: screw connectors, change ground clearance, change feeding location, and change PCB size. Each scenario has a matching network at the excitation port which comprises lumped elements (capacitors and inductors). Only the original case has the screw connectors connected to the ground of the PCB; at the other cases, such screw connectors are floating (non-grounded).

With these considerations, the figure is merit D is then defined by eq. (1):

In this sense, a D=3 dB increment means that total efficiency is increased by 3 dB when compared to the original device. This figure of merit D is useful to determine the impact of each scenario when doing a new PCB design in order to get the best of the antenna performance in the device (see Figure 4).

For each scenario, the matching network at the excitation port is optimized in order to maximize total efficiency with Microwave Office AWR Design tool by Cadence. Such matching networks comprise lumped inductor and capacitors including losses.20

Results from Figure 4 reveal several interesting design guidelines to be followed when optimizing the RF performance of a mangOH® Yellow platform:

These tips are useful design recommendations for optimizing performance at the conception phase of an IoT project when the designer has still freedom to modify the PCB size. These design rules should be made at the very beginning of a design project. This will minimize and even avoid cumbersome PCB modifications while the project is in the development phase when all electronics, chipsets, and mechanics are already fixed. Therefore, it is recommended always to think first about these design lines when designing a cellular IoT device based on any platform in order to get the best of it.

Once the PCB size is fixed, embedding a Virtual Antenna™ in an IoT device follows a simple design flow consisting of three simple steps:21 1) placing the antenna booster in the PCB; 2) designing the matching network for your PCB size; 3) testing and fine tuning the real device, which makes the whole embedded antenna design process much faster, cheaper and easier than the traditional choice of developing a custom antenna.