We use cookies to provide you with a better experience. By continuing to browse the site you are agreeing to our use of cookies in accordance with our Privacy Policy.
×
Home » Apple Navigates COVID-19, Maintaining Revenue and Introducing New Products
Industry News RFIC Channel

Despite the disruption from the coronavirus pandemic circling the globe, Apple managed to release the new iPhone SE, iPad Pro, Magic Keyboard and MacBook Air and maintain essentially flat revenue during its second fiscal quarter, compared to the prior year’s quarter.

“It has been a very different quarter than we were expecting when we last talked to you at the end of January,” said Luca Maestri, Apple’s CFO, during the company’s earnings call yesterday.

“Based on Apple’s performance during the first five weeks of the quarter, we were confident we were headed toward a record second quarter at the very high end of our expectations,” said Tim Cook, CEO.

However, during the next five weeks, China locked down to stem COVID-19, which impaired the iPhone supply chain and reduced demand within China. Apple’s retail stores in China closed. The last three weeks of the quarter, ending March 28, saw the societal lockdown extend to Europe and the U.S., reducing demand for iPhone and wearable products, according to Cook.

Commenting on the current quarter, Cook said the retail stores in China reopened during March, and the business there is showing “further improvement in April as compared to March.” In the rest of the world, despite Apple’s retail stores being shuttered, “in the second half of April, we’ve seen an uptick across — really across the board.”

Although the demand for Apple products and services is increasing, Cook said, “Given the lack of visibility and uncertainly in the near term, we will not be issuing guidance for the coming quarter.”

Cook said Apple is seeing strong demand for the new iPhone SE, and he expects it will appeal to Android phone users and be attractive in geographic regions where median incomes are less.

“It’s, if you will, the engine of our top phones in a very affordable package. And I think — and it’s faster than the fastest Android phones. And so, it’s an exceptional value.”

Apple reported revenue of $58.3 billion during the second fiscal quarter (Q2), which was 0.5 percent better than last year’s quarter, with earnings per share (EPS) of $2.55, up almost 4 percent year-over-year. 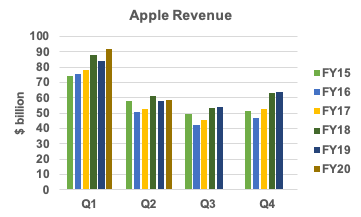 The iPhone contributed half of total revenue, $29 billion, followed by services at 23 percent, which set a revenue record of $13.3 billion. 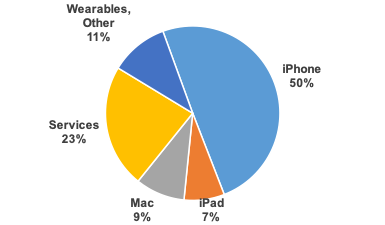 Services and wearable products grew revenue year-over-year, while all other segments declined. iPhone revenue was down 6.7 percent year-over-year. 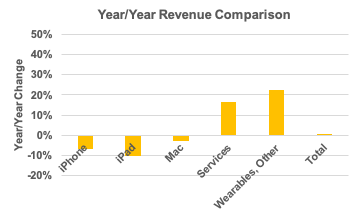