We use cookies to provide you with a better experience. By continuing to browse the site you are agreeing to our use of cookies in accordance with our Privacy Policy.
Home » 5G Drives mmWave Technology Across Multiple Industries
Aerospace and Defense Channel 6G/5G/Massive MIMO Channel The technology in today’s world continues to move higher in frequency to solve problems and improve performance. It is these millimeter wave (mmWave) frequencies that offer hope in solving the toughest requirements in many industries such as communications and defense. 5G communication systems benefit from years of research done by defense companies for different applications but similar needs. In telecommunication links, where the need for higher data rates continues to surpass existing techniques, solutions are moving to 28 and 39 GHz.

A result of this increased IC development at high frequencies is an increase in the number of technologies that militaries need to contend with on the battlefield. Defense applications, such as when saving a stranded crew member at sea, benefit from the improved resolution of high frequency radars that can more clearly resolve objects. Additionally, many of the ICs designed for telecommunications must be low cost and suitable for high volume manufacturing to make them easier to deploy. A byproduct of all this activity is the need for test instruments to verify that the solutions function across the application space.

The Intertwined World of Wireless Electronics

Industries can often benefit from technology created for a different industry’s application. The microwave oven is generally credited to an engineer working on radars who noticed a candy bar melting in his pocket while testing. We see this happening today with 5G telecommunications trying to realize the benefits that the defense industry has created with phased array antennas. In the future, it’s very likely that the defense industry will, in turn, be able to realize new technologies made possible by the advancements in 5G, creating a cyclical relationship between them.

Similarly, satellite communications are undergoing a shift in technology by moving away from geosynchronous equatorial orbit (GEO) or geostationary satellites and exploring low Earth orbit (LEO) satellites that will offer higher data throughput with better coverage of the planet. This idea moves from one or just a few GEO satellites orbiting the Earth to potentially thousands for a given network. There are many operators currently trying to create new LEO constellations for broadband internet use, while many of the companies vying to supply the satellites are the same defense companies that perfected the GEO satellites that are critical for military surveillance and communications.

This cycle of benefitting from a technology that was created for a different purpose has occurred in various markets and will continue for years to come. We will now explore why mmWave frequencies help both defense and communications.

As mobile communications have proliferated over the past 20 years, we’ve seen an increased demand for higher data rates. Every few years, there has been a new wireless standard introduced that defines new protocols to increase data throughput. These improvements in throughput are often correlated to more sophisticated modulation schemes, which can simultaneously transfer multiple pieces of information. As the modulation schemes become more sophisticated, the ability to transfer more data grows. However, there comes a point where additional increases in modulation complexity do not offer a significant improvement in throughput. Thus, a common way to modulate a signal is to spread it over a range of frequencies around a carrier frequency (see Figure 1). As a result, another way to improve the throughput is to increase the bandwidth of the modulated signal (FBW) by spreading it over a wider frequency range. In order to continuously increase the amount by which we can spread the signal, we need to increase the carrier frequency (FC). This ability to transmit more data simultaneously by moving to higher frequencies is pushing applications toward mmWave frequencies. 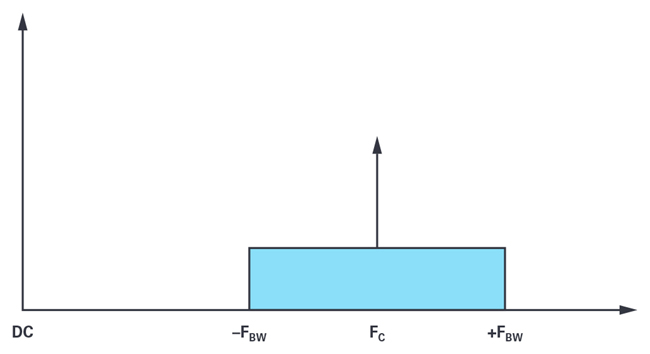 How Electronic Warfare Is Impacted by 5G

Today’s military conflicts are increasingly fought electronically, bringing rise to the idea of electronic warfare. One of its key components is radar, which simply transmits a signal and waits for it to return, mapping the field-of-view of the radar. Radar systems have been developed for over 100 years with the key benefit of detecting and mapping objects that are beyond human visibility. This gives the radar operator a considerable advantage over the adversary who does not have radar. For this reason, radar technology has been continually developed over many years. As a result, we now see radar used in daily weather reports, air traffic control, and emerging applications such as in the automotive industry, where radar is used to sense the distance between a car and an object. Traditional low frequency radar systems in UHF and VHF frequencies have been used as early detection radar over very long distances. Fast moving aircraft more often operate at X-band frequencies (8 to 12 GHz) that benefit from a higher resolution and smaller antennas. Radar systems used in fighter jets to deploy and target missiles often operate at Ka-band frequencies (33 to 37 GHz). There is increased development happening at 94 GHz for guided munitions and missiles. There are several benefits in moving to higher frequencies for radar systems and we can see the benefits by looking at the range resolution and angular resolution that help to characterize the ability to resolve an object. The first benefit of moving to higher frequencies is that the size of the antenna shrinks to obtain a given angular resolution, which is the key to fitting into a small munition. Another way to view it is that the angular resolution increases at higher frequencies for a given antenna size. The range resolution of the radar is proportional to the modulation bandwidth. As a result, as applications need higher resolution, there is a benefit in moving to higher frequencies.

Traditionally, electronic warfare systems for defense companies have operated between 2 to 18 GHz, which covers S-, C-, X-, and Ku-band radars. As the range of threats increases, so will the electronics to listen for them, and ultimately counteract them. We can see that 5G equipment operating at 28 and 39 GHz is close to the existing Ka-band frequencies used for missile guidance. As a result, new requirements for electronic warfare systems will extend to cover the 5G frequencies ranging from 24 to 44 GHz, and there will be many more electronics available at these frequencies for defense applications to consider on the battlefield. Very often, the main roles of electronic warfare are to listen for a threat and then jam the threat electronically, while remaining undetected. Since a threat can come from various frequencies, the listening equipment, followed closely by the jamming equipment, need to address wide frequency bands of operation.

A key technology that has been used in defense applications for many years has become desirable for 5G telecommunications. Phased array antenna technology is desirable for 5G with several features that the defense industry also finds valuable. Such key attributes include the ability to transmit multiple data streams or radiation patterns. In defense applications, this could allow a fighter jet to track multiple targets at one time, while in 5G telecommunications, it allows them to transmit data to multiple users at one time. Similarly, defense applications desire a beam where the energy is targeted in one direction, providing a low probability of intercept or jamming. Telecommunications benefit from consuming less power dissipation because they are more efficiently able to target the information to the user.

Both applications benefit from the ability to reposition the beam almost instantly. There are many additional benefits that both the telecommunications and defense industries will appreciate that make this technology attractive.

The 5G Effect on ICs

The world today is very dependent on mobile communications. The advanced technology supporting this 5G cellular infrastructure represents a significant growth area for many telecommunications equipment providers and their IC-based supply chain as shown in Figure 2. This significant growth opportunity has spawned millions, and perhaps billions, of dollars of investment to realize these next-generation products. The core components that make up these systems are the ICs that route the data through the networks. We can see that each aspect of the IC supply chain is adapting and evolving, as shown in Figure 2. Starting with the foundry processes available to the final test solutions of those products, we see significant innovation in the technology supporting these products.

The various semiconductor foundries that offer wafer fabrication services create the base material for the ICs and continue to innovate. Many foundries have developed new process technology to compete and enable this new 5G technology. One example of such an improvement could be a move to more cost-effective optical lithography compared to electron beam lithography. Another benefit could be integrating new functionality into one process node to compete in this price-sensitive market.

The IC design evolves as new process technology becomes available. With new functionality available in one process node, the IC designer is able to combine certain features into one product or extract a higher level of performance from the core transistors than was previously possible. These trends ultimately lead to chips that are more integrated and more easily deployed. Also attractive, as we expand to mmWave frequencies, is the ability to take advantage of low cost packaging, which enables easier assembly. Traditional defense assemblies at mmWave frequencies have been a chip-and-wire assembly, which translates to a small metal housing where chips are wire bonded to each other. This is not a high volume method of assembly and is often more expensive than surface mount assembly techniques. The main motivation for this in past years has been size constraints. However, increased integration into smaller packages with increased performance makes surface-mount assembly much more attractive.

Test solutions such as the over-the-air testing have become a reality for phased array antennas and their ICs at 28 and 39 GHz. Previously, to be able to test a phased array antenna, one would often need an anechoic chamber that is large, difficult to construct, expensive, etc. Now these test solutions are becoming much more affordable, smaller, and available off the shelf, which greatly expands the number of vendors that can offer a full antenna solution without a significant investment to measure the final product. Phased array antennas have migrated from a technology that mainly defense companies and universities could explore to one that is becoming mainstream. Not only does it allow for the telecommunication companies targeting 5G opportunities to take advantage of this new technology, but to better defend against emerging defense threats as well. It is likely that previous challenges for less experienced antenna engineers can now be resolved much more quickly with accurate measurement techniques that are available off the shelf from standard instrumentation vendors.

The result is many more mmWave products are available in the industry that can be deployed in communications, as well as in defense applications. Very often the products that are used for cellular infrastructure are close in specification and function to what is required for the defense and instrumentation industry. It’s this growth of readily available ICs and test solutions, enabling a fast time to a final product, that is significantly de-escalating the level of threats in the mmWave frequencies for the defense industry. Figures 3 and 4 show the performance of a couple of examples of mmWave products.

The advancements in telecommunications networks have generated a reaction in peripheral industries that will unfold in the years to come. At the center of this migration is the need for more information in the form of data that is likely to create new weapons that will never physically strike an object. The applications in today’s world are moving higher in frequency and it is only beginning.