We use cookies to provide you with a better experience. By continuing to browse the site you are agreeing to our use of cookies in accordance with our Privacy Policy.
Home » Tuning Electrically Short Antennas for Field Operation The inductances for tuning are found in commercial input/output switchable antenna tuners operating from 1.5 to 30 MHz. The tuning network looks like an “L,” where the switched shunt capacitors can be connected to either side of the inductors.7 Figure 11a shows the matching ranges of the tuner with the capacitors on each side of the inductors, and Figure 11b shows a simplified schematic of the main capacitor bank that is switched to either the input or output side of the inductors. The inductors are wound with 0.048 in. diameter, enameled copper wire and have approximately 0.04 μH step size. The capacitor step size is 9.375 pF. This tuner has nine switchable inductors, 10 switchable capacitors and two positions for one of the capacitor banks (i.e., on either side of the inductors), yielding 1,048,576 tuning combinations. The 6 pF capacitor at the output represents the ceramic antenna mount or connector. For best performance, antenna tuners use air core coils or very low permeability powdered iron cores. As such, some of the measured intermodulation distortion (IMD) products result from ferrite saturation, not from the power amplifier driving the antenna.8-9

Figure 10 Schematic of a Collins antenna tuner with an input transformer. 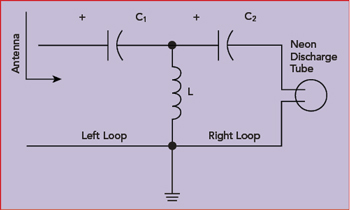 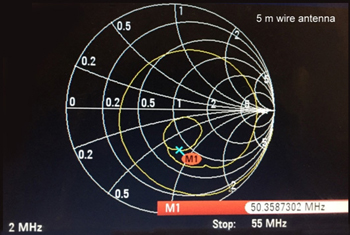 Occasionally, a tuner design uses a highpass, T-configuration rather than a π (see Figure 12). The LC1 forms one resonant circuit, LC2 forms the other circuit and the two are tuned to the resonant frequency. The left loop and the right loop are dependent. Generally, when the value of C2 is too small, input resonance occurs yet there is no loading and no output power obtained. This is the flaw of the design: the highpass filter is mathematically over-determined. The left loop can be in resonance, and no output power (voltage) is available in the right loop. Other drawbacks of this frequently-used design are higher loss, the lack of harmonic suppression and LC combinations where the tuner absorbs most, if not all, the power without tuning the antenna perfectly.6 For electrically short antennas, this can be overcome with a voltage probe at the output, such as a pre-ignited neon bulb. The neon discharge tube glows when there is maximum voltage at the output of capacitor C2. If the frequency is below 30 MHz, a blue color is emitted; if the frequency is above 30 MHz, a pinkish color is emitted.

For a 5 m wire antenna with an 8 m ground wire and π tuner, Figure 13 shows the measured antenna impedance, and Table 1 summarizes the antenna impedance and the L and C values needed for matching, assuming a 1:1 (50 Ω) input transformer.10-11 The LC combination minus the capacitance value of the antenna rod or wire must resonate at the test frequency. Figure 14 shows the antenna resonance tuning at 2 MHz, and Figure 15 shows the simulated Z11 vs. frequency, with Re{Z11} plotted in Figure 15a and Im{Z11} in Figure 15b. The lower curve in Figure 15a closely matches the desired 20 Ω at 2 MHz; however, it assumes no losses in the tuner. The upper curve, assuming a realistic Q of 200, shows 22 Ω at 2 MHz. As power is I2R, a 10 percent increase in Re{Z11} causes a power loss of approximately 10 percent, from 20 to 18 W available for radiation. These losses are frequently overlooked. While the two-element tuning network produces the desired real and imaginary values, the 8 m ground wire is too short at this frequency, so there is no useful grounding. 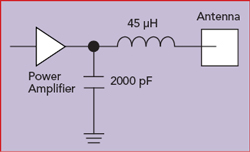 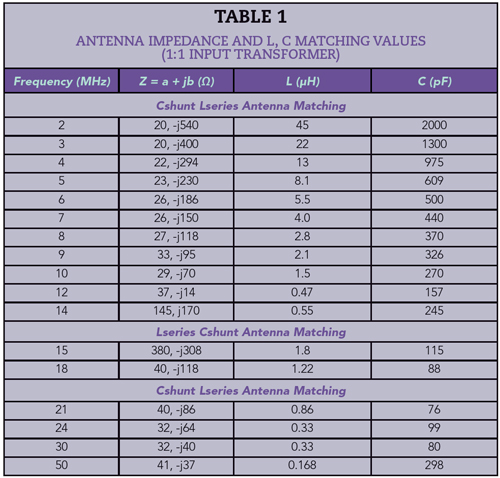 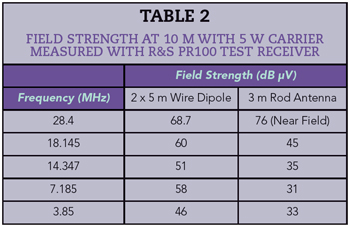 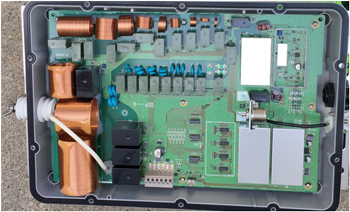 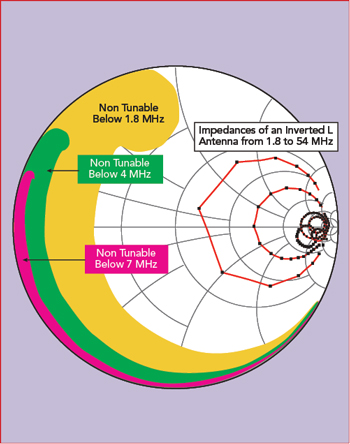 An antenna tuner can improve the matching but not the radiation. At a single frequency, the asymmetric dipole shows a resonance close to 12 MHz, the antenna to case impedance is 37 Ω - almost purely resistive - and the system works. A symmetrical, non-resonant antenna like an inverted V with an elevated tuner and an asymmetrical antenna cable isolating the radio and RF, by actually grounding it, will give superior results. If this is not possible, to obtain a symmetrical antenna system a ground connection to some electrical wire, fence or similar structure is recommended. If the built-in antenna tuner can tune end-fed, high impedance, low current, long wires, this may be a good solution, although the radio is no longer a manpack, more of a portable solution for a stationary setup. Some counterpoise is needed for good results.

Table 2 shows field strength measurements with a 2 x 5 m non-resonant, wire dipole in a V configuration, tuned using an ATU; the measurement is made at 10 m distance using a test receiver with antenna. For comparison, the table includes the frequency dependent field strength for the 3 m rod antenna.

Radio amateurs often use ICOM tuners. Generally, they are reliable in all weather conditions and, with a huge tuning range, find a good match and fit all the 100 W radios, even non-ICOM radios with a simple adaptor. The tuner layout shifts the coils by 90 degrees to minimize magnetic coupling (see Figure 16). Any number of inductors will not mutually couple if they are placed with their axes forming a 54.74 degree angle to a common plane,12 although such placement is not always physically ideal. The ICOM AH-4 tuner has nine inductors, 10 capacitors and two positions, equating to 1,048,576 tuning combinations. The tuning range is shown in Figure 17. Part of the magic of the tuner’s effectiveness is the search algorithm.

Figure 18 shows the measured S11 from 2 to 30 MHz of a 2.5 m whip antenna with two ground configurations, floating and next to the body. Floating is the worst case. For a VHF/UHF manpack, Figure 19 shows the antenna S11 measured from 20 to 200 MHz.

Recently, HF communication has fallen out of grace and HF manpacks have become less interesting. The 11-year sunspot cycle causes poor propagation, making the band unattractive. Appliances such as long-life LEDs produce high conducted and radiated interference, and noise blanker implementations in SDRs are not very effective. The difference between summer and winter propagation is also a factor. In the summer months, beginning in May, the D layer of the ionosphere makes day propagation up to 15 MHz difficult; low frequency night propagation works better up to 10 MHz. While propagation forecasts are available on the internet, particularly for long distance connections, 10 to 60 mile connections are more complex: too far apart for VHF/UHF and too close for HF. Frequencies from 1.5 to 8 MHz would work well, but effective use of those frequencies requires better antennas than manpacks have, and local RF noise does not help. The D layer further complicates use of the band. During the day, 5 to 8 MHz provides 300 to 500 mile coverage, which increases to at least 2000 miles shortly before sunset. Two MHz is better for close communication. The old ship SOS frequency (2.182 MHz) has been replaced by satellite telephones.6,12-16 The 20 m radio amateur band for voice operation covers 14.15 to 14.35 MHz. Even for this small difference, propagation may vary significantly, as the coherence bandwidth is small.17

However, the amateur radio communities hang on to low-power operation (QRP) and remain true believers. During hurricane season and other natural disasters, using these portable stations saves lives.

For radio communications, the antenna is probably the most critical part of the link, so grounding and antenna tuner losses should be avoided as much as possible. The inductor is always the lossy part of the ATU, while the capacitors, typically mica, are infinitely better.

For best operation, antenna radials should be λ/4. One is sufficient for tuning; up to four will produce a symmetrical azimuth pattern. When λ/4 is not possible, radials several wavelengths long will do. Connecting the HF radio ground to a large metallic object is a good choice. For the tests supporting this article, a grounding spear of about 10 in., similar to a tent support, was used. 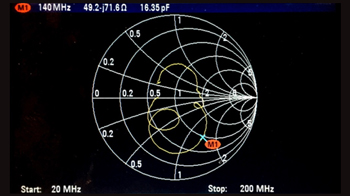 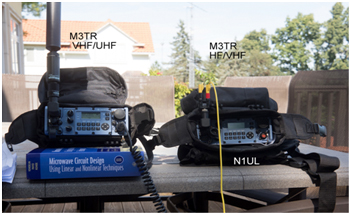