We use cookies to provide you with a better experience. By continuing to browse the site you are agreeing to our use of cookies in accordance with our Privacy Policy.
Home » China’s Smartphone Market Falls 14% in 2018
Cellular 4G/LTE Channel Industry News According to market research firm Canalys, 2018 smartphone shipments in China fell to their lowest level since 2013, 396 million units. Consumers keeping their smartphones longer is one factor, amplified considerably by the economic slowdown in China and consumers’ weakened purchasing power. The latest quarter, Q4 2018, marked a 15 percent year-on-year drop and the seventh consecutive quarter of decline.

As shipments decline, the market is rapidly consolidating. The combined market share of the top five smartphone vendors’ has increased from 73 percent in 2017 to 88 percent in 2018.

“Huawei has penetrated the high-end with technological innovations, and a strengthening brand, which has helped it markedly extend its lead in China. Its dual-brand strategy has been a huge success, with sub-brand Honor helping it cover a broad range of price bands. China continues to be a strong foundation for Huawei and its launchpad for overseas expansion, as Huawei aims to challenge Samsung for global leadership in 2019.” — Mo Jia, Canalys analyst based in Shanghai

“Apple has several challenges in China, and the growing power of competitors is not actually its biggest. As its services division becomes more important in China, it is vital for Apple to maintain or grow its installed base of iOS users. Apple must re-examine its China strategy and find a way to revive its high-end brand imagine, in order to align with the purchasing behavior of local middle-class and upper-class demographics.” — Mo Jia

“Vivo’s market position has changed significantly. Vivo now has a more streamlined portfolio of devices, with a diversified Y-series, the online-only Z-series and the experimental Nex. It has also benefited from a strategy to improve the efficiency of its retail channels. The stabilizing renminbi/USD exchange rate will help Vivo, which has a greater reliance on its domestic market than its rivals in the top five.” — Yiting Guan, research analyst at Canalys

“Xiaomi tried to increase its average selling price in China. It has decided to make Redmi an independent sub-brand designed to directly compete with Honor. Xiaomi’s challenge in 2019 will be to accurately position the two brands, in terms of product, pricing and channels, so that they complement and do not cannibalize one another. If each brand can redefine its positioning well, each will achieve greater market share in 2019.” — Yiting Guan

Leading manufacturers will have even less breathing space in 2019, as Canalys expects the Chinese smartphone market to fall by 3 percent to 385 million units. 2019 will mark the beginning of the 5G era in China, as manufacturers prepare to release 5G devices and operators start to roll out commercial networks. Consumption in China is shifting toward high-end and higher quality. As a result, the average selling price of smartphones is expected to exceed USD$400 in 2021. Competition in the upper mid-range and high-end segments will intensify, and suppliers must focus on bringing the latest technology to consumers to justify the higher price points. 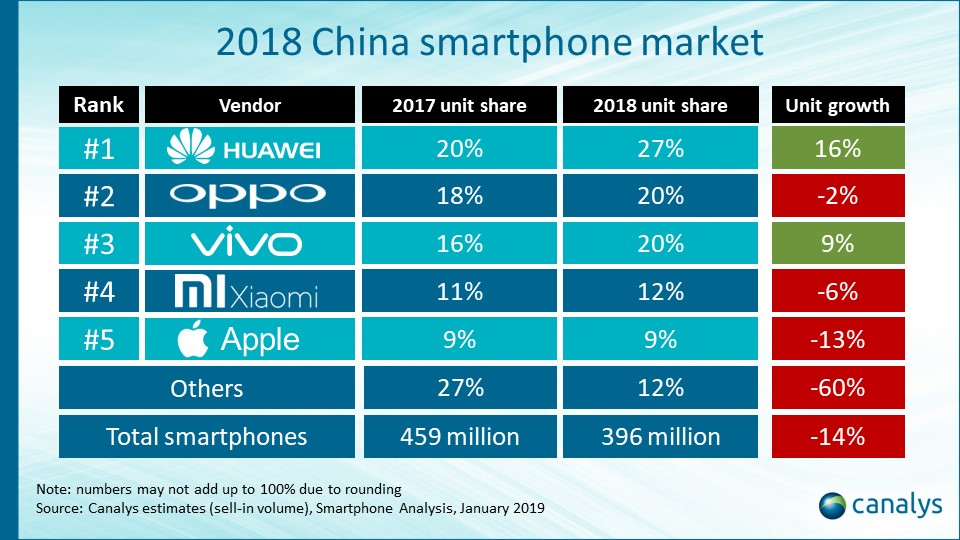