We use cookies to provide you with a better experience. By continuing to browse the site you are agreeing to our use of cookies in accordance with our Privacy Policy.
Home » Small (Cell) Steps to 5G Evolution
6G/5G/Massive MIMO Channel

While playing a virtual reality (VR) game can be surprisingly entertaining, it has one major drawback: the multitude of wires needed to operate the system. Keeping those wires from getting tangled can be quite a challenge, often requiring several pauses during the game. Part of the difficulty is the amount of data VR systems require. Data must be sent to the user’s goggles to enable high resolution video and a dynamic experience; the VR goggles must also stream real-time data regarding the user’s movements and positions back to the system. Because of this, high data capacity cables are needed to connect the user to the VR system and transfer the data. VR systems will eventually evolve into wireless devices. One way to eliminate the wires is with a high efficiency network capable of streaming large amounts of data, e.g., one that employs small cells. Small cells are not just good for improving VR systems; they are also a key enabler of 5G. 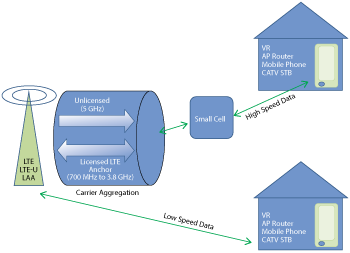 Today, small cells are often installed by cell phone providers to help end users combat connectivity issues. Generally, the providers use a single, narrowband small cell system. However, to realize increased data rates for 5G, next-generation small cells must support ever wider bandwidths. This can be achieved by using wideband systems and taking advantage of carrier aggregation (CA) technology. CA increases data capacity by streaming on a licensed anchor channel and using additional channels, either within the same frequency band or a different band. The result is an increase in the overall data rate.

Use of CA is fairly widespread. The cell phone or tablet used to read this article likely already supports CA. However, some networks have not fully taken advantage of the technology or even deployed it, due to its high cost. Another factor impeding its use is that multiple bands inside one small cell box requires additional power amplifiers (PA) to support the different frequency bands, which means increased power consumption and, often, thermal issues. Highly efficient small cells can overcome many of these limitations. Thanks to new innovative techniques, next-generation small cell boxes with two to three bands and a multiple-input-multiple-output (MIMO) configuration for enabling multiple data streams are now possible. They allow enormous amounts of data to be streamed to a smartphone, tablet or VR device (see Figure 1).

A big chunk of the power budget in a small cell is allocated to the PAs—the devices responsible for transmitting data in an ever extending range—while maintaining data purity. Close collaboration between PA vendors and system-on-chip or transceiver vendors has led to highly efficient systems. One such family of high efficiency PAs hails from Skyworks Solutions. Its SKY6629x family of small cell enterprise PAs offers power-added efficiency (PAE) of 30 to 40 percent and covers the major 3GPP bands from 700 MHz to 6 GHz, including the new band 48 from 3.5 to 3.7 GHz—also known as the CBRS band—and band 46, the licensed assisted access (LAA) or LTE-U band, which operates from 5.15 to 5.925 GHz. While traditional linear PAs have a typical efficiency of 10 percent, the SKY6629x PAs offer 3x efficiency improvement. The increased efficiency enables small cell developers to either design a box with very low power consumption or one with more channels (i.e., more frequency bands for CA). That means no more 1 × 1 systems, as the industry has moved to 2 × 2, 4 × 4 and higher-order MIMO systems. 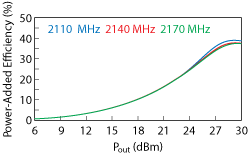 For example, the SKY66294-11 band 66 PA achieves 36 percent PAE at the rated output power of +28 dBm, biased with a 5 V supply (see Figure 2). The output of the PA has an uncorrected adjacent channel leakage ratio (ACLR) of −33 dBc with a 20 MHz, 8 dB peak-to-average input signal (using crest factor reduction). By applying low complexity digital predistortion (DPD), the PA can be linearized to more than -50 dBc, a full 5 dB lower than the -45 dBc specified by the 3GPP standard (see Figure 3). This improvement in performance saves power, reduces thermal effects on the overall system and provides more than 5 dB margin for linearity.

Higher efficiency PAs reduce the total cost of small cell development and deployment. Current small cell boxes are single band systems. Even with only one or two PAs per box, the inside temperature can increase to between 85°C and 90°C. To cool the boxes, developers usually incorporate metal heat sinks and sometimes fans. Lowering PA power consumption with Skyworks’ SKY6629x family eliminates the need for additional metal or fans, providing small cell developers with a viable solution to help minimize power dissipation and solve heat problems. 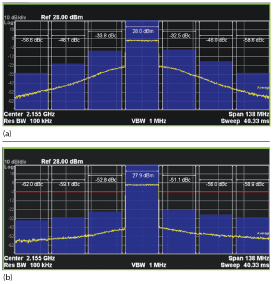 While the obvious application for these high efficiency PAs is in small cells, they have other uses. They can be used in distributed antenna systems, vehicle to everything (V2X) infrastructure for car-to-car communication and self-driving vehicles and consumer electronics products such as high definition wireless cameras and drones. Given their efficiency and ability to be linearized, the PAs in Skyworks’ SKY6629x family have been used as driver amplifiers for higher power, outdoor small cell systems and in the early development of massive MIMO systems for 5G.

Without a doubt, small cell deployment is moving toward 5G and will help to enable a seamless handover from large macro base stations to indoor small cells. Densification of heterogeneous networks (HetNet) is critical to the realization of 5G and will be aided by next-generation small cells. For the industry, these small cells will deliver key benefits, including ease of deployment and smaller, less conspicuous base stations. Because higher efficiency PAs reduce power consumption, “green” technology small cells offer added benefits that the cellular industry can leverage.