We use cookies to provide you with a better experience. By continuing to browse the site you are agreeing to our use of cookies in accordance with our Privacy Policy.
×
Home » Terma Supplies Helicopter Mission Control System to Royal Australian Navy
Aerospace and Defense Channel European Industry News Industry News

Terma has successfully delivered and trialed the helicopter mission control system for the Multi-role Aviation Training Vessel (MATV) MV Sycamore, which completed sea acceptance trials and is now ready for the final handover to the Royal Australian Navy (RAN). 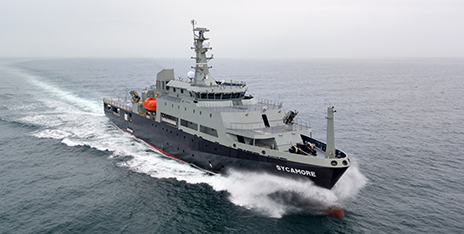 A primary mission for the MV Sycamore is to conduct operational aviation/helicopter training by and for RAN. Consequently, the vessel is equipped with a helicopter mission control system from Terma that comprises the SCANTER 6002 air and surface surveillance radar with IFF and the C-Flex Mission System.

The C-Flex Mission system is located in the aviation control room from where the operator is presented with the situation awareness based on data from the SCANTER 6002 radar and the IFF. This data is correlated and fused into a layered situation picture with sea chart, track overlay, crisp-clear radar video overlay as well as graphical overlays, routes, heli-approach patterns, etc., allowing the operator to concentrate on making decisions and commanding the helicopter in the specific operation.

The SCANTER 6002 radar has become a preferred choice for both navigation and surveillance purposes by a large number of navies and coastguards around the world. The SCANTER 6002 is a solid state X-Band radar that is claimed to provide unique and unmatched small target detection and tracking. It is a member of Terma’s SCANTER radar family with more than 2,700 radars in operation worldwide.

The C-Flex Mission System is derived from the company’s proven C-Flex Combat Management System supplied fleetwide for the Royal Danish Navy (OPVs and frigates) and for several other navies, such as the Romanian Navy, Royal Brunei Navy, Royal Thai Navy, etc. Rather than providing combat management, the C-Flex Mission System provides a mission-oriented command and control solution enabling commercial, coastguard and naval vessels to conduct efficient missions within search and rescue, surveillance, law enforcement and deterrence.