We use cookies to provide you with a better experience. By continuing to browse the site you are agreeing to our use of cookies in accordance with our Privacy Policy.
×
Stay Connected :
Home » Telespazio, Through Spaceopal to Manage Galileo System
European Industry News Industry News RFID/GPS/Location Channel 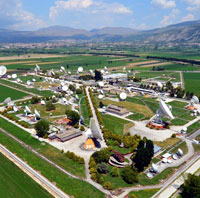 Telespazio, a subsidiary of Leonardo, by means of Spaceopal, a joint venture with DLR GfR of the German Space Agency, was awarded a contract with a value of up to €1.5 billion to manage Galileo, the European satellite navigation system, which officially started on 15 December 2016. Thales Alenia Space, a joint venture between Thales and Leonardo, has signed contracts for €180 million.

The 10-year contract signed by Spaceopal as ‘Galileo System Operator’ covers the operation and maintenance of the Galileo system and its committed performance level: in particular, the operations and control of the system, the logistics and maintenance of the systems and infrastructure as well as the user support services. The Piero Fanti Space Centre of Telespazio in Fucino, Italy will play a key role in carrying out these activities. Telespazio is also engaged in providing a wide range of applications based on Galileo and European Geostationary Navigation Overlay Service (EGNOS) in sectors such as civil aviation, rail transport, dangerous goods management and unmanned aircrafts control.

“We are proud to contribute with our technology and skills to the Galileo satellite system, which will deliver quality services to citizens around the world and will be a key driver of economic growth and competitiveness”, said Mauro Moretti, CEO and General Manager of Leonardo. “Following the ESA’s Ministerial Council, which confirmed the funding of the space programs in which Leonardo is a key industrial partner, first and foremost ExoMars 2020, contracts signed today are a further acknowledgement of the leading role of the company in the European space sector”.

The contracts signed by Thales Alenia Space relate to the supply of engineering activities to support the European Space Agency (ESA) and GSA (European GNSS Agency) in infrastructure development and Galileo services from 2017 to 2022.

Leonardo has always been a key industrial partner of the Galileo program, for which it also provides the attitude sensors to control the position of the satellites and the hydrogen atomic clocks to mark the time, together with a receiver for the PRS service, designed for government entities and critical infrastructures with special security requirements.