We use cookies to provide you with a better experience. By continuing to browse the site you are agreeing to our use of cookies in accordance with our Privacy Policy.
×
Home » Raytheon to Advance Gallium Nitride Technology
Aerospace and Defense Channel Industry News 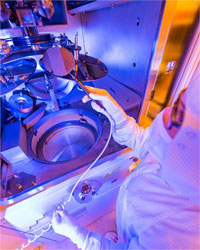 The U.S. Air Force Research Laboratory and the Office of the Secretary of Defense have awarded Raytheon Co. a $14.9 million contract to further enhance its process for producing gallium nitride-based semiconductors. The new agreement follows a previous GaN Title III contract, completed in 2013, and aims to increase the performance, yield and reliability of Raytheon GaN -based, wideband, monolithic, microwave-integrated circuits and circulator components.

GaN is a semiconductor material that can efficiently amplify high power radio frequency signals at microwave frequencies thereby enhancing a system's range and raid handling, while reducing size, weight, power and cost. It is used in a broad spectrum of military radars and defense systems, including the U.S. Navy's Air and Missile Defense Radar and Next Generation Jammer .

"We have only scratched the surface when it comes to harnessing the game-changing power that gallium nitride technology can bring to military applications," said Colin Whelan , vice president of Advanced Technology in Raytheon's Integrated Defense Systems business unit. "This contract will build on the 17-year, two-hundred-plus million-dollar investment Raytheon has made in maturing GaN. Over the next two years, we will further refine our GaN process to push the limits of radio frequency performance while maintaining or increasing yield and reliability."

The first demonstrator of this technology will be incorporated into Raytheon Space and Airborne Systems' Next Generation Jammer program, which is scheduled for low-rate initial production in 2018.