We use cookies to provide you with a better experience. By continuing to browse the site you are agreeing to our use of cookies in accordance with our Privacy Policy.
×
Stay Connected :
Home » Industry Visionary: Q&A
4G/5G/Cellular Microview

On July 14, 2016 the FCC adopted new rules for wireless broadband operations above 24 GHz, making the U.S. the first country to make this spectrum available and leapfrogging other nations in the race for 5G mmWave technology. We thought this was a perfect time to talk with Theodore (Ted) Rappaport, Professor at NYU and the Founding Director of NYU Wireless, who was the first to prove that mmWave technologies were viable for cellular communications.

What exactly did the FCC adopt in the way of frequency allocations and rules in July?

In its July 14, 2016 Report and Order and Further Notice of Proposed Rulemaking (based on the FCC’s original request for comments in GN Docket No. 14-177), the FCC agreed to open up a vast amount of mmWave spectrum for use in a wide range of flexible wireless uses. This is unprecedented, as many of the authorized frequencies were either not available at all for wireless/mobile use, or were previously defined for only certain uses. The Report and Order (FCC 16-89) is 289 pages long, and offers extensive rulemaking for a wide range of new flexible uses that will include mobility, internet access, point to point, as well as satellite use.

To give just a few examples, the new rules will enable new wideband allocations for mobility (for 5G) and a vast range of unlicensed access spectrum with channel bandwidths much wider than ever before used in wireless communications. For example, the new rules provide access to 7 GHz of spectrum for use by unlicensed devices, from 64 to 71 GHz. This turns the current 60 GHz band where WiGig devices operate (57 to 64 GHz) into a contiguous 14 GHz block of spectrum for unlicensed Wi-Fi devices under Part 15 rules. And, for the first time, spectrum in the 28 GHz and 37 to 40 GHz bands becomes available for terrestrial mobile use with flexible rules (turning the old LMDS spectrum bands into a much broader type of licensing for mobile, fixed, portable, etc.). As an example, for the 27.5 to 28.35 GHz and 38.6 to 40 GHz bands, the FCC has allowed incumbent license holders to use their existing spectrum under the expanded new rules and under geographic area licensing rules for new acquirers of spectrum.  For the 27.5 to 28.35 GHz band (28 GHz band), the FCC will use channel bandwidths up to 425 MHz and will issue licenses based on county-sized geographic areas, and in the 38.6 to 40 GHz band (39 GHz band), the FCC shall authorize channel bandwidths up to 200 MHz and Partial Economic Area (PEA) licenses.  In the 39.5 to 40 GHz band, the FCC will maintain the military co-primary fixed and mobile satellite service allocations. 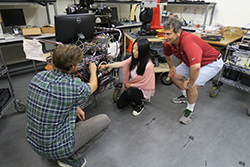 For the 37 to 38.6 GHz band, the FCC instates a band plan that allows for continuity of commercial operations between the 37 and 39 GHz bands, while protecting the spectrum use of a limited number of Federal military sites across the full 37 GHz band, in addition to protecting military satellite use and existing Federal fixed and mobile allocations throughout the band.  In the 37 to 37.6 GHz band, new rules will allow coordinated co-primary shared access between Federal and non-Federal users. Through this new shared licensed structure, the FCC hopes to spawn proposals and collaboration between industry and government to determine new spectrum sharing procedures.

In its historic rulemaking, the FCC also proposes and invites comments on new 40 MHz channel bandwidths for 24 GHz spectrum, and seeks comment on new rules for 24, 32, 42, 47.2 to 50 GHz, and for the 71 to 76 GHz and 81 to 86 GHz bands which are proposed for spectrum sharing as implemented in the Citizens Broadband Radio Service at 3.5 GHz. Fortunately for amateur radio operators, the FCC safeguarded the amateur radio service spectrum at 47 to 47.2 GHz (a good thing for the future of America).

Why did they take this approach of just allocating spectrum and not implementing regulations?

Actually, the FCC did institute very detailed regulations, but they allowed the spectrum usage to be flexible, since commercial 5G and future massively broadband applications and services do not yet exist. By specifying channel bandwidths (license block sizes), and allowing for flexible use,  the FCC is allowing new business models, carriers and applications to arise in a natural manner, well before the 3GPP 5G wireless air interfaces are developed. This will enable rapid early adoption of new technologies while allowing the U.S. to be the de facto standard in the very early days of 5G adoption. The FCC is still seeking further comments in the coming months to help them solidify the rules and make further refinements.

What impact will these historic regulations have on the industry and race toward 5G communications?

These regulations will enable incumbent wireless carriers with mmWave spectrum to immediately partner with major carriers and equipment makers, and will make America the first place in the world where new equipment, business models and applications can be tested in a real-world, revenue-generating scenario. Basically, the ruling opens up the U.S. spectrum to the future of wireless, whatever that will look like, by offering unprecedented bandwidths and frequencies. As the race to 5G unfolds, America will be the most important race track because of these FCC regulations that will permit rapid deployment.

The day after the FCC action, the White House announced an Advanced Wireless Research Initiative including significant funding for broadband initiatives lead by the NSF—How does this work with the FCC announcement for 5G research and development activities?

The NSF has traditionally done a good job funding academics who are pursuing new ideas for the future of wireless communications, but it was not always this way. As a young professor, I was concerned about the U.S. research complex developing knowledge for the wireless industry, and in 1991, I wrote a paper called “The Wireless Revolution”— it was a call for the NSF and the U.S. research community to realize that wireless would be foundational to the future of the U.S., while Europe was way ahead on that vision at the time.  Since then, NSF and DARPA have realized the importance of wireless communications. The four test beds (Platforms for Advanced Wireless Research—PAWRs) announced by NSF on July 15 will enable academics to work with industry to test new concepts and ideas that are perhaps too immature or bold to be deployed on commercial networks. It was a nice announcement to ensure that U.S. research could play a role in the wireless future.

What are some of the expected initiatives that you think will be funded first?

Two of the four announced PAWRs will likely be funded first by NSF, and I suspect the winning test beds will require close coordination with several academic institutions that want to run national research platforms, along with a strong industrial backing and a strong connection with local government.  Also, NSF will continue to fund individual principal investigators, as well as collaborative teams in new initiatives such as Information-Centric Networking and Wireless Edge Networking.

What are some of the leading applications you expect to be enabled by mmWave 5G technologies?

Massively broadband wireless applications, such as wireless displays, memory transfer/backup, 3D/virtual reality, gaming solutions and personal radar/sensing applications will emerge first. Wireless replacement of all kinds will evolve, including triple play offerings to rural customers and new business applications using the wide bandwidths now available.  New types of repeater devices (to extend wideband coverage due to the power versus bandwidth trade-off), networking protocols to enhance caching and security, and new spectrum sharing technologies that enable real time sensing and service provisioning will evolve (based on the FCC’s July 14 rulemaking).  The Internet of Things (IoT) is already evolving, and new products and services will emerge that exploit both the vast new bands available for unlicensed devices as well as 5G services.

How is mmWave technology going to work with all of the other new technologies expected to be part of 5G systems?

As has occurred in all past cellular generations, the newest generation is first deployed with a carefully planned dovetail into the existing network, and over time, the networks, infrastructure and consumer devices are upgraded and morphed into the latest generation. I suspect you will see 5G mmWave deployments in urban cores and rural settings first, as an up-banded option for legacy 4G LTE (that continues to be improved). The directionality of mmWave channels will require new antenna technology and will especially exploit small cell architecture in urban/indoor deployments, as well as highly directional phased array antennas for rural deployments. Over the next decade, the sheer bandwidth available at mmWave will bring all of the networks and devices up these higher frequency bands.

It is very gratifying to know that our research at NYU WIRELESS, and my involvement in millimeter wave research over the past 20 years, has made an impact on humanity. There are a great many students who worked tirelessly to show that millimeter waves will work in mobile settings, when most of the world did not think that could ever work. This is our job in academia and why I continue to work at the University—to pursue knowledge that benefits industry while offering educational opportunities to bright, hungry students who are destined to change the world. I often tell students that our job as researchers is to “put ourselves out of business”—to let everyone know what we have learned, so that we are forced to go out and learn something new again, and to then again tell the world what we know to put ourselves out of business, and on and on, as we continue to push the envelope forward. I am very blessed to have the job I do, to be engaged with wonderful young people who will do great things, to work with industrial sponsors that have an interest in our work and students, and to be able to interact regularly with industry and start-up companies.

For more information on the research at NYU Wireless, visit http://wireless.engineering.nyu.edu/5g-millimeter-wave-channel-modeling-software/.