We use cookies to provide you with a better experience. By continuing to browse the site you are agreeing to our use of cookies in accordance with our Privacy Policy.
Home » SMART Bluetooth enabled bike lock uses what could be the world’s smallest chip antenna
Industry News IoT/M2M/V2V Channel 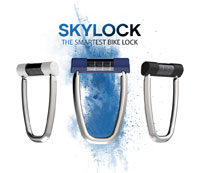 Antenova is no stranger to requests from its customers to cram its tiny antennas into various M2M and Internet of Things (IoT) applications, from wearable glucose monitoring sensors to SMART watches. Now the latest application is a SMART Bluetooth-enabled, solar-powered bike U-clamp lock from Lattis.

Last year, as Lattis was perfecting the design of the Ellipse bike lock, they needed to conduct RF tests to be certain of good RF performance over sufficient distance, so they contacted Antenova for assistance with the testing and integration of the antenna.

Antenova’s experts were able to advise Lattis with Gerber file reviews and offer valuable engineering integration services to speed the design-in process, such as matching circuit design and RF pattern measurements, to enhance the performance of the antenna within the device. “Careful consideration needs to be made to antenna placement and layout”, says Chris Tomlin Antenova’s Antenna Applications Director.

Norm Smith says, “What makes the Weii antenna so suitable for this small form-factor device is the magnetic dipole topology, which lends itself very well to being in close proximity to a large mass of metal without being subject to the usual detuning that normally occurs. This same feature, that several of Antenova’s other antennas utilize, allows the antenna to be used on wearable applications, such as wrist watches, whereby the loading effect of the human body does not detune the antenna performance. Other IoT applications also benefit from this type of antenna topology, for example wireless door sensors, where the end user environment cannot be well controlled, thus there is a need for a stable antenna.”

Jeremy Ricard, co-founder of Lattis, which developed the Ellipse lock, says, “Antenova’s technical sales support and RF integration engineering services really made a huge difference to us in selecting the right antenna for the job, at the best possible price point, and enabling us to get our product performance optimized and fast-tracking our time to market.”