We use cookies to provide you with a better experience. By continuing to browse the site you are agreeing to our use of cookies in accordance with our Privacy Policy.
×
Home » Low Noise, Low SWaP Synthesizers 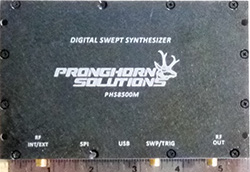 RF/microwave synthesizers are ubiquitous in today’s world — practically in every wireless device, from the smallest handheld to the largest communication towers, in every electronic countermeasure (ECM) and electronic warfare (EW) system, in medical and plasma research, in radio astronomy, in instrumentation and test, in laboratory and production environments.

Pronghorn Solutions has developed a new family of synthesizers, covering 10 MHz to above 24 GHz and offering industry-leading phase noise, frequency resolution of 0.01 Hz, fast switching of less than 100 µs in list mode, low spurious, small size and low power consumption. The products in the PHS8500 family are available in modular (PHS8500M), handheld (PHS8500H) and benchtop (PHS8500B) formats. The benchtop model allows multiple synthesizers in one box, all controlled by a single reference source, with options for multiple tone testing and phase continuous, multiple frequency operation. The handheld and modular systems weigh under 1 lb and consume less than 8 W, with a power saver option for lowering power consumption in airborne units. The handheld unit offers battery operation as an option. The modular version is quite small: 3.5" × 5.5" × 1". With these three configurations, the PHS8500 family is suited for production and operational test, laboratory test and field applications.

Phase-lock loop (PLL) synthesizers have been the workhorse in telecommunications, EW, ECM and test and instrument systems for well over 50 years. During this time, PLLs have evolved from complex, typically narrow band designs that were limited to below L-Band frequencies to integrated, multi-octave and multi-decade ICs. Digital processing speeds have also been increasing, enabling direct digital synthesizers (DDS) to reach well over 4 Giga symbols per second (GSPS). Direct analog synthesizers (DAS), which derive the desired frequency by combinations of multiplying and mixing a reference signal, have become smaller and achieve wider bandwidth, using ever-shrinking IC designs. The patented PHS8500 family uses a combination of the best characteristics of PLL, DDS and DAS technologies to create superior performance in a low power consumption, flexible package — a specific goal of the design team. 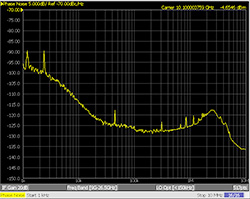 The PHS8500 operates from an internal 100 MHz temperature-compensated crystal oscillator (TCXO). It can also use an external 10, 100 or optional 1000 MHz reference. The phase noise close to the carrier (< 300 kHz) and stability of the synthesizer are directly related to the reference noise (see Figure 1).

In the PHS8500 synthesizer, the DDS is operated in a region that eliminates any spurious using special filtering and wave-forming circuits, to assure optimum performance. The DDS allows modulation (an option), a limited range of continuous sweep, phase coherent small-step switching and other characteristics that make the PHS8500 a very flexible synthesizer. The DAS is used to achieve excellent close-to-carrier phase noise at all frequencies. Combining the three, the PLL assures broadband, quick switching; DAS assures close-to-carrier phase noise that is essentially at the level of the reference source; and DDS provides extremely small frequency step sizes, excellent modulation capabilities and phase-coherent frequency changes.

The PHS8500 family enables a product or system design that starts in a laboratory to be transitioned to the field or the production floor seamlessly, with very low capital cost. The primary software interfaces to the instrument, via SCPI-compliant USB or SPI drivers, are identical in all three models. The benchtop, handheld and modular units all come with a flexible and industry standard SCPI-compatible interface. These include USB port and SPI ports. The benchtop model adds a built-in LAN interface, so that the instrument can be wirelessly controlled as part of an Internet of Things (IoT) network. An external LAN interface is also available as an option for the modular version. The handheld unit has the standard SCPI-compatible USB interface. All PHS8500 models come with a Visual Studio instrument graphical user interface (GUI), which can be used as a front panel control with a PC. The benchtop and handheld models have a convenient 4 × 4 keypad, allowing most of the synthesizer’s functions to be entered and displayed on a backlit LCD display.

The PHS8500 family was designed for low power consumption. Operating from a single positive 8 V DC power supply, total current draw of the modular unit is less than 1.0 A, giving a total power consumption less than 8 W. If additional power conservation is needed — during non-operational states of the synthesizer, for example — an option allows the total power consumption to be reduced to under 1 W with a simple command. The external 120/240 V AC power cord in the benchtop and handheld models externally converts the line voltage to an 8.4 V DC output that plugs into the instrument. The handheld unit has an optional, externally rechargeable battery pack that can be used for field operations.

The PHS8500 family excels in all applications: production testing, laboratory product development, field testing and alignment and other embedded applications. For those who want to embed the synthesizer in a custom system — within a PXI, other module or special purpose instrument — the PHS8500X is offered as a customer-specific, board-level synthesizer that can plug in to many systems. Pronghorn plans to add models to the family, which will offer lower phase noise and other performance enhancements.