We use cookies to provide you with a better experience. By continuing to browse the site you are agreeing to our use of cookies in accordance with our Privacy Policy.
×
Home » Skyworks names Liam K. Griffin as CEO; David J. Aldrich to become executive chairman
Industry News 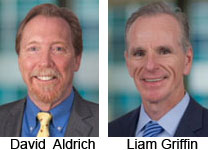 Skyworks has substantially outpaced the broader semiconductor market: growing the top line at a 25 percent annual rate from $1.1 billion in fiscal 2010 to over $3.2 billion in fiscal 2015. In parallel, the company has maintained a rigorous leadership succession planning process to ensure the organization continues to follow this path of success going forward.

"I am delighted to announce that Liam Griffin has become Skyworks' chief executive officer as we capitalize on the enormous global mobility and Internet of Things opportunities ahead of us," said Aldrich. "Liam has a demonstrated track record of success and our proven partnership over 15 years makes him my logical successor. He is a highly energetic and motivating leader who is widely respected amongst our customers, partners, suppliers and investors as well as the entire Skyworks employee base. Liam has the unique ability to translate challenging operational plans into market outperformance through his intense focus and unyielding tenacity. I am confident Liam is the right person at the right time to lead Skyworks into the next frontier and I look forward to supporting him in my new capacity as executive chairman."

As executive chairman, Mr. Aldrich, 59, will devote his time to supporting the management transition and working with the leadership team to develop Skyworks' long term strategy. Mr. Aldrich has served as CEO of Skyworks and its predecessor Alpha Industries, since 2000. During that time, annual company revenue grew from $126 million in 1999, when he became president and chief operating officer, to over $3.2 billion as of fiscal 2015, while operating income increased 7,477 percent.

Mr. Griffin, 49, joined Skyworks in August 2001 as head of sales and marketing. Since that time his responsibilities have continuously expanded with his leadership of Skyworks' business units, R&D efforts and operations. In 2011, he was promoted to executive vice president and in May 2014 was named company president. Mr. Griffin has been a key architect of the company's strategy to cement its leadership position in mobile communications while diversifying across the Internet of Things.

Before joining Skyworks, Mr. Griffin was the vice president of worldwide sales at Dover Corporation and held product management and process engineering positions at AT&T's Microelectronics and Network Systems' businesses. Mr. Griffin received a Bachelor of Science degree in mechanical engineering from the University of Massachusetts and a Master of Business Administration degree from Boston University.

"I am honored to have been chosen by Dave and the Skyworks board to lead our great company," said Griffin. "Over the past 17 years, Dave Aldrich's vision and leadership have built Skyworks into one of the largest and fastest growing semiconductor companies in the world. We have created an awesome platform for analog, mixed signal and RF product integration leveraging our OEM relationships and operational scale. I assume this new leadership role deeply humbled yet highly confident in Skyworks' future. I look forward to continuing to work closely with Dave and building upon all of his achievements while ultimately realizing our vision of connecting everyone and everything, all the time."