We use cookies to provide you with a better experience. By continuing to browse the site you are agreeing to our use of cookies in accordance with our Privacy Policy.
Home » Passport to IMS promotion returns to IMS2016
Industry News MTT-S IMS 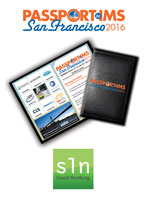 Sheppard Leger Nowak Inc. and Microwave Journal have teamed up again on Passport to IMS, their annual show promotion to take place during the upcoming International Microwave Symposium event in San Francisco May 24-26, 2016.

The Passport to IMS promotion allows show attendees to win prizes on a daily basis by visiting a series of sponsoring exhibitor booths, and having their Passport to IMS booklet stamped by booth personnel.

To participate, passports can be picked up at any of the participating sponsors booths, and completed stamped passports are to be delivered to Microwave Journal's Booth 1410. Winners are announced daily during the IMS show. Having founded the Passport to IMS in 2012 in Montreal, this year marks the fifth anniversary of the show promotion, and we are excited to have Modelithics returning as a participating sponsor— who is celebrating their 15th anniversary this year.

For further information visit www.landingportal.com/PassportIMS and/or contact Jaime Leger who will be available at IMS and reached at 401 487 8566, leger@slnadv.com.

Get your Passport to IMS 2012 Montreal stamped for great prizes