We use cookies to provide you with a better experience. By continuing to browse the site you are agreeing to our use of cookies in accordance with our Privacy Policy.
×
Home » Computing Thermal Resistance of PCB-Mounted MMIC Devices

Temperature has a direct impact on the operating performance and reliability of semiconductor devices. Devices that operate at high junction temperatures for long periods of time can sustain permanent damage sooner, compromising reliability and shortening operating lifetime. For thermally related failures, the life of a MMIC component is directly related to the temperature at the hot spot of the semiconductor die in the device which is mounted on a printed circuit board (PCB). It is therefore critical that designers understand the thermal properties of a PCB design for a given MMIC device in order to minimize thermal resistance and temperature rise.

This article discusses a simple method for computing thermal resistance between a MMIC amplifier and the ambient environment. The temperature rise from the PCB to case is calculated based on the thermal resistance of the PCB layout and compared with measured temperatures using thermal photography to validate the accuracy of the calculation method.

A packaged MMIC component consists of a semiconductor die mounted on a lead frame as shown in Figure 1. The die is attached to the lead frame using conductive epoxy and electrical connections from the die to the lead frame are made using wire bonding. The die is covered with a plastic molding compound to protect it from environmental damage and contamination.

This is typically provided by component manufacturers. An example is the Mini Circuits PHA-1+ amplifier for which θjc is 60°C/W. 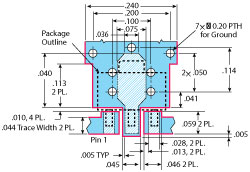 The contribution of solder on the PCB (θsl) is small and not discussed in this article. What remains to be determined is the thermal resistance of the PCB which is dependent on PCB design. A thermal design using the PHA-1+ as an example is described.

The amplifier operates on a single +5V power supply and is housed in an industry standard SOT-89 package. The suggested PCB layout is shown in Figure 2. The layout must accommodate both the electrical requirements of the device (such as proper line impedance, DC bias, grounding, bypassing, etc.) and the thermal requirements. Via holes in the PCB play an important role in providing good electrical and thermal paths to ground. The recommended PCB layout consists of 7 via holes under and around the amplifier unit.

The thermal resistance (θ) of a single via hole can be calculated using Equation 2:

For an unfilled via:

Note that the difference between do and di is the copper thickness. 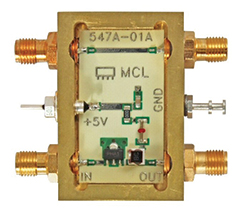 Substituting Equation 3 into Equation 2, the thermal resistance of a single copper via is expressed as:

Equation 4 implies that θdecreases as: 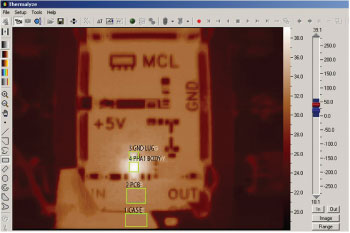 This is a first order approximation temperature rise from the device case to the ground lug.

To validate the accuracy of these calculations, a +5V supply is applied to the DC terminal of the test circuit shown in Figure 3, with measured DC current of 0.165A. After temperature stabilization, a thermal photograph is taken of the case, PCB, ground lug and amplifier body (see Figure 4). Table 1 compares measurement results with the calculations.

The measured (mean) temperature of the case (assuming it is the same as the bottom of the PCB) is 32.7°C; the measured (mean) temperature of the ground lug is 36.1°C. Therefore the measured temperature rise from case to ground lug is 3.4°C, which is the same as the computed value. The method for calculating thermal resistance shown in this article therefore allows designers to predict temperature rise without the need for sophisticated thermal analysis tools and software. This is a useful tool in designing a PCB to minimize thermal resistance.

The thermal resistance from case (or bottom of PCB) to ambient is: 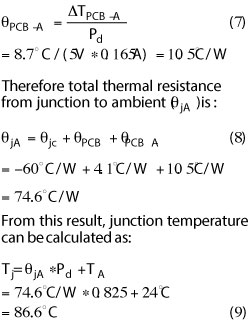