We use cookies to provide you with a better experience. By continuing to browse the site you are agreeing to our use of cookies in accordance with our Privacy Policy.
×
Stay Connected :
Home » What's Driving the IoT? It's Not Just Consumers
IoT/M2M/V2V Channel

What's Driving the IoT? It's Not Just Consumers

The rapid growth of the so-called Internet of Things is having a significant effect on the requirements of future wireless standards such as 5G. In particular, new types of applications requiring high reliability and low latency need wireless technology that is different from what we use today. These emerging requirements will change the way wireless systems are designed, prototyped, manufactured and tested.

Today, we are entering a third era of connectivity — and this era is changing the way we use wireless. In the first era, wired telephony and internet technology were the primary methods connecting homes and businesses. Over the last couple of decades, the second era emerged, and the industry shifted from connecting places using wired technology to connecting people wirelessly.

One example of this shift is the demise of the desk phone. Figure 1 is an example of devices that were once the most important  things on our desks, that are now unceremoniously discarded (I took the photo with a mobile phone, of course). This picture is indicative of NI’s move — and really the industry’s move — to mobile and Skype connections for every employee.

Connecting things is the third era of communications, and the tipping point is happening much faster than many of us realize. Today, there are over 7 billion mobile devices globally connecting over 3.8 billion people. Tomorrow, we will exponentially connect more things than people.  According to a recent estimate in the November 2015 Ericsson Mobility report,1 the number of machine-to-machine (M2M) connections will roughly quadruple to nearly 12 billion over the next five years. By 2030, Ericsson expects that there will be roughly 10 times the number of connected things as connected people.

In the past, consumers have largely dictated the requirements of new wireless standards.  In the future, however, these requirements will be driven by the need to connect machines. The differences in requirements between people and things are clearly defined in the proposed use cases for 5G. As part of its 5G vision, the International Telecommunications Union (ITU) has established three distinct use cases for wireless communications2 — each focused on delivering different performance in terms of latency, throughput, density and mobility (see Figure 2).

The first use case is enhanced mobile broadband (eMBB). We can think of it as the natural evolution beyond LTE and LTE-Advanced. Similar to how the progression from GPRS to HSPA to LTE provided consumers with the benefit of increasingly higher data rates, a future 5G standard will continue this trend. The eMBB use case defines the technical requirements to achieve peak data rates of 10 Gbps — culminating in 10,000 times more total network traffic.

One of the most exciting outcomes of the eMBB requirements is the ultimate adoption of millimeter wave frequencies into mainstream consumer products. Achieving throughputs of 10 Gbps or more requires massively wider bandwidths —  and the necessary spectrum is only available at millimeter wavelengths. 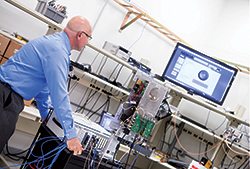 Only a few years ago, the idea of using bands beyond 6 GHz for wireless communications seemed impractical and cost-prohibitive. However, today’s 5G researchers are proving that millimeter wave frequencies are viable for the mass market. As an example, NI recently collaborated with Nokia Networks (see Figure 3) to demonstrate a 5G system capable of delivering 14.7 Gbps at Mobile World Congress 2016 in Barcelona.

Of course, 5G is not the only technology that requires higher throughput — and it is not the only technology utilizing millimeter waves. At present, we are literally months away from having 60 GHz 802.11ad chipsets in mainstream mobile devices and only a few years away from 802.11ay. In the future, these radios might augment 5G mobile networks by delivering throughput of up to 20 Gbps as the “last-mile connectivity” to IoT devices.

With the mMTC use case, key radio requirements include ultra low power consumption and ultra low cost. For these radios, the goal is for a single battery to power the radio for 10 years or more.  On the other hand, uMTC is designed for mission-critical applications. Key uMTC requirements are < 1 ms latency and better than 99.999 percentreliability.

Although the requirements of 5G are an excellent example of how the IoT is shaping future standards development, it isn’t the only example by far. The imminent reality that wireless must be designed to connect things more frequently than it must connect people is already influencing the development of near-term wireless LAN technologies like 802.11ah and mobile technologies like LTE-M.

A Look at LTE-M

LTE for M2M communications, or LTE-M, was first outlined as a part of 3GPP Release 12 in March 2015. LTE-M defines a low cost device category (category 0) for machine-to-machine communications.3 In an effort to save power, new category 0 radios are allowed to support only the 1.4 MHz bandwidth option of LTE and are only half-duplex instead of full-duplex. LTE-M also allows for a longer discontinuous reception (DRX) cycle — enabling devices to have longer periods of inactivity to reduce power consumption further.

Of course, the efforts to evolve LTE for low power operation won’t stop with 3GPP Release 12.  In Release 13, we are likely to see narrowband LTE-M (NB-LTE-M). NB-LTE-M adds a 200 kHz bandwidth option which supports up to 200 kbps downlink data rates with power consumption as low as one-fifth of today’s LTE radios.

Applications for The Industrial IoT

As consumers in an increasingly connected world, it is easy for many of us to imagine how wireless technology will become more embedded in consumer electronics. These applications have the opportunity to affect society in significant and positive ways. Although many of the industrial use cases are less obvious, however, there will ultimately be more of them. 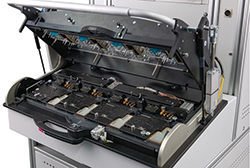 In fact, recent forecasts predict that over the next decade, automotive and industrial IoT (IIoT) applications combined will account for nearly 50 percent of connected things. As a result, wireless will become the technology empowering coordinated traffic lights, automobiles and industrial machines – not just the smart phone. In the end, the sheer scale of  the IIoT will eventually outweigh the consumer IoT in unit volume; even dictating the technologies that we as consumers have access to.

One family of applications where wireless is enabling innovation is the connected car. Those in North America may remember when General Motors introduced the first “OnStar” system on select 1997 Cadillac models. The original system utilized the AMPS4 (pre-CDMA and pre-GSM) mobile phone networks and allowed vehicles to contact a central call center in the event of an emergency. Today, the service uses LTE modems and can even provide Wi-Fi connectivity to passengers within a vehicle.

Although OnStar technology has been available for nearly 20 years, the adoption of cellular modems within an automobile is still relatively low. In 2015, only 20 percent of vehicles sold worldwide contained the ability to connect to a network infrastructure. In the future, this number will approach 100 percent.5 In fact, the European Union recently mandated that after 2018, all new vehicles be equipped with e-call technology — a European equivalent of OnStar that provides crash notifications in the event of an emergency.6 As a result of technologies like e-call, traditional infotainment vendors like Harman are increasing production of modules supporting both Wi-Fi and LTE. This requires investment in new test techniques in manufacturing, such as parallel test (see Figure 4).

Wireless technologies like cellular and automotive radar at 77 GHz have dramatic implications on automotive test methodology. The increasing complexity of the automobile has long required hardware-in-the-loop (HIL) test methods to ensure safety and reliability. As wireless becomes an increasingly mission-critical function of the automobile, engineers are increasingly required to apply the same HIL test techniques to RF systems like 802.11p radios and radar. 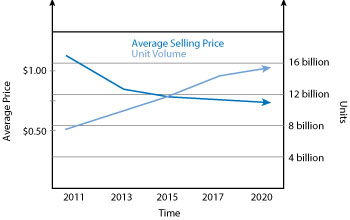 Implications of the IoT for RF Design and Test Engineers

Over nearly four decades, we have observed the price of a mobile phone go from nearly $10,0007 (adjusted for inflation) to less than $100. With today’s mobile technology serving a broader purpose than human-to-human interaction, the cost expectations of the mobile radio must decline even more significantly. As an example, the price target for a NB-LTE-M radio is less than $5.

One of the most telling indicators of the “cost of wireless” can be observed by evaluating the average selling price (ASP) of the semiconductor components themselves. In fact, a recent market forecast by DataBeans predicts that the ASP of mobile device analog ICs will decline by more than 30 percent from 2011 to 2019 (see Figure 5).

It should not be surprising that broader adoption of wireless technology is driving lower costs, and that the falling prices will continue in the era of the IoT. Lower costs, however, have also been associated with an increase in wireless complexity. Just over a decade ago, in 2005, Sprint announced support for world’s first ever “Quad-Band” phone — the Samsung IP-A790. Designed to connect to cellular networks both in the U.S. and abroad, this phone retailed for over $500. Today, a viable mobile phone must support nearly 20 mobile bands (see Figure 6) in addition to multiple Bluetooth, GNSS and even NFC technologies. Over the next few years, mobile devices will add millimeterwave bands from 802.11ad, 802.11ay, and 5G—with most devices continuing to support existing bands. As wireless becomes embedded in both consumer and industrial products, the industry is tasked with finding a way to design, test and deploy increasingly sophisticated wireless technology at a lower price and with a smaller footprint than ever before. 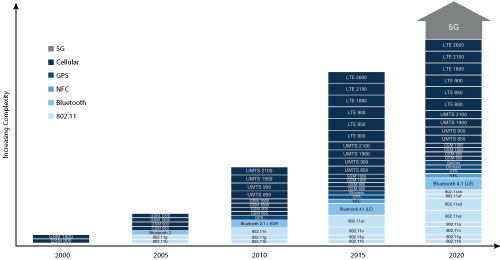 I remember working with one of the leading mobile phone providers in the early 2000s when they first added Wi-Fi to their phones. This “simple” addition effectively doubled the test time and cost of test in production, while the device sold for roughly the same amount. Today we have added a dozen or more radios, and the cost of devices has fallen. Clearly, the cost of test must continue to scale down significantly. The IoT will hasten this decline, as the volume of IoT devices and subsequent economies of scale drive down the price of wireless.

What Does This Mean for You?

Wireless is increasingly becoming one of the most critical technologies that will make the IoT possible. Given the importance of wireless, the success of the next generation of wireless depends on all of us. Without researchers developing the world’s first prototypes using software-defined radios, 5G would not be possible; of course, 5G will not be practical if design and test engineers cannot solve the next challenge, which is to design and manufacture millimeter wave radios in a cost-effective manner.

Thirty years ago, many of us saw first-hand how the commoditization of the PC created dramatically new expectations for cost, performance and size. Today, the same thing is happening in wireless. From the PA, to the mobile phone, to the test equipment we develop at NI, all of our products must become smaller, more power efficient and less expensive. The days of $6 mobile PAs and six-figure spectrum analyzers are long gone. It is time we embrace the future.

Publish or Perish: It’s Not Just for Academics Anymore

It’s Not Just About SWaP Any Longer