We use cookies to provide you with a better experience. By continuing to browse the site you are agreeing to our use of cookies in accordance with our Privacy Policy.
×
Home » Finmeccanica announces €120 million air traffic control contracts
European Industry News Industrial/Scientific/Medical Channel Industry News 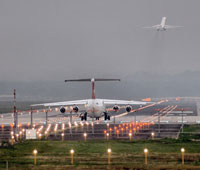 Finmeccanica has been awarded Air Traffic Control contracts totaling around €120 million. After the recent successes in Italy, Canada and Singapore, the Finmeccanica Security and Information Systems Division will provide Air Traffic Management/Air Traffic Control (ATM/ATC) systems in Malaysia, Saudi Arabia and Morocco. These countries will join the list of more than 150 countries already using the innovative, proprietary technological solutions based on efficiency, safety, performance and environmental sustainability.