We use cookies to provide you with a better experience. By continuing to browse the site you are agreeing to our use of cookies in accordance with our Privacy Policy.
Home » Paradise announces breakthrough 100W Ka-Band outdoor SSPA
Aerospace and Defense Channel Industry News 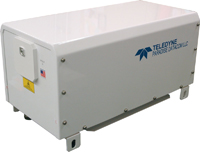 Teledyne Paradise Datacom, a business unit of Teledyne Microwave Solutions, announced the availability of a breakthrough Ka-Band outdoor SSPA that is based on a single 100 watt GaN module. Two and four-module models can generate power levels that exceed those of traveling wave tube amplifiers (TWTAs) commonly used at gateway earth stations today.

With the superior reliability of solid state technology, the new SSPA finally gives operators of HTS and all other gateway earth stations the opportunity to achieve dramatic long-term CapEx savings by deploying high power SSPAs in lieu of TWTAs.

“We believe our development of this new 100W Ka SSPA represents a real game change for the industry,” said Steve Turner, the long-time VP of RF Engineering for Teledyne Paradise Datacom.  “Until now, there has not been a viable option to TWTAs for Gateway operators in need of very high horsepower.  With Model A2100, we have finally brought solid state technology to the point where it can clearly replace that legacy TWTA technology and deliver to Operators a far lower TCO over a system lifecycle.”

The new product, Model A2100, is a compact outdoor SSPA that weighs less than 44 lbs. (20.0 kg).  With a small footprint and leveraging GaN technology, the A2100 produces 100 watts of saturated power and 50 watts of linear power from 27-31 GHz.  When packaged in Paradise’s ‘high power’ outdoor enclosure, it can deliver power levels of 100 watts P-linear/200 watts P-sat and 200 watts P-linear/400 watts P-sat, giving customers an excellent alternative to legacy 500 watt TWTAs.

The A2100 delivers the highest power density in the industry.  With a tough, robust construction built to withstand harsh environments and deliver the highest operational reliability, the A2100 can be used in applications and markets that have historically been reserved for TWTAs.

With an optional side-mount AC input for SNG installations, the A2100’s broad range of linear power and high output are perfectly suited for high-definition SNG vehicles as well as HTS Gateway Earth Stations that require: