We use cookies to provide you with a better experience. By continuing to browse the site you are agreeing to our use of cookies in accordance with our Privacy Policy.
×
Home » Saab receives UK orders for Giraffe radar systems
Aerospace and Defense Channel European Industry News Industry News 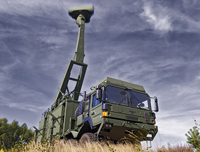 Defence and security company Saab has received orders from the UK Ministry of Defence for additional Giraffe AMB radar systems plus upgrades of the existing systems and associated equipment. The order value is approximately SEK 610 million. Development and production will take place in Gothenburg, Sweden and deliveries will start during the second half of 2015 and continue until 2018.

The Giraffe AMB radar provides a full 360° update of the air situation out to 120 km every second. It can operate in challenging environments such as mountains, complex coastal regions and wind farm areas. The upgrade will take the UK’s existing systems to the same production-build standard as the new Giraffe AMB, enhancing the primary radar’s performance and capacity. It also keeps the UK’s radars in line with the Giraffe product roadmap. This, in turn, will enable the addition of a capability to spot small UAS vehicles and the capacity to screen out difficult radar ‘clutter’, such as birds.

“We are delighted to have agreed this significant expansion and upgrade of the Giraffe AMB fleet with the UK MoD. We are looking forward to supporting both potential mission deployments and further system evolutions based on our spiral development plan for Giraffe,” said Micael Johansson, head of Saab business area Electronic Defence Systems.

The multi-mission Giraffe AMB surveillance radar system was first acquired by the United Kingdom in 2008 as part of the Land Environment Air Picture Provision (LEAPP) programme. Since deliveries started in 2010 it has been used to provide the real-time air picture in support of airspace management on deployed operations and at major events in the UK. It has also made a vital contribution to force protection through the detection and prediction of impact of incoming rockets, artillery shells and mortars.

The Giraffe AMB is part of Saab’s Giraffe product family that includes high-performance air and sea surveillance and target indication radars, covering very short to long ranges. The Giraffe also has essential command and control for ground based air defence and sense-and-warn applications.