We use cookies to provide you with a better experience. By continuing to browse the site you are agreeing to our use of cookies in accordance with our Privacy Policy.
Home » History of Wireless Communications

A historical listing of important events that shaped wireless communications

1853 – William Thomson (Lord Kelvin) calculated the period, damping and intensity as a function of the capacity, self-inductance and resistance of an oscillatory circuit.

1857 – Feddersen verified experimentally the resonant frequency of a tuned circuit as suggested by Helmholtz in 1847.

1883 – Irish physicist and chemist George Francis FitzGerald published a formula for the power radiated by a small loop antenna.

1884 – German physicist Heinrich Rudolf Hertz wrote Maxwell’s equations in scalar form by discarding the concept of aether reducing it from 20 to 12 equations.

1886 – Heaviside introduced impedance as the ratio of voltage over current. Hertz started his work to demonstrate the existence of radio waves and published his results in 1888.

1890 – Lecher used standing waves produced in parallel wires to measure frequency. Tesla introduced high frequency currents in therapeutics as he observed that current of high frequency could raise the temperature of living tissue. Tesla also patented his Tesla Coil which was used later in every spark gap generator to produce high frequency signals. Heinrich Rubens and R. Titter made a sensitive bolometer which measured the intensity of electromagnetic waves by means of the heat generated in a thin wire. 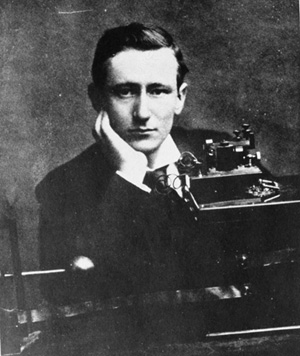 1895 – Marconi transmitted and received a coded message at a distance of 1.75 miles near his home in Bologna, Italy. Indian physicist, Sir Jagadis Chunder Bose generated and detected wireless signals and produced many devices such as waveguides, horn antennas, microwave reflectors and more.

1897 – Marconi demonstrated a radio transmission to a tugboat over an 18 mile path over the English Channel. The first wireless company, Wireless Telegraph and Signal Company was founded – they bought most of Marconi’s patents. Lord Rayleigh suggests EM wave propagation in waveguides and analysis of propagation through dielectrically filled waveguides. Lodge patented various types of antennas.

1900 – Tesla obtained patents on System of Transmission of Electrical Energy which the US recognized as the first patents on Radio. Tesla is the first person to describe a system of determining the location of an object using radio waves – Radar.

1904 – Frank J. Sprague developed the idea of the printed circuit. W. Pickard filed a patent application for a crystal detector where a thin wire was in contact with silicon. It was the central component in early radio receivers called crystal radios.  J. C. Bose was granted a patent on point contact diodes that were used for many years as detectors in the industry.  Fleming suggested the rectifying action of the vacuum-tube diode for detecting high frequency oscillation – the first practical radio tube.

1906 – Lee de Forest patented the general principle of omni-range using a rotating radio beam keyed to identify the sector forming 360 degree sweep of the beam. He also invented the three-electrode valve or vacuum tube triode that was instrumental in the development of transcontinental telephony in 1913. Poulsen transmitted music by wireless using an arc transmitter with 1 kW of input power and a 200 feet high antenna that was heard 300 miles away.

1909 – Marconi and Braun shared the Nobel Prize for Physics for their contributions to the physics of electric oscillations and radiotelegraphy.

1911 – Von Lieben and Eugen Riesz developed a cascade amplifier. Hugo Germsback, an American novelist, envisaged the concept of pulse radar in one of his works where he proposed the use of a pulsating polarized wave, the reflection of which was detected by an actinoscope.

1911 – Engineers start to realize that the triode can also be used for transmitter and oscillator – the three-electrode vacuum tube was included in designs for telephone repeaters in several countries.

1912 – G. A. Campbell developed guided wave filters. Sinding and Larsen transmitted TV by wireless using 3 channels. The Institute of Radio Engineers was formed in the US.

1914 – The German physicist Walter Schottky discovered the effect of electric field on the rate of electron emission from thermionic-emitters named after him. Fleming discovered the atmospheric refraction and its importance in the transmission of EM waves around the Earth. Carl R. Englund was the first to develop the equation of a modulated wave (AM) and also discovered the frequencies related to sidebands. Frequency modulation of a carrier was proposed to accommodate more channels within the available bandwidths.

1915 – Schottky stated work on the space-charge-grid tube and a screen grid tube or Tetrode that achieved good amplification by placing a screen grid between the grid and the anode.

1918 – Armstrong invented the Superheterodyne Radio Receiver using 8 valves – most receivers still use this design today. Langmuir patented the feedback amplifier. E. H. O Shaughnessy development of direction finding was one of the key weapons in England during WWI – Bellini-Tosi aerials were installed around the coast to locate transmission from ships and aircrafts. Louis Alan Hazeltime invented the neutrodyne circuit with tuned RF amplifier with neutralization.

1923 – The decibel (1/10th of a bel, after A. G. Bell, inventor of the telephone) was used to express the loss in a telephone cable. H. W. Nichols developed point-to-point communication using single side-band communication. D.C Prince analyzed Class A and Class C amplifiers. Scottish engineer Antoine Logie Barid built and patented the first practical TV. Watson-Watt perfected the radiolocation device by displaying radio information on a cathode ray oscilloscope telling the radar operator the direction, distance and velocity of the target. Ralph Vinton Lyon Hartley showed that the amount of information that can be transmitted at a given time is proportional to the bandwidth of the communication channel. H. Flurschein filed a patent on radio warning system for use on vehicles.

1924 – J.R. Carson showed that energy absorbed by a receiver is directly proportional to its bandwidth and extended Lorentz’s reciprocity theory to EM fields to antenna terminals.  Lloyd Espenschied invented the first radio altimeter.  The mobile telephone was invented by Bell Telephone Company and introduced to NYC police cars.

1925 – First conference on frequency allocation was held in Geneva. Joseph Tykocinski-Tykociner demonstrated that the characteristics of a full size antenna can be replaced with sufficient accuracy from measurements made on a small short wave in the rage of 3 to 6 m.

1928 – Baird conducted the first transatlantic TV broadcast and built the first color TV. Nyquist published a classic paper on the theory of signal transmission in telegraphy. He developed the criteria for the correct reception of telegraph signals transmitted over dispersive channels in the absence of noise. C.S. Franklin patented the coaxial cable in England to be used as an antenna feeder.

1929 – L. Cohen proposed circuit tuning by wave resonance (resonant transmission line) and its application to radio reception. H.A. Affel and L. Espenscheid of AT&T/Bell Labs created the concept of coaxial cable for a FDMA multi-channel telephony system. K. Okabe made a breakthrough in cm-waves when operating his slotted-anode magnetron (5.35 GHz). Hans Erich Hollmann patented the idea of a reflex klystron with his double-grid retarding-field tube. W.H. Martin proposed the Decibel as a transmission unit.

1931 – H. diamond and F. W. Dunmore conceived a radio beacon and receiving system for blind landing of aircraft. H. E. Hollmann built and operated the first decimeter transmitter and receiver at the Heinrich Hertz Institute. He called the device the magnetron.

1934 – The Federal Communications Commission (FTC) was created in the US. W.L. Everitt obtained the optimum operating conditions for Class C amplifiers. F. E. Terman demonstrated a transmission line as a resonant circuit. German physicist Oskar Ernst Heil applied for a patent on technology relating electrical amplifiers and other control arrangements that was the theoretical invention of capacitive current control in FETs.

1935 – C. J. Frank of Boonton Radio Corp demonstrated Q-meter at the fall meeting of IRE – the ratio of reactance to resistance of a coil as its “Quality Factor” was first suggested about 1926. A French TV transmitter was installed on top of the Eiffel Tower. Watson-Watt developed and patented the first practical radar for use in the detection of airplanes in England. H. E. Hollmann filed a patent for the multi-cavity magnetron (granted in 1938).

1971 – Statek began manufacturing and marketing quartz oscillators that were made using their patented photolithographic process.